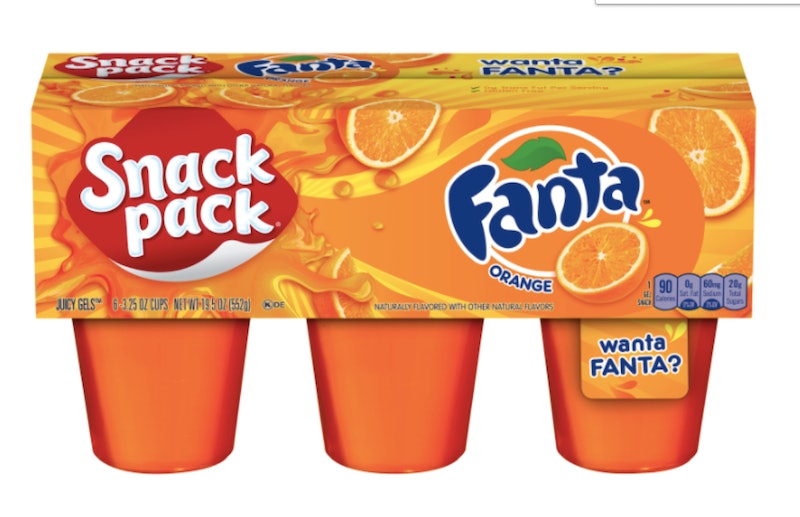 And today in snack-related news that will press all of your nostalgia buttons, we have this: Fanta-flavored Snack Pack is on the way, letting you literally drink orange soda (or grape soda, or pineapple soda, or whichever fruit-flavored Fanta option is your favorite). Food Business News reports that Snack Pack parent company Congara Brands revealed the snack on the show floor of the 2019 National Association of Convenience Stores (NACS) annual trade show, which is currently running from Oct. 2 to Oct. 4 in Atlanta. Details are scant so far, but if you grew up munching on Snack Pack and swilling Fanta, odds are you’ll want to pick these suckers up once they’re finally available.

NACS was originally founded in 1961 and now represents nearly 3,000 retail and supplier company members. Although the trade association has held annual meetings every year since its founding, it wasn’t until 1976 that the first exhibition was included; what’s more, it took another decade for a full-on expo to become an annual event. These days, though, the NACS show occurs every year, rotating between Chicago, Las Vegas, and Atlanta as its location. In the past 25 years, the number of attendees has grown from around 16,000 to roughly 25,000, making it one of the biggest food-centric trade shows around.

A huge variety of brands debut new snacks, sweets, and other foodstuffs at NACS every year, so it’s no surprise that Congara revealed some of its new offerings this week. What was something of a surprise was the fact that one of those offerings in particular is a collab with Fanta, which is Coca-Cola brand. There’s no word yet on when the Fanta-inspired Snack Pack varieties will actually arrive on shelves, but flavors will include orange, grape, and pineapple.

But what exactly are the Fanta Snack Packs? Many of us probably think of pudding when we think of Snack Pack; after all, that’s what the brand was known for when it was originally launched in 1968. But — thankfully — that’s not actually what the Fanta-flavored version is: It’s described on the packaging as a “Juicy Gel,” which is more akin to Jell-O or other, similar, gelatin-esque desserts than to a creamy, dairy-based pudding. (Snack Pack’s Juicy Gels contain no actual gelatin, by the way; indeed, the fact that they’re certified kosher is one of their selling points. They’re also gluten-free, for the curious.) In that regard, the Fanta collab makes a bit more sense; the idea of a dairy-based grape pudding snack is… uh… not super appealing, but the idea of a grape gelatin snack is A-OK.

I am admittedly not the target audience for this particular snack; I am into neither Fanta nor gel-type snacks. I am, however, intrigued by the idea of a snack that isn’t so much fruit-flavored, but rather flavored like another thing that’s fruit-flavored. I can only assume that what sets a Fanta Orange Snack Pack Juicy Gel apart from a regular old Orange Snack Pack Juicy Gel is that it’s not orange-flavored; it’s orange soda flavored. That’s… interesting to me.

Then again, maybe I’m over thinking it. It is, after all, just a snack — even if it happens to be one that’s particularly nostalgia-inducing for a lot of people.

In any event, it’s not yet known when the line of Fanta-flavored Snack Packs will be arriving in stores, so keep your ear to the ground for information. There might be more snacks to come before NACS wraps up on Friday, as well; stay tuned to both trade publications and social media for more sweet and/or savory tidbits as the week concludes.