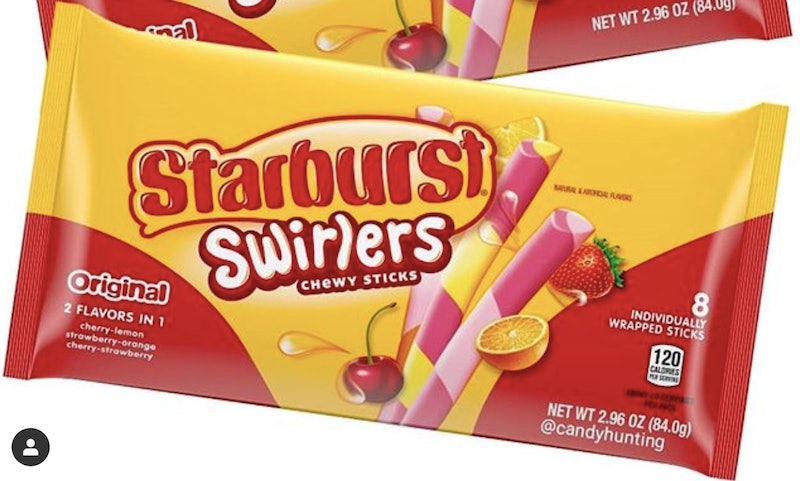 In the Great Starburst Debate, I always come down firmly on the side of pink Starbursts being the best Starbursts — but you know what’s even better than any single Starburst flavor? Starburst flavor combinations. And hey, guess what? There’s a new treat on the way that capitalizes on just that: Starburst Swirlers are coming in 2020, gifting us with chewable, snackable, stick-shaped Starbursts that twist together two flavors, all in one go. No longer will you have to cocktail your own Starburst flavor combos; you’ll be able to indulge in the three best ones right out of the bag. Heck, and yes.

Mars Wrigley revealed the new treats on Wednesday as part of the 2019 National Association of Convenience Stores (NACS) annual trade show, which is currently going on at the Georgia World Congress Center in Atlanta, Ga. between Oct. 1 and 4. NACS has been holding annual meetings since the organization’s founding in 1961, with the first actual exhibition occurring in 1976. These days, the trade show rotates between Chicago, Las Vegas, and Atlanta — and each year, tons of new snacks and treats debut during the expo. This year, Mars Wrigley’s offerings include a number of things we’ve already gotten wind of (hi there, Fudge Brownie M&Ms, Skittles Dips, and Zombie Skittles) — but also a few to which we haven’t yet been introduced. And I’m sure I’m not alone in thinking that these Starburst Swirler things are the most exciting of the bunch.

According to Mars Wrigley, Starburst Swirlers “combine flavors consumers know and love into one chewy, juicy stick.” Snack food Instagrammer Candy Hunting, who is currently attending the NACS show, further described them as “long, thin Starburst sticks.” The sticks will be available in three flavors, with each flavor consisting of two iconic Starburst flavors rolled into one: Strawberry-Cherry, Orange-Strawberry, and Cherry-Lemon. So, basically, they’re shaped like Twizzlers, but taste like Starbursts — or, perhaps more accurately, they taste like what happens when you jam two differently-flavored Starbursts in your mouth at once. Or at least, that’s my general understanding of the whole thing. They’ll be available starting in April of 2020.

This is, of course, far from the first time Starburst-branded flavors have appeared in a form other than your standard, square, individually-wrapped Starburst candy; over the years, such items as Starburst candy corn, jelly beans, “sorbet bars,” and even Lip Smacker lip balm have all made their debuts (and to be perfectly honest, I still consider Starburst jelly beans to be among the greatest and most underrated candies ever). It’s also not the only new Starburst treat that’s coming our way soon: A new variety of Starburst gum will also be arriving in 2020.

Starburst gum does already exist — both a Starburst-branded variety of Juicy Fruit gum and a cube-shaped Starburst chewing gum have been on shelves for a while — but this one sounds… intriguing. We don’t have a ton of details yet, let alone any images, but for what it’s worth, Mars Wrigley describes it as coming in a “bottle.” Could it be a sort of spiritual successor to the Bubble Jug gum that was so popular in the ‘90s? We’ll have to wait and see, but, well… hope springs eternal, right?

More food news is sure to come out of the NACS show as the week goes on, so keep your ear to the ground; you never know what else might make a surprise appearance. And in the meantime, be on the lookout for Starburst Swirlers next spring!

More like this
I Tried The $20 TikTok Viral Oishii Strawberries — Here's What I Thought
By Sophie Hanson
On TikTok, A ‘Snackle Box’ Is The Best Way To Pack Charcuterie On-The-Go
By Meguire Hennes
13 Selfie Instagram Caption Ideas That Exude Main Character Energy
By Jessica Booth and Emma Carey
TikTok Is In Its Elle Woods Era
By Meguire Hennes
Get Even More From Bustle — Sign Up For The Newsletter