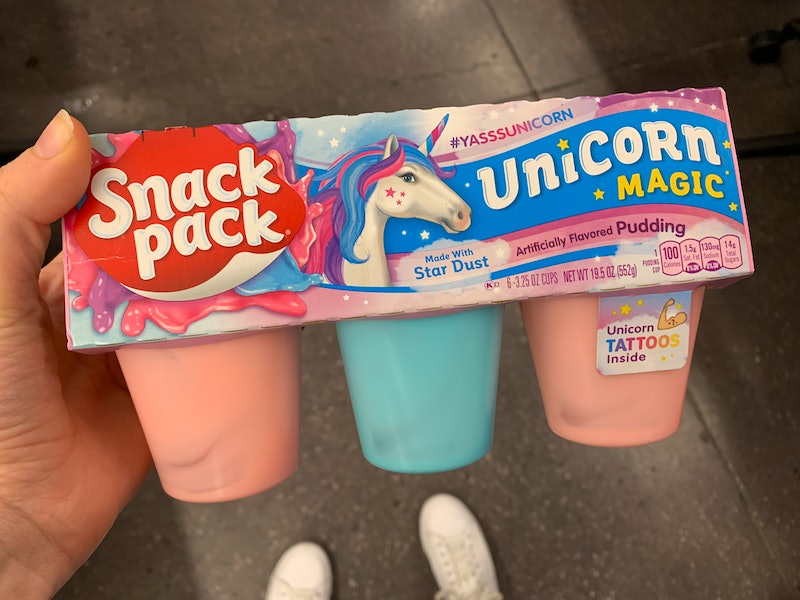 As someone who has identified as part unicorn since the '90s, I am very pleased to announce to all of you that Snack Pack's Unicorn Magic pudding cups have officially hit shelves, in all of their pastel, nostalgia-inducing glory. The new Snack Pack release has been highly-anticipated for those of us on the unicorn food beat — they first previewed at the Sweets and Snacks Expo in May 2018, where popular food Instagrammers snapped photos of the early product and tantalized junk foodies from afar. But then, much like the elusive unicorn itself, the pudding was impossible to find for the rest of the year — that is, until this Year Of Our Continuing Unicorn Obsession 2019, when Snack Packs put it out in the world for all of us to enjoy.

Snack Pack's new addition comes in packs of both pastel blue and pastel pink, which are known as two of unicorns' favorite colors. The cups will sell in stores nationwide in six-packs, with an expected retail price of $2.79 (though truly, can one ever put a price on a portable fairy tale you can eat?). The true selling point on these, though, may not be the unicorn emblazoned on them, or the pastel colors, or even the iconic Snack Pack taste, but the fact that they all come with temporary unicorn tattoos. Be still my dweeby myth-chasing heart.

Now, the flavor of these pudding cups is, quite literally, "Unicorn Magic". For those of you who are wondering what "Unicorn Magic" tastes like, let me be the first to assure you that, while it may not grant immortality (although TBH only time can tell), it is quite delicious. Bustle had the opportunity to try the Snack Packs before they hit shelves, and to my untrained and decidedly un-expert tongue, it does seem as though both colors are a standard Snack Pack vanilla. As someone who is a vanilla pudding stan, I enjoyed this delicious throwback to my recess yard days — and the bonus is that for anyone outfitted with a similar sweet tooth who might have dietary restrictions, the cups are also gluten-free.

Of course, I think the genuine takeaway from this experience is that the pudding inside the pink ones is a millennial pink dream aesthetic, and looks like it will serve as the perfect base for all kinds of pastel, Instagrammy desserts. In fact, Snack Packs is way ahead of me on that, and already launched a page full of cute ideas and recipes to make you a bonafide unicorn dessert social media sensation.

You should be able to find the Unicorn Magic Snack Packs in retailers nationwide, but if you want to be extra vigilant about it, there's also a pudding locator on Snack Pack's website. In the meantime, if anyone needs me, I will be enjoying my afternoon pudding cup snack and startling all the fellow adults around me when I talk to them with a vaguely blue tongue and a temporary unicorn tattoo on my face.