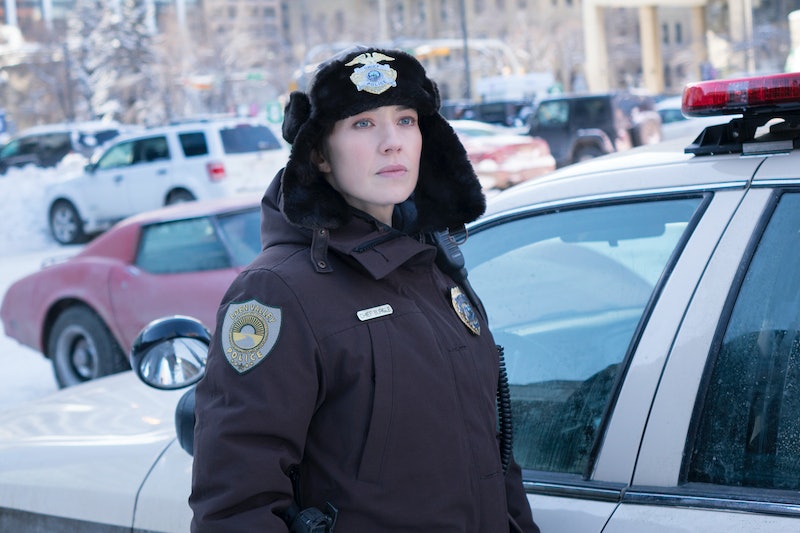 Since it first premiered on FX in 2014, every single episode of the anthology television series Fargo — as well as the 1996 movie it’s originally based on — starts with this handy little disclaimer: "This is a true story. At the request of the survivors, the names have been changed. Out of respect for the dead, the rest has been told exactly as it occurred." But is that disclaimer accurate?Could any of these grisly murders in Fargo, Minnesota or in Sioux Falls, South Dakota have actually happened? Actually, no. Fargo Season 3 is not based on a true story.

The Coen brothers used the disclaimer as a storytelling device for the movie, and so has Fargo showrunner Noah Hawley. The original movie is not a true account of a series of murders that took place in 1987 Minnesota, although that hasn’t stopped fans from trying to guess which real-life crimes might have inspired the pair of filmmakers.

Some cite the Richard Crafts case as an influence. In 1986, according to The New York Times, a Connecticut man was convicted of killing his wife and feeding her body through a wood chipper in 1986. (He entered a plea of not guilty.) Fargo memorably ends with this same method of disposing of a body.

Others used theorize Fargo was based on an account of a St. Paul man named T. Eugene Thompson who was convicted of hiring a hitman to kill his wife. (According to TwinCities.com, he maintained his innocence until his death.) However, when interviewed by The New York Times after Thompson died, Joel Coen admitted that the movie was "completely made up. Or, as we like to say, the only thing true about it is that it’s a story." He also professed to have never heard of Thompson.

Now, Noah Hawley has continued this tradition of claiming that fictional stories are based in truth into the third season of the show. Fargo Season 1 definitely wasn’t a true story, because it intentionally borrowed many thematic elements from the movie. Neither was Season 2, and not just because it straight-up had literal flying saucers in it. (Although, there certainly have been UFO sightings in North Dakota.)

So far there’s nothing to suggest that Season 3 of Fargo will be any less made up, particularly because of how open Hawley has been about his creative process. According to an interview he gave to Entertainment Weekly, he based the entire story of this season on the idea of two brothers played by the same actor — specifically Ewan McGregor, who’ll be taking on the dual roles of Ray and Emmit Stussy.

Even though this new season of Fargo is a brand-new story, it will still bear some connections to the other two seasons, which took place in 2007 and 1979. This time, the plot will travel to 2010. And while it’s unlikely we’ll see too many familiar faces, it wouldn’t be completely out of the realm of possibility for a character to appear across multiple seasons. Perhaps Lou Solverson, who’s been played by both Keith Carradine and Patrick Wilson, will make a short cameo.

The disclaimer serves an important purpose nonetheless. It allows the audience to delude ourselves into thinking that the story is true, which encourages more sympathy for the characters. Of course, judging from the trailers, I don’t think anyone will have had a hard time falling in love with new detective Gloria Burgle, as played by The Leftovers star Carrie Coon. Here’s hoping she survives to the end of the season.