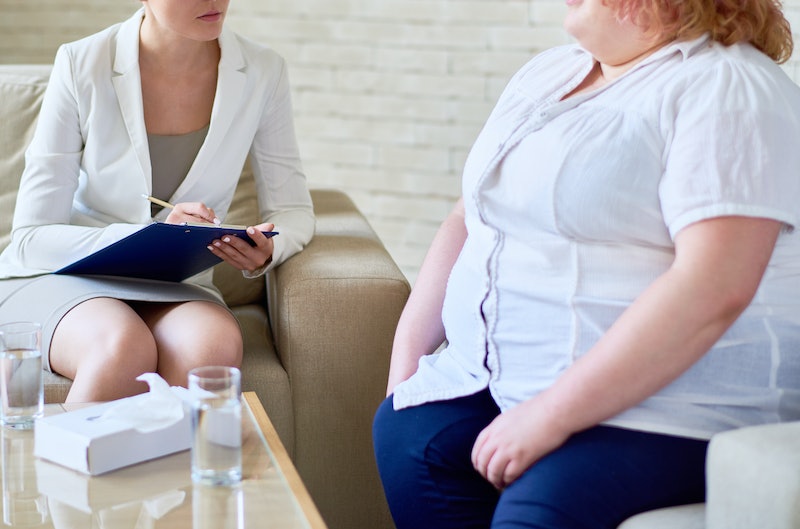 I stared at the referral in my hand for a bariatric surgeon, dumbfounded. “If you lose some weight, you’ll feel a lot better,” my gynecologist told me. I didn’t doubt that the weight I’d gained after six months of near-continuous steroid use was hard on my body, but that wasn’t why I came to the doctor. I’d come because I was having abdominal pain and pain with intercourse. With my history of surgically diagnosed stage IV endometriosis, hypereosiniphilic syndrome, and lupus, “lose weight” isn’t what I’d expected my gynecologist to tell me, especially after I’d presented him with an MRI diagnosing adenomyosis, a condition where endometrial tissue grows into the uterine wall.

It took me approximately 11 more months and four more doctors before I had surgery to treat these issues. But my situation isn’t uncommon. Many other patients report fat-shaming doctors who have overlooked illness, delayed diagnoses, and in some cases, even encouraged eating disorders, simply because their patients had a certain body size.

“At least once or twice a week, I see a patient who comes to me with a concern that a prior medical provider had told them was directly related to their weight or weight gain,” Signey M. Olson, an OB/GYN and endocrinology nurse practitioner at Columbia Fertility Associates, tells Bustle. She believes that many more people have had these experiences but don't talk about them, because people don't want to bring up "previously shameful experiences with the health care system.”

Reina, 24, tells Bustle she first went to an endocrinologist because she had fatigue, irregular periods, and trouble with weight loss; she was concerned about her thyroid due to a family history of hypothyroidism and thyroid cancer. She says the doctor was dismissive of her concerns, saying not to worry and referring her to Weight Watchers. She also says the doctor told her she wasn’t “trying hard enough” to lose weight, which concerned her because she was engaging in behaviors that she now recognizes as disordered eating.

For Evette Dionne, the author of Fat Girls Deserve Fairy Tales Too and editor-in-chief of Bitch Media, her doctor’s focus on her weight instead of her symptoms and her health led to a much delayed diagnosis of heart failure. “In 2016 ... I’d lost a significant amount of weight and I was able to hike and scale mountains," Dionne tells Bustle. “But when I got to New York, I began gaining weight without explanation or cause. I was still exercising as much as I’d been before. My eating habits hadn’t changed at all. And yet, my body felt awful,” Dionne says. She remembers feeling “swollen,” and being short of breath easily, on top of having constant back pain. “When I went to see a primary care doctor, she told me all of my symptoms were caused by my weight, and that I needed to lose more than 100 pounds if I wanted to feel better." By the time the heart problems that ultimately became heart failure were discovered this past May, her heart was only pumping at 16% of its capacity. Dionne says her cardiologist believes hormonal medication she was given to remove her uterine fibroids may have caused her heart problems.

Amber, 44, first started gaining weight around age 11, when her period started. After giving birth to twins at 26, she started taking her health more seriously by finding a primary care practitioner and getting regular checkups, but various problems — everything from neck pains that were actually arthritis to pelvic pain and low energy — were blamed on her weight by doctors. She was told her pelvic pain was because her hormones were “out of whack” because she was fat; she was given antidepressants for her fatigue because they would “make her skinny, and then she wouldn’t be sad,” she says her doctors told her. After Amber's mother passed away from cervical cancer in 2011, she pushed for ultrasounds to get to the bottom of her pelvic pain. She learned she had a golf ball-sized mass on one of her ovaries, and the other ovary was unable to be seen on ultrasound. The masses were removed and biopsied for cancer.

But it was only when her doctors thought she had cancer — which, thankfully, she did not — that Amber ever heard a doctor say she was healthy; the doctor remarked how “great” her labs were. Amber’s cholesterol, triglycerides, glucose, and blood pressure were all within "normal" limits. Amber’s health issues didn’t stem from her weight, but she did have endometriosis. But she wasn’t diagnosed for what she estimates as 20 years because doctors couldn’t see past her body size.

“Clinicians are not immune to these harmful messages that most people have been receiving since childhood.”

“The evidence shows time and time again that weight alone is not even a moderately good indicator of health,” Olson says. “We have evidence that a weight-neutral approach is the healthiest for most bodies long-term, but this is not yet the standard of care for most of our health systems.” Weight neutral means treating patients equally at any body size.

Following her endometriosis diagnosis, Amber was diagnosed with, among other things, Hashimoto’s thyroiditis, which can also cause weight gain. Yet prior to that, no medical professional had ever attributed Amber’s weight to anything but Amber’s lifestyle. Research shows that sadly, society at large believes that fat people have much more control over our weight than we actually do, which is why sustained and permanent weight loss is a mythical unicorn for so many of us.

Researcher Christian Crandall showed how attitudes toward fat people are shaped by the American emphasis on “bootstrapping” — individualism, personal responsibility, and self-discipline — in a 1994 article published in the Journal of Personality and Social Psychology. Doctors, just like the rest of us, have been subjected to this messaging, too. The medical industry’s obsession with dieting is especially damaging, because Olson says that research indicates about 90% of people who lose weight through dieting will gain it back, plus more, within one to five years. “This includes fad diets, and also doctor-prescribed diets such as moderation, portion control, and lower carbs,” she says. “Therefore, these patients are essentially being prescribed diets that are most likely going to fail and result in weight cycling.”

“Fatphobia and diet culture is so deeply ingrained into every aspect of society that everyone, including health care providers, are exposed to it on a daily basis,” Olson says. “Clinicians are not immune to these harmful messages that most people have been receiving since childhood.”

Additionally, a lot of research may be “steeped in weight stigma itself, so it is difficult to separate the actual evidence from perpetuated fatphobia,” Olson says. “Although weight counseling may be well-intentioned, there truly isn’t good evidence to support asking patients to lose weight. Weight is most medically helpful in a few scenarios such as when determining certain medication or anesthesia dosages, tracking pediatric growth charts, and low-weight eating disorder treatment.”

Sam Tryon, a registered dietitian, and Olson are both proponents of the Health At Every Size approach, an initiative started by the Association for Size Diversity and Health (ASDAH). “The concept of Health At Every Size doesn’t say that people are in the body that is healthiest for them, but that people can be healthy at [any] body weight,” Tryon says. This approach suggests that weight isn't the underlying cause of every symptom a patient has — and patients need to get persistent symptoms taken care of, rather than simply "lose weight."

Olson points out that it “doesn’t mean clinicians are seeking to ‘glorify obesity’, a stigma-centered word I would love to see removed from these conversations, but instead support people towards their health goals in the body that they currently have,” Olson says. Research does indeed support findings that you can be “obese” and have no elevated health risks. Other research shows that exercise reduces the health risks normally associated with obesity even if no weight loss occurs, meaning that fitness and health are not about weight. BMI, the standard measure of “obesity,” is largely seen as an inaccurate and flawed measure of health.

If your doctor continues to ignore your signs of illness because of your body size, there are steps you can take to advocate for yourself. Through my experience, I recommend asking for proper tests and procedures to be ordered — and if the doctor won’t order them, ask that they document their refusal in your chart, and request a copy for your records. Boundary setting can be helpful as well; Tryon suggests telling the practitioner, “I’m not interested in talking about my weight at this visit.” Olson says that if you feel comfortable, you can give your provider a pop quiz, asking, “If a person in a lower weight body came to you with the same problem, what treatment options would you give to them?” She says for patients who are in a situation where they can talk openly about weight science research, sometimes bringing in a copy of the latest literature can open the door to conversations. The short answer though? Find a different doctor.

“‘You’re just fat’ is not a diagnosis. Fat patients have to advocate for proper treatment and care, and sometimes, that means experimenting with different doctors until you find one who takes you and your concerns seriously,” Dionne says.

“You absolutely deserve to be able to engage in shared decision making and be able to trust a provider with your most vulnerable health concerns and questions,” Olson says.

This fat girl wholeheartedly and whole-bodily rejects the ideas of paying a $50 copay for a problem visit, only to be told that I need to lose weight, and have my actual issues ignored. Tell me something I don’t know, doc — like what to do about the symptoms I’m telling you about. Anything less is substandard care. I love myself too much — every last pound of me — to stay in a relationship where I’m not being heard, whether it’s a friendship, a romantic relationship, or with my health care provider.

Correction: A previous version of this story misstated the name of the Health At Every Size approach. The story has been updated to fix it.

More like this
Olivia Munn Got Real About How Her Body Hasn’t “Snapped Back” Post-Pregnancy
By Stephanie Topacio Long
I Have Eyebrow Alopecia – & Microblading Gave Me My Confidence Back
By Jessica Morgan
6 Abortion Advocates To Follow On TikTok
By Sara Youngblood Gregory
The UK Abortion Laws In 2022, Explained
By Sophie McEvoy
Get Even More From Bustle — Sign Up For The Newsletter