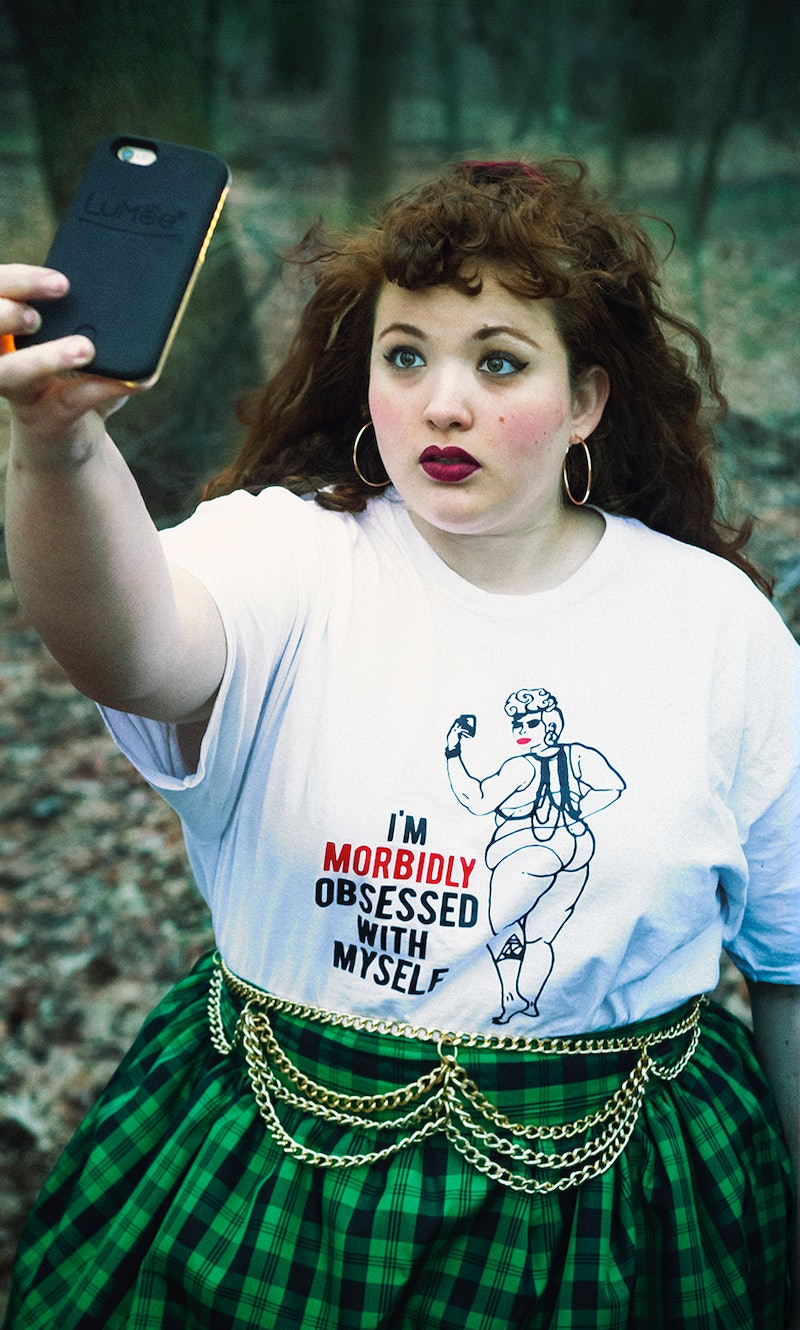 On an autumnal morning in 2013, a stranger emailed me. The subject line of her message succinctly read: "A Note About Your Work." Only a few months into plus size fashion and lifestyle blogging, I blissfully assumed this was going to be my first piece of fan mail: Some kind words about that bikini that showed off my arm cellulite, or the post I penned about eschewing weight loss diets for good.

Instead, it was 800 words on my problematic glorification of obesity and how, as she said, "Individuals like you are poor role models for children and teens." She believed I was encouraging all my readers to gain weight and subsequently grow lethargic and uncaring about their health and appearances. She also believed that I was trying to force people to see beauty in "Something that is, at the end of the day, wholly unattractive."

In the three years since, much of my life has been dedicated to fat acceptance and fat positive work. As a result, I've received more than a few similar criticisms, suggesting that loving your body is good, but glorifying fatness and obesity is not. When these folks throw out the G-word, what they usually seem to be asking is, "Why do you want everyone to be fat?" They also regularly correlate my celebration of fat bodies, my own included, to a disregard for health and wellness. I used to feel the need to defend myself, arguing, "I am not glorifying anything but self-love." Upon much reflection and contemplative evenings alongside tiramisu, however, I realized that glorifying fatness — and, yes, obesity — is precisely what I'm doing.

You see, to "glorify" something does not really translate to "try to convince everyone to want to be/do that thing." One definition of the word that I particularly love is "to cause to be or treated as being more splendid, excellent, etc. than [it] would normally be considered." Another definition is "to elevate to celestial glory," but I don't really consider myself divine enough to have that kind of power over anything — except maybe my own perceptions of Game Of Thrones and the aforementioned tiramisu. Both of these things are, indeed, deities.

When considering fatness and obesity ("obesity" being a term used to describe someone whose Body Mass Index is above 30, from a clinical standpoint, or anyone who is visibly fat, from a colloquial one), few would likely argue that either term is considered positive through the lens of our cultural narrative. Rather, both are typically used in synonymity with terms like "ugly," "unhealthy," "undesirable," "undisciplined," and ultimately "flawed."

I don't doubt that these perceived synonyms contribute to a sociocultural dynamic in which many kids are more afraid of getting fat than of getting cancer; in which fat people often risk increased likelihoods of convictions and decreased chances of receiving proper healthcare at the doctor's office; in which "at least 30 million people of all ages and genders in the United States suffer from an eating disorder," according to The National Association of Anorexia Nervosa and Associated Disorders. I also don't doubt that it's why the token fatty in that movie or show you just watched was probably being bullied or otherwise forced to reflect upon their ~ruined~ body.

You're Doing Something Right If Assholes Hate You Print, $11.91, Redbubble.com/GlorifyObesity

Additionally, suggesting that people love and actively embrace their fat bodies, or consider what a life outside of the confines of diet culture might look like, doesn't mean that I'm saying, "Nobody ever care about health, ever again." Rather, I just want folks to reconsider what it means to be healthy. I'd like to introduce them to research behind the Health At Every Size movement, which has been instrumental in proving that BMI isn't a good scientific measure of health. But I'd also like to remind the universe that mental health is pretty damn important, too.

When we allow our minds to become engrossed in rhetoric that tells us our bodies are a problem to be fixed, we arguably sacrifice quite a bit of it. We also seem to do this when we turn health into a beauty standard of its own. The idea that someone can be fat "as long as they're healthy" suggests that an individual has to be in perfect physical health to be worthy of tolerance from oneself and others.

Glorifying obesity, to me, means a departure from these kinds of ideologies.

It's clear that fatness gets a bad rap. If most humans are taught that being fat is cause for intolerance, mockery, rejection by the mainstream fashion industry, and being seen as "wholly unattractive," then someone has to take a stand in fighting the messaging and elevating the terms and the body types they represent.

That's why it's arguably so imperative that voices within fat positive and size acceptance-geared communities glorify obesity: Treat it as more splendid and excellent than it is normally considered. By doing so, we might just help sprinkle some humanity and acceptance onto the fat people who've long been robbed of both. Not only so that non-fats are forced to confront their prejudices — and make no mistake, fat biases are undeniable aesthetic-based prejudices — but so that fats can feel a little more worthy of self-worth; of living their lives to the fullest without waiting for some unnecessarily coveted "thin person within" to escape the prisons that are their flabby bellies.

Although I understand the reluctance to identify with the glorification of obesity due to the negative connotations of both of these words, I cannot help but feel that it's a crucial aspect of size acceptance. Body positive fashion and lifestyle blogger Corissa Enneking of Fat Girl Flow further put this into perspective when she, too, discussed her personal brand of fat glorification on her site:

My glorification of obesity feels like a rebellion. It allows me to put on a crop top that shows off my VBO when the mood strikes, or a low-rise bikini when I want to sunbathe my muffin top. It allows me to eat whatever foods I want in public without shame, whether that be a four-cheese pizza dripping in grease or an acai bowl from a hipster deli. It allows me to be at peace with feeling beautiful, or not, depending on the day. It also allows me to stray from conventional beauty ideals altogether and redefine what that word means to me. It makes me feel comfortable when I look in the mirror and see a flabby body covered in cellulite and stretch marks looking back at me.

But above all, the glorification of obesity (by size acceptance advocates at large) is hopefully the thing that helps at least a few other people feel like they can do those things, too. Because it's the thing that says, "You deserve to delight in the greasy pizza or the hipster acai bowl, regardless of your waist size. And you deserve to feel like a damn goddess while doing it."