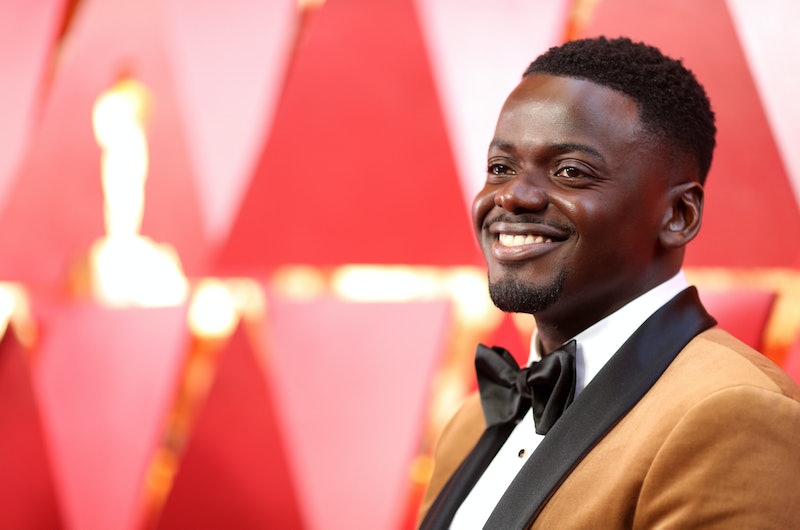 Ever since Rihanna graced the beauty sphere with Fenty Beauty, the internet cannot stop raving about the brand. Whether it's the expansive foundation range or the universality of its products, everything about the brand is magical. As if the internet needed further confirmation, Daniel Kaluuya wore Fenty Beauty Pro Filt'r Foundation to the 2018 Oscars and proved the brand was more magical than ever.

With any awards show comes the ogling over the beauty beats and fashion choices of Hollywood's leading ladies. But this year's Oscar's ceremony proved it's worth paying closer attention to the men strutting down the red carpet. Announcing via their Twitter account that the Get Out star was rocking their brand, Fenty Beauty revealed Kaluuya had put the Pro Filt'r foundation to the test— and boy, did he look damn good wearing it.

Wearing a mix of shades 480 and 490, Kaluuya showed just how inclusive Fenty's formula truly is. But that wasn't even the best part. When the actor embraced director Jordan Peele in a full blown hug, it really got beauty lover's talking. The brand itself even got in on the action, highlighting one major reason the Pro Flit'r is a winner.

Fenty Beauty tweeted a clip of Peele and Kaluuya sharing a congratulatory bro moment. As you can see, Peele walked away from the embrace without even the slightest hint of foundation on his all-white— yes, WHITE— suit.

Marvel at all of the flawlessness before your eyes. That, my friends, is the power of a true transfer-proof foundation at work.

Fenty's tweet bragging about the base said it all, but it was really the Twitterverse's reaction to the major beauty moment that made the foundation worth talking about.

Rih Rih clearly knew what she was doing when she released this non-transferrable gem.

The hug was the ultimate moment of truth that let fans know Fenty's foundation was the real deal.

It's one thing for a foundation to blend into the skin seamlessly and last all day. It's a totally different, jaw-dropping thing when it really doesn't rub off onto clothing.

The real shocker was the fact that the foundation wasn't even topped off with a setting powder.

If nothing else, this Oscars moment was all the publicity the base needed, convincing many beauty lovers who hadn't tried the foundation to make it their next purchase.

Even if it meant making sacrifices, fans were willing to add Fenty Beauty to their stash no matter what it took.

Kaluuya's entire facade was immaculate, leading many to believe that he must have been wearing other Fenty products.

But really it was just the Pro Filt'r Foundation working miracles all on its own, and that was enough to convert many Twitter users into Fenty Beauty believers.

Although the foundation has yet to win any major beauty awards, the Twitterverse believed this moment showed the brand deserved some sort of recognition in the form of physical hardware. After all, a foundation that doesn't budge surely involves witchcraft.

If there's anything to be gained from Kaluuya testing the Fenty Beauty waters, it's that this is one hell of a foundation. It's no wonder there has been nothing but constant hype surrounding the brand.

It hasn't even been six months since Fenty Beauty's launch and it's already defying all of the odds. Seriously, a foundation that truly stays put? There's really no beating that.

Their tweet may not have been intended as advertisement for the foundation, but this is arguably one of the best marketing moments for Fenty Beauty. All it took was one quick embrace, and the internet is going crazy over the brand all over again.