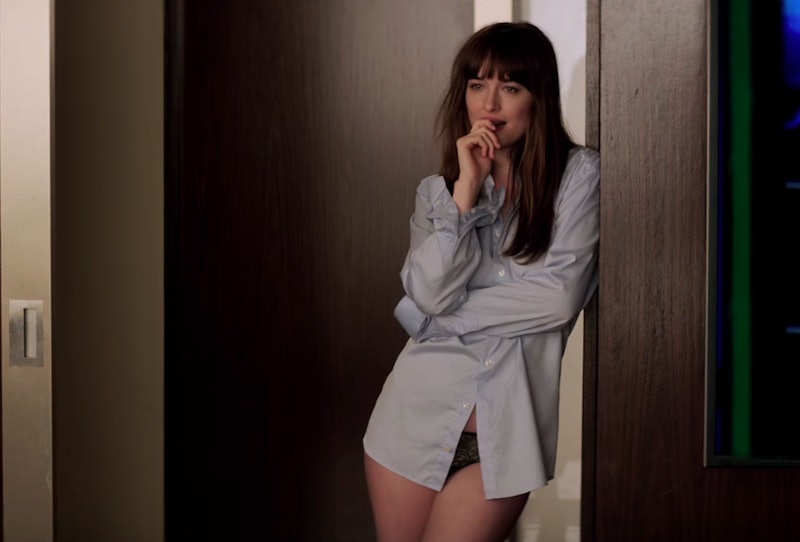 Fifty Shades Darker's sex scenes are engineered to intrigue and excite women watching the film, with each encounter between the Anastasia Steele and Christian Grey focused on female pleasure. Ana's sexual desires, not Christian's, comes first, even when he slips into his dominant persona. More than one sex scene involves Christian going down on Ana, something not typically included in onscreen foreplay. And, when it comes to more of the "kinky f**kery" scenes, in which Christian becomes entirely dominant, it's still all about what will bring Ana pleasure. In one sex scene, she asks him to spank her, and in another, she chooses a sex toy out of the red room of pain and demands to use it. The camera emphasizes Ana's emotions and reactions, with plenty of close ups of her breathless face, making clear that these sex scenes are for her, and therefore also for the women in the audience.

Most R-rated Hollywood films pander to men's sexual desires; that's what we're used to. Either they're low-key romantic comedies, with sex scenes full of low lighting, lingering kisses, and strategically placed sheets, or they're graphic, male-dominated thrillers and action movies. Movies like The Losers and Kingsman feature sex scenes that are violent, crude, and consistently feature female nudity (or, at the very least, women in sexy lingerie). The focus is on showing a woman's body, objectifying it to delight the heterosexual male audience.

Not Fifty Shades Darker, though. This is a rare film aimed at women, not men, crafted to appeal to female sexual desires. Like Magic Mike XXL before it, Fifty Shades Darker throws out the idea that women are there to please men, and replaces it with the notion that men can actually be there to please women — gasp! As a woman, it's exciting to see a movie that finally lets us have the fun.

However, that's not to say that the film doesn't fall victim to the male gaze normalized by Hollywood and inadvertently embraced by male director James Foley (who took over from Grey's female director Sam Taylor-Johnson). The male gaze, a concept proposed by film theorist Laura Mulvey, essentially means that the images we see onscreen are inherently shown through a male lens that often objectifies women or lessens her character in relation to a man. It affects how we see movies and, eventually, how we see ourselves. One of the most obvious consequences of the male gaze in film is the fact that female nudity is normalized while male nudity remains taboo, and, intentional or not, the male gaze is present in Fifty Shades Darker. In almost all of the sex scenes, star Dakota Johnson appears completely nude. There are close ups of her butt, her breasts, her lips, and her legs. Jamie Dornan, however, remains in his jeans in nearly every single one of the sex scenes, with just one blink-and-you-miss-it glimpse of his backside.

The fact that there is no penis shot in Fifty Shades Darker, despite Johnson's nearly full nudity, is likely as a result of the male gaze. "We set up shots not thinking about that and there were a couple of times when it came really close," Foley said in an interview with Cosmopolitan. "But that wasn't on purpose. It was just where the camera was." Foley's statement here is extremely telling. He didn't decide not to show Christian's penis; he just set up the shots as he envisioned it — as a man, using his male gaze.

The male gaze is so persistent that it has normalized the erasure of male nudity, even from a film so bold and female-aimed as Fifty Shades Darker. The movie deserves applause for putting female viewers first in the sex scenes, but also critique for failing to really turn a corner when it comes to male nudity.

Still, while Fifty Shades of Darker doesn't succeed in completely escaping the male gaze, the fact that it caters its sex scenes to appeal specifically to a female audience is a good start, and hopefully, other R-rated films will follow suit.