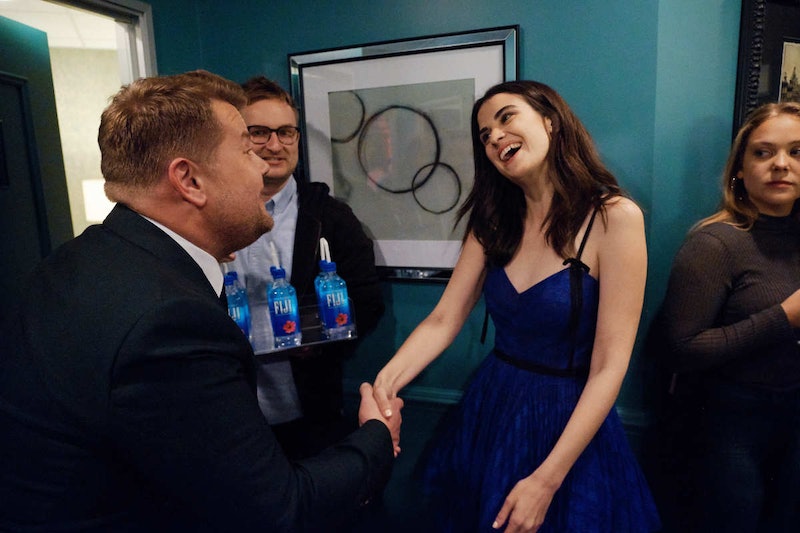 Even if you didn't catch the 2019 Golden Globes' red carpet on Jan. 6, you've still undoubtedly seen pics of a model hilariously photobombing celebs with her tray of Fiji Water. Now, that woman, Kelleth Cuthbert AKA "The Fiji Water Girl," is suing Fiji, as first reported by The Blast on Thursday, Jan. 31. According to court documents obtained the website, Cuthbert (real name Kelly Steinbach) claimed in her lawsuit against both the Fiji Water Company and The Wonderful Company that the brand allegedly capitalized on her viral Golden Globes fame without her permission and “intentionally created cardboard cutouts of Steinbach for use in a cardboard cutout marketing campaign.” (Bustle reached out to Cuthbert's reps for comment, but did not hear back at the time of publication.)

After reports of the lawsuit broke, a Fiji Water rep issued Bustle the following statement:

"This lawsuit is frivolous and entirely without merit. After the Golden Globes social media moment, we negotiated a generous agreement with Ms. Cuthbert that she blatantly violated. We are confident that we will prevail in Court. Throughout our history, we have had a sterling reputation working with talent."

That "generous agreement" seems to be the point of contention between the two parties. Per The Blast's reporting, Fiji allegedly tried to negotiate a contract with Cuthbert's agent on Jan. 8 — although promotional cardboard cutouts with the image and likeness of the model had already begun to appear in grocery stores. (The Blast posted a candid paparazzi photo of singer John Legend leaving West Hollywood's Bristol Farms, and the cutout of the model was displayed in the background.)

Also according to The Blast, the court docs claim Fiji allegedly tried to offer “gifts to entice” the model to sign away her rights and that the company allegedly “pressured [Cuthbert] into video recording a fake signing of a fake document to simulate [Cuthbert] signing on as a Fiji Water Ambassador.”

Cuthbert, who represented Fiji during a Jan. 7 episode of CBS' The Late Late Show with James Corden ("You know you've made it when you're in a photo with the Fiji Water Girl," Corden joked to guest Alec Benjamin), also reportedly claimed in the suit that she has generated an estimated $12 million-plus worth of publicity for Fiji and is asking the brand to immediately stop using the cutouts with her image, in addition to awarding her a monetary compensation for damages.

The situation is reminiscent of comments made by actor Jamie Lee Curtis following the 2019 Golden Globes. As she wrote on Instagram, along with a photo of a grinning Cuthbert lurking behind her:

"So, my husband, who doesn’t look at a lot of show business news sites, just mentioned that I was on the CNN website. I specifically moved away from the blatant promotions by Fiji and Moet where young women with their trays filled with their wares stood near a designated camera. I knew why there was a photographer poised there and I moved away as I said out loud that I didn’t want to be doing advertising for either. Clearly this angle shows that I moved from her being behind me and yet from the side it still happens. The sponsors of events need to get permission from people when they get them to take their picture next to products."

Hopefully Fiji and the viral red carpet model can reach an amicable resolution.

More like this
8 Completely Unserious Tips To Make Your Cuffing Season A Success
By Ginny Hogan
Why TikTok Is Flooded With Controversial Videos About "Pick Me Girls"
By Courtney Young
This TikTok Song About An Unrequited Romance Has FYPs In Shambles
By Emma Carey
On TikTok, Tinned Fish Date Night Is The Latest Viral Food Obsession
By Emma Carey
Get Even More From Bustle — Sign Up For The Newsletter