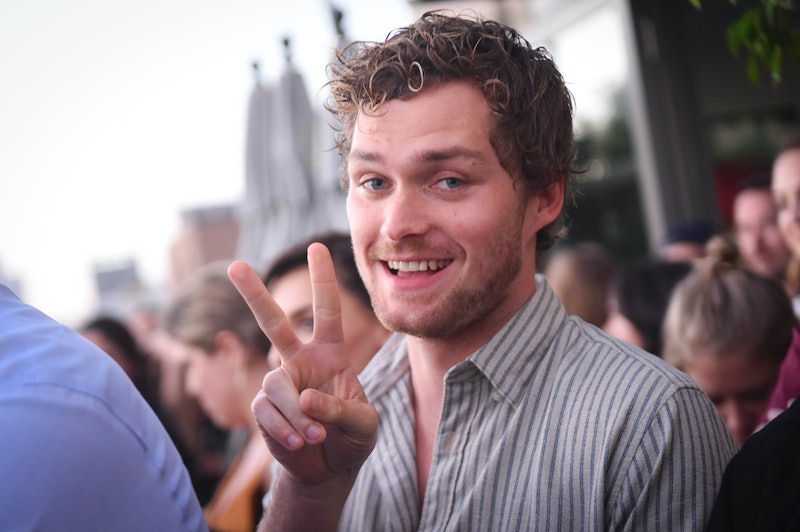 Ser Loras Tyrell might have literally blown up in the series' Season 6 finale, but that won't stop actor Finn Jones from loving Game of Thrones. In fact, as Finn Jones' Game of Thrones finale theory proves, he's still heavily invested in the outcome of the show. During a press tour for the new season of Iron Fist on Netflix, Jones and costar Jessica Henwick sat down with People, and it was just a matter of time before Game of Thrones came up.

"Honestly, I don't care," he playfully said with a wink — likely a nod to the fact that he'd been offed two years prior — and then happily got into the details of how he thinks the show will eventually end. "I basically don't think there will be a throne anymore," the actor explained, adding:

"I don't think there will be a centralized seat of power. I think power will be given back to the original kingdoms. So [there will be] more of like, a democratic rule."

That would be similar to how things were before Aegon the Conqueror "united" the seven kingdoms. It would also be a nod to those who are currently in power within their various locations. However, Jones realized, "that is probably, like, a bit too... utopian for Game of Thrones".

As a result, the actor surmised, "I think what will happen, is everyone will die." Vengeance for Ser Loras, perhaps? Or just a keen insight into the delightful, grim series?

The best part is, the Iron Fist stars might not have even known this was coming. When the interviewer asked if Jones had any insight into the end, Henwick audibly groaned, insisting that the magazine move on. Why? Not out of spite — as in, she wasn't upset to be talking about a different TV show during the interview — but rather, jokey disinterest in hearing about Jones' theories yet again.

"Oh, it's the longest [thing]," Henwick told the interviewer, wincing, "It's very detailed." The thing is, she's not wrong. Once they got Jones going on his Game of Thrones series finale ideas, it became obvious that he'd thought them through before. So, in what context is Jones sharing his theories? Is the actor just out in the world, plotting a satisfying end to Game of Thrones with anyone who will listen? Could it be that he's on the writing staff for the final year? Who knows!

Overall, no matter how you felt about Ser Loras, it's just plain adorable that the actor who played him feels excited about it the end of the series. Especially considering by the time Season 8 of Game of Thrones finally rolls around, he'll have been off of the show for three full calendar years. But hey, as they say in Pyke: What is dead may never die.

Since Jones did not have the opportunity to reveal his vision for a democratic Westeros in full, fans have to hope that some interviewer will ask him for details in the near future. It's also kind of hilarious that even though the actor envisions a peaceful, democratic ending to the show, he knows that it's way more likely to end with some type of apocalypse. That's just the type of nonsense Game of Thrones fans (and stars!) have learned to expect after these many excruciating years.