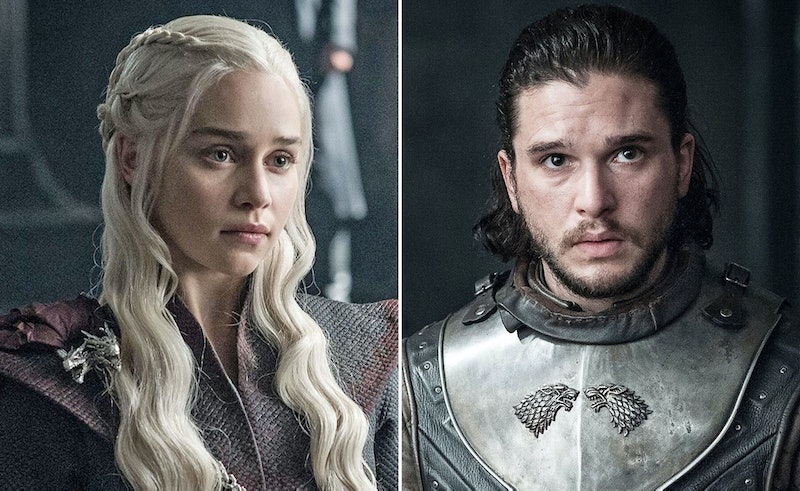 Who doesn't get excited by one of their loved ones having a baby? Expecting the tiny pitter patter of little feet and to see the image of your beloveds recreated. Aw, nice isn't it? OK, but if they were actually related though? Maybe not the greatest news, yet in the messed-up universe of Game Of Thrones, stranger things have actually happened. I mean if flipping Cersei and Jaime Lannister can fire out sprogs a mile a minute, that shows it's possible, right? So, will Daenerys Targaryen and Jon Snow have a baby in Game Of Thrones season 8?

Of course, there is a fan theory for that, and good old Reddit provides as per. It all goes back to the long-held and messed about with "Prince that was promised" prophecy. In case you didn't know, this was a prophecy foreseen by the red priestess Melisandre. According to her prediction, a prince will come forth with his flaming sword (LOL) "lightbringer" and save the worshippers of the Lord of Light. Could the prince that comes forth be the offspring of Daenerys and Jon?

Over on Reddit there are a plethora of bonkers theories but sometimes it's like, OMG have they actually cracked it?

So this theory, which comes from R/gameofthrones is kind of believable. Dare I say the most likely I have read. OK, so they go with the promised prince being the progeny of our pals, Jon and Daenerys. However, they also claim that the prince that was promised, their baby, was actually promised to the Night King. Say what? Yes, the actual worst person to let near your baby, the actual Night King.

"The Prince That Was Promised...was promised to the Night".

Well, according to the theory, the power couple give up their firstborn to save the world from the Night King and his Army of the Undead. As the Reddit user explains, there is pretty much no reason for mankind to win the battle. In fact, it is super unlikely. So Jon and Daenerys have to think outside of the box and offer up their only son:

"There isn’t really a good reason mankind should win this war. They’ve talked about it the whole time about how futile it actually is. So...mankind doesn’t win. Instead, the Night King, on the verge of annihilating the world of the living comes to the surviving heroes and demands his prize: The Prince That Was Promised, a child of royal blood — the true heir to the throne, the prince born to Daenerys Targaryen and Jon — to be the new Night’s King with the passing of the last".

So, Danerys and Jon's baby will be taken by the Night King? Or how will things pan out? Well, this Reddit user seems to have all the answers:

"Dany will have become pregnant in the new season, seemingly defeating the prophecy of Mirri Maz Duur. But the witch will have been proven true in the end. As the Night’s army surrounds the survivors, the Night King will point to Dany’s belly and Jon will (with tremendous gnashing of teeth and brooding), plunge his sword into his true love to pull out mankind’s salvation — the royal baby sacrifice that will Bring Light back to the world, just like when Azor Ahai killed Nissa Nissa to save the world before (and hence never bearing a living child)."

Oh hey Romeo And Juliet vibes. Twisted AF right? Well, nothing shocks with the writers of Game Of Thrones.

What actually happens in Game of Thrones Season 8 is being kept secret until the new series airs next year. However, the star who plays Daenerys, Emilia Clarke, opened up about what viewers can expect in a recent interview with Vanity Fair. She said of her final scenes, "Knowing that is going to be a lasting flavour in someone’s mouth of what Daenerys is," before stopping herself from revealing too much. Could she be referring to the idea of her character giving up her child to the source of all evil? Possibly.

Who actually knows what will happen in Game Of Thrones Season 8? Well, I guess the cast do, but as for the rest of us, all we can do is speculate for now. But oh gosh, I will be crying like a baby if Jon and Daenerys have a baby only to be forced to sacrifice it. Actually, real talk, I will be crying like a baby no matter what happens. Why does this have to be the last series?