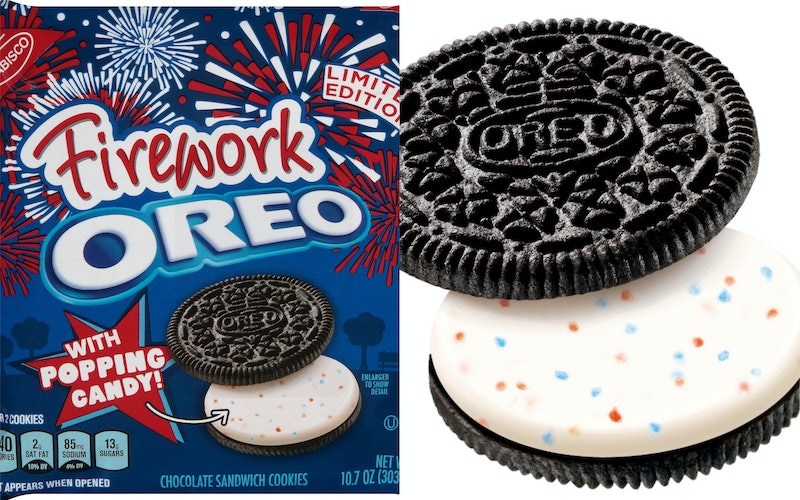 The start of summer is still a couple of months away, but Oreo fans have a chance to get in the mood. As reported by Delish, Firework Oreos are available for purchase at select Walmarts right now. You know, that summertime cookout classic? Hotdogs, hamburgers, potato salad, and those good ol' Firework Oreos?

OK, so maybe they aren't really a summertime staple, but Walmart is ready to bring some Fourth of July spirit to whatever event you have coming up now that warmer weather is here. Memorial Day? Mother's Day? Sitting on your couch watching a Hollywood Medium marathon? All of them pair well with Fireworks Oreos.

Delish reports that Firework Oreos are available at Walmart, so if you're interested be sure to check your nearest location. Walmart currently has them available in store for $2.98 (you can enter your location on the website), and although you can have them "hold" a box for you through the website, they are not available for online order through Walmart at this time.

If you aren't familiar with Firework Oreos, these are one of the more experimental Oreo flavors. The cookie and creme are their usual taste, but the creme is studded with popping candy. (Like, Pop Rocks, not specifically from that brand.) You see, the Oreos don't taste like a firework (like... burning?), but they feel like a firework. Also, they do taste like an Oreo mixed with Pop Rocks.

Firework Oreos were first released in May 2017. At that time, Food & Wine reported that testers described them as "Utterly delightful," "Like Oreo roulette. Mine didn’t start popping until two bites in, but kept on going five minutes after," and "No... no." Basically, if you like Oreos and think Pop Rocks are fun, you might like these. If you don't like Pop Rocks and find the feeling they make in your mouth really disturbing, getting that feeling via chewing an Oreo probably isn't for you. After the 2017 debut, Firework Oreos were brought back again in 2018, and the return was announced along with other flavors that rolled out over the year, including a Peeps-flavored Oreo for Easter.

Firework Oreos aren't the only innovative flavor Oreo has come up with in recent past. S'mores Oreos returned to shelves in April after a three-year hiatus. They have graham cracker-flavored cookies with chocolate and marshmallow-flavored creme filling. There are also Game of Thrones Oreos currently available in honor of the show's final season, which premiered on April 14. These ones are the regular Oreo flavor combination, but the design on the cookies is changed. There's a lion for the Lannisters, a dragon for the Targaryens, a direwolf for the Starks, and the Night King for the White Walkers.

There are usually rumors about new or returning Oreos hitting shelves, so if none of these special ones speak to you, something made for you could be on the way. That, or you could try one of the many, many other flavors that are already out there. Birthday Cake, perhaps?

CORRECTION: A previous version of this article misstated the availability of Fireworks Oreos. The Fireworks Oreos are available to purchase at select Walmarts.