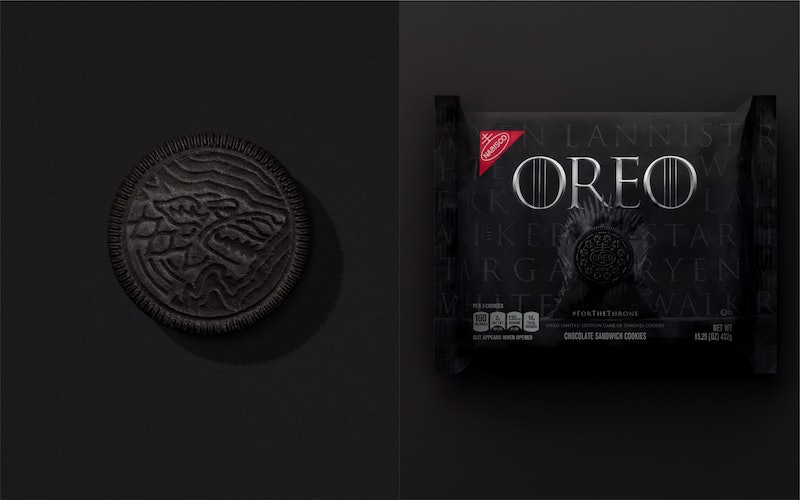 In the Game of Thrones, you win or you die — or maybe you get cookies. Honestly, the cookies seem like the best outcome, so it’s with great joy that I announce to you the official arrival of the Game Of Thrones Oreo collaboration ahead of the show's Season 8 premiere. Although we’ve known about the collaboration for some time, what’s new today is the date on which we’ll finally be able to enjoy them, and a sneak peek at what they actually look like. You’re in for a treat, denizens of Westeros — literally and figuratively.

News that GoT-themed Oreos were on the way dropped at the end of February, thanks to a pair of posts from both the official Oreo Instagram page and snack food Instagrammer Candy Hunting. Oreo’s own post simply teased the fact that the Oreos were coming in a short video and the caption “Cookies are coming,” while Candy Hunting’s featured an image of what the packaging is expected to look like. Candy Hunting also included a bit of additional information in the post’s caption, writing, “In a partnership nobody saw coming, new Game of Thrones Oreos will be out sometime before the debut of the final season on April 14. … And to preemptively answer some questions: Yes, these are legit. The image is from a very reputable source. No, these are [not] just normal Oreos in a redesigned package. No, these are not exclusive to a particular store.”

And now that Oreo has officially released images of the cookies themselves, which are set to drop in stores on April 8, we can confirm that, indeed, these are not just normal Oreos in a redesigned package. In fact, we’re not even limited to just one design — there are four distinct Oreo designs in each package. Three of them feature the sigils of the three Great Houses currently vying for the Iron Throne. The House Stark Oreo depicts the direwolf sigil:

For the Lannisters, it’s the mighty lion:

And for the Targaryens, it’s the three-headed dragon:

The fourth Oreo, meanwhile, is devoted to the common enemy threatening all of Westeros — the White Walkers, represented by the Night King’s chilly mug:

Even the packaging is pretty epic; previously seen in a blurry, somewhat pixelated form on Candy Hunting’s Instagram, it’s now bright and clear, with loads of impressive details. The bag itself is dark, with the names of the Great Houses written across the background in the now-infamous Game of Thrones font; meanwhile, in the foreground, a lone, triumphant Oreo sits on the Iron Throne.

It’s absurd, and I love it.

Game Of Thrones and HBO have really been pulling out all the stops in order to promote the show’s final season; under the general banner of the #ForTheThrone hashtag, product collabs such as the Oreos, the “For The Throne” beer from Ommengang Brewery, and the Urban Decay x Game Of Thrones collection have all been recently announced, while the official For The Throne website has encouraged fans to donate blood to the Red Cross, to create fan art based on a collection of props from the show, and to go in search of the Iron Throne — literally — in a massive scavenger hunt. (Two life-sized thrones have been hidden in the real world; one has already been found. Its finders were awarded an actual crown. Well done, lads. Well done, indeed.)

But if you don’t want to, uh, cross the globe in search of an actual Iron Throne, you can still get your participation on by pledging your loyalty to one of the four factions represented by the Game Of Thrones Oreos. Visit Oreo’s website, Facebook page, and/or Twitter account and use the hashtags #GameofCookies and #ForTheThrone to do so. Throughout the run of Season 8, Oreo might just surprise you with a treat for participating.

The Game Of Thrones Oreos will be available for a limited time nationwide starting on April 8. Season 8 of the show itself debuts on HBO on April 14. Are you ready for the final clash?

More like this
Here’s What Sarah Jessica Parker’s Canned Cosmo *Actually* Tastes Like
By Emma Garza
TikTok's Favorite Bartender Thinks Mimosas & Bloody Marys Are Out For Brunch
By Alexis Morillo
TikTok Is Using A Kendrick Lamar Song To Post Thirst Traps
By Courtney Young
What Does “Gatekeeping” Mean On TikTok? The Viral Term, Explained.
By Courtney Young
Get Even More From Bustle — Sign Up For The Newsletter