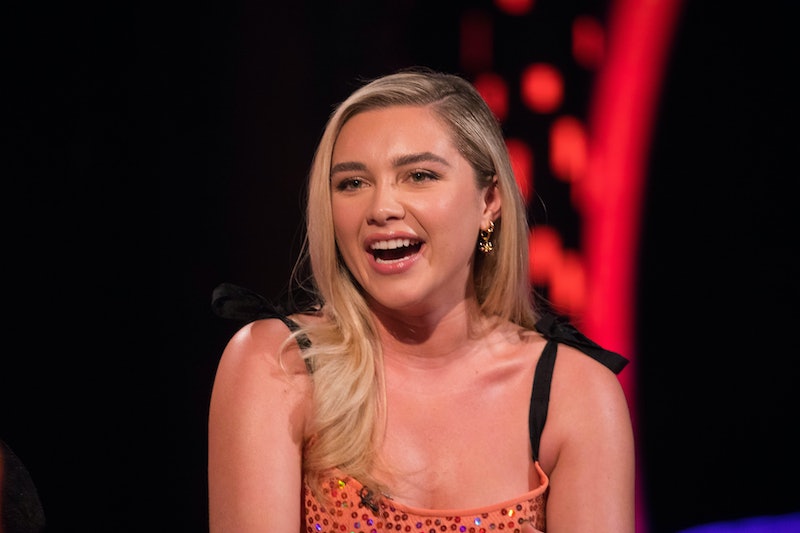 For anyone looking for quarantine workout inspiration, this viral challenge creates a new meaning for "contact sport." On Friday, stuntwoman Zoë Bell created the "Boss B*tch Fight Challenge," recruiting plenty of celebrities, including Florence Pugh and Margot Robbie, to participate in virtual fight — in compliance with social-distancing measures, of course. During the video, each participant pretends to take a hit from the actor or stunt person who went before, and then returns the punch in an increasingly spectacular fashion.

Many familiar faces appear in the epic video, including A-List actors like Drew Barrymore, Cameron Diaz, Rosario Dawson, Kaitlin Olson, Florence Pugh, Scarlett Johansson, Halle Berry, Margot Robbie, and more. The video even features fun nods to Bell's onscreen stunt work, with Daryl Hannah poking fun at her Kill Bill role and Lucy Lawless offering a reprisal of her role in Xena: Warrior Princess. KT Tunstall, whose song "The Healer" is featured in the video, also makes an unexpected cameo at the end.

On Friday, Bell posted the video on YouTube, writing, "Kicking lockdown boredom with some of the coolest! Ladies, you are all my hero’s [sic]." The stunt coordinator's video concept was likely inspired by a similar viral video French stuntmen shared on Twitter in April, which was captioned, "Quarantined stuntmen, bruh..." Of course, Bell managed to recruit plenty of Hollywood friends who were bored at home for her own version, and it seems likely the video will continue the viral trend.

The stars featured in Bell's 5-minute punch-a-thon brought both fun shenanigans and serious stunts to the screen, with Dawson kicking the camera down, Pugh deliberating smashing a champagne bottle, and Robbie tackling her opponent with a baseball bat, a reference to her Birds of Prey character Harley Quinn. Many of Bell's fellow stuntwomen, such as Tara Macken and Renae Moneymaker also appeared in the clip, staging epic tumbles down the stairs and running jump kicks.

Many of the participants shared the video on social media as well, On Instagram, Diaz posted the viral challenge, writing "So much fun to participate in @therealzoebell's #BossB*tchFightChallenge. Fun way to fight boredom with some bad*ss babes!" Berry reshared the stunt-filled video on Instagram as well, captioning it, "So proud to spar with these bad ass action women of quarantine."

Bell exclaimed at the end of her video, "I love this game — who wants to play next week?" If any of fan-favorite action stars didn't make into the video this time around, there's a chance their cameo might just show up in next week's edition.

More like this
Austin Butler Recalls Lisa Marie Presley Showing Him Elvis’ Bedroom
By Jake Viswanath
You’ll Definitely Recognise Isadóra Bjarkardóttir Barney’s Mum
By Maxine Harrison
Lisa Marie Presley's Secret Granddaughter Was Revealed At Her Funeral Out Of Nowhere
By Jake Viswanath
Jennifer Coolidge Recites “Jenny From The Block” Beside J.Lo In Her First TikTok
By Jake Viswanath
Get Even More From Bustle — Sign Up For The Newsletter
From hair trends to relationship advice, our daily newsletter has everything you need to sound like a person who’s on TikTok, even if you aren’t.