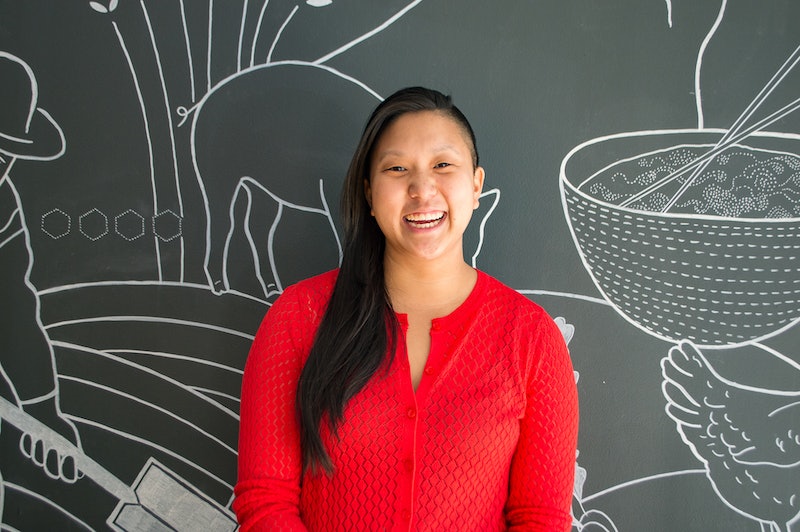 When Irene Li opened her Boston-based Mei Mei food truck with her brother and sister in 2012, it didn't take long for her to start exploring the intersection of her passions for foods and advocacy. Early on, she had an interest in sourcing sustainable, pasture-raised meats for the business, and soon learned that Mei Mei would be able to more easily afford meat that had been raised humanely if it was purchased in larger quantities. "I was just really curious about how far we could go, how far we could set our standards," she tells Bustle.

With the help of Mei Mei's co-chef — and a lot of searching online — Li taught herself how to properly (and more affordably) source products in an ethical, farm-to-table manner. This foray into the nitty gritty of meat was one early example of the chef's envelope-pushing approach to the restaurant industry.

Li, now 27, continues to experiment with new techniques to bring greater transparency and sustainability to the family business. Five years after opening their Boston food truck, Li and her siblings now also operate a brick and mortar location on the Boston University campus, as well as a shipping container equipped with a full kitchen to serve up Mei Mei's unique Chinese-American menu.

In that time, Li has also become a vocal supporter of local farms and distributors, connecting them with restaurants in Boston and New York to create a mutually beneficial system in which higher-quality products can be more easily accessed. A self-professed "infrastructure nerd," she's expanded the agriculture network she started in her days at Cornell University to help build relationships among New England farms and family businesses, allowing them to be more effective, sustainable, and efficient.

"It's a lot of small fish working together in a big pond," Li says. "I try to get people really excited about thinking about the families and the people who are involved in creating their food."

Within the walls of the restaurant itself (Mei Mei's menu is full of interesting twists on more traditional Asian-American fare, like pierogi dumplings and kimchi fried rice), Li is also working to build more ethical, transparent infrastructure — more specifically, with her employees. Thanks to a grant from the state of Massachusetts, the Mei Mei staff is now part of an open book, profit-sharing program. For 36 weeks, team members will attend financial management classes, upon completion of which they'll be eligible for a quarterly payout of the restaurant's profits. Participants will be paid out based on the number of hours they work, which means that a full-time dishwasher stands to earn just as much as a full-time manager.

Li calls the open book program her current "pride and joy," largely because it comes full circle on social justice issues she worked on as a college student. Before her love of food took center stage, Li was most interested in activism and advocacy. It was only when she began to burn out from said activism that she turned to cooking more frequently. She perfected her skills as a home chef, then signed on to work as a line cook for her friend's hole-in-the-wall Mexican restaurant, where she learned the basics of local sourcing and sustainable food.

"As soon as I realized that [my friend] was putting all of this time and effort into sourcing and sustainability, it was very clear that's not what all restaurants do," Li says. "We could all do so much better."

To this day, as Li continues to fight for best practices in the Mei Mei business and to pursue the family's goal of becoming an increasingly major fixture in the regional food system, she's still driven by high-quality ingredients and the magic of fresh food. "Going to the farmer's market is kind of how I imagine people feel when they go to church," Li says. "It's kind of a spiritual and communal experience. I fell in love with that community and cooking as a way of being part of it."