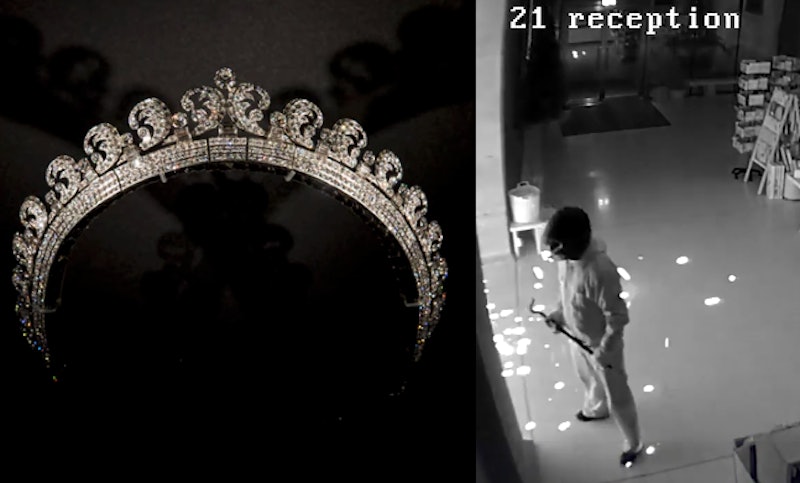 Four people have been arrested for allegedly stealing the Portland Tiara out of its Portland Collection Gallery display case in Nottinghamshire, England — and there is actual surveillance video of the heist. The tiara itself has reportedly not been recovered, and police are still looking for more potential suspects. Along with the tiara, a diamond brooch made from stones removed when the tiara was remodeled was also stolen. It has also not been recovered.

According to ITV, three men — ages 33, 38 and 46 — and one 30-year-old woman were arrested on Dec. 7 in conjunction with the elaborate tiara heist. And once you see the video of their alleged crime, you'll be seriously invested in the real life action movie taking place in the UK right now.

The stolen Cartier tiara, belonging to the UK royal family, is a 20th-century piece created specifically for Winifred, Duchess of Portland to wear to the 1902 coronation of King Edward VII. King Edward was Queen Elizabeth's great-grandfather and Queen Victoria's son. You can even spot the tiara in historic paintings depicting the event, which was one of the most notable coronations in royal history given that a coronation hadn't happened in some 53 years prior.

The tiara was created around the flawless Portland Diamond, which is bordered by diamond drops and pendant diamonds, creating looping circles around the crown of the head.

On Nov. 20, burglars used power tools to smash an armored glass case in the gallery between 9:45 p.m. to 10 p.m., stealing the diamond-encrusted tiara and matching brooch while alarms sounded.

“We believe the burglars used specialist diamond cutter-type tools to break through the armored glass display case," Gayle Hart, detective inspector for the Nottinghamshire Police, said in a press release.

According to police, the burglars wore white suits and motorcycle helmets during the heist, using a small silver car they then burned to execute the high stakes operation. Law enforcement narrowly missed apprehending the thieves by mere minutes.

"Security services missed the thieves by 90 seconds, and the police arrived on the scene two minutes later," a spokesperson for the Welbeck Estate told the BBC.

Video of the heist was posted by Nottinghamshire Police on social media just one day before the alleged burglars were apprehended by police. It's unclear if the 30-second video, which shows the thieves wielding crow bars and sending sparks flying, lead to the arrest of the alleged perpetrators.

According to a expert who spoke to the BBC around the heist, it is feared the historic tiara was broken apart with the diamonds sold separately. According to the expert, selling the iconic tiara intact would be almost impossible without suspicion.

"The most horrendous thought is it could be something called a 'breaker', where the diamonds are taken out and sold individually," auction expert James Lewis told BBC.

As sad as it is to potentially lose a part of royal history, you have to admit this IRL heist talk is pretty thrilling.