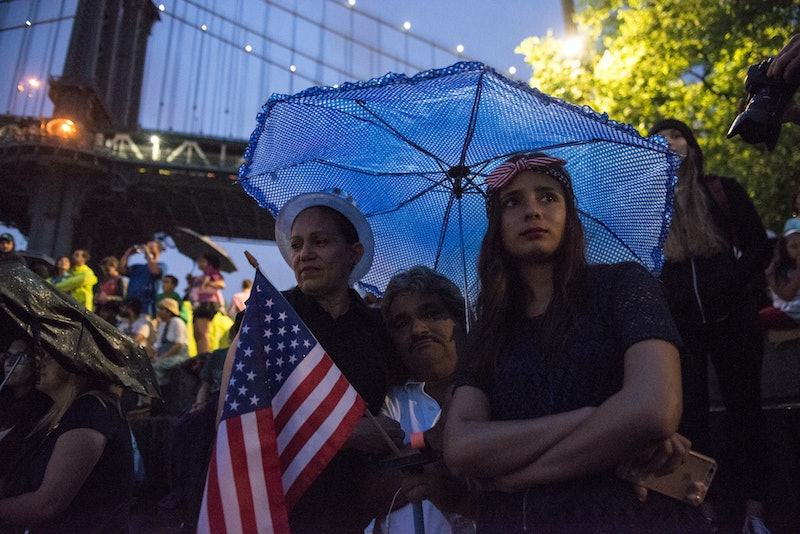 While some of us tend to think of the Fourth of July as a day for celebrating all-beef franks, sparklers, ice cream cones, and patriotic tunes, it's also the perfect opportunity to express patriotism by exercising one's right to peaceably assemble. If you were inspired by the coast-to-coast demonstrations of the Women’s March, if you held up a sign in the name of Mother Earth at the People’s Climate March, or if you showed up in support of the Science March earlier this year, you might be interested to hear that there’s a groundswell of Fourth of July Protests and Marches across the country, and plenty of ways to make your voice heard on Independence Day.

Independence Day has always been one of my favorite holidays. I’m a sucker for nostalgia, and the Fourth of July always takes me back to when I was a sweaty, summer-loving kid with a sparkler in one hand and an ice cream sandwich in the other. As a child, the Fourth of July felt so wholesome. Today, with things like a woman’s right to reproductive freedom, quality public education for all citizens, and affordable access to healthcare up in the air, I can't say I feel the same excitement about the holiday that I once did.

As much as the Fourth of the July tugs at my heartstrings, it’s sometimes easy to forget what I’m really celebrating: my freedom. And at a time in history when so many U.S. citizens are being deprived of their basic rights and freedoms as Americans (naturalized or otherwise), the need to speak up in support of the liberties we so often take for granted couldn’t be more dire. This year, consider swapping the lawn games and picnic food for something a little more substantial, and show up in support of these civic liberties.

Americans interested in rallying behind the protection of every U.S. citizen’s right to sexual and gender identity freedom can join in the Rise Up 5k, a walk-run demonstration in 300 cities strong happening Jul. 1. As the world’s largest running-walking event, The Rise Up 5k promises to attract the attention of the press and policymakers. Event organizers encourage everyone, runners or not, LGBTQIA+ or otherwise, regardless of ethnicity, politics, religion, or sexual orientation, to rise up and “run to the cadence of liberty, freedom, and justice for ALL.” And if you can’t make it to a local event, you can still join the movement by participating in the Rise Up Virtual Run.

Citizens across the country are calling for the impeachment of Donald Trump, and they’re taking to the streets on Sun., Jul. 2 to get their point across. According to Impeachment March event organizers, “Donald J. Trump has been in blatant violation of the Constitution from the day he was sworn into the office of president … It is time that congressional representatives do their job and start the process to impeach this president.” Other organizers encourage citizens feeling tired of waiting around to take action, saying, “Tired of feeling like you’re watching a race to see which happens first – impeachment or World War III? Take part in this nationwide coordinated demonstration to call for the impeachment of President Donald Trump – ASAP! “If you share their sentiments, join the flagship march in New York City, or find the local march happening in your community on Jul. 2.

3. The March For Real News

A demonstration happening around the U.S., the March for Real News is an effort organized by a group of independent journalists calling for "Real News" happening Jul. 2. According to organizers, the march is “a call to critically examine the media's role in our democracy, a call to demand FACTS rather than fake, corporate-purchased news, and a call for the renewed integrity from the journalistic community that will put the power of information back into the hands of the people, not the corporations.” Protesters interested in demanding facts should make plans to attend marches in Washington, Boston, Denver, or in other major U.S. markets.

Individuals feeling particularly disillusioned with the notion of patriotism this Fourth of July might find solace in the Fire Trump Walk, a public demonstration happening outside Trump Tower on Friday, Jul. 4 in Manhattan. The event encourages families to “walk together to Trump Tower carrying signs asking Trump to resign." The march begins at 11:00 a.m ET.

5. The Lawyers March On Washington

The Lawyers March — which organizers insist is not just for lawyers — aims to protest sustained assaults on the U.S. constitution by the Government. Organizers describe the event as “a peaceful march of lawyers, law students, judges, and all people concerned about any assaults on the United States Constitution, and desirous of upholding our laws. Any and all people are welcome, but lawyers and law students are especially encouraged to come out and make our collective voices heard.” Individuals interested in lending their voices to the cause can join up in Washington on Jul. 2 at noon.

More like this
Your Daily Horoscope For August 10, 2022
By Mecca Woods
Samsung Just Dropped 2 New Foldable Smartphones
By Michelle Toglia
TikTok Is In Its Elle Woods Era
By Meguire Hennes
13 Selfie Instagram Caption Ideas That Exude Main Character Energy
By Jessica Booth and Emma Carey
Get Even More From Bustle — Sign Up For The Newsletter