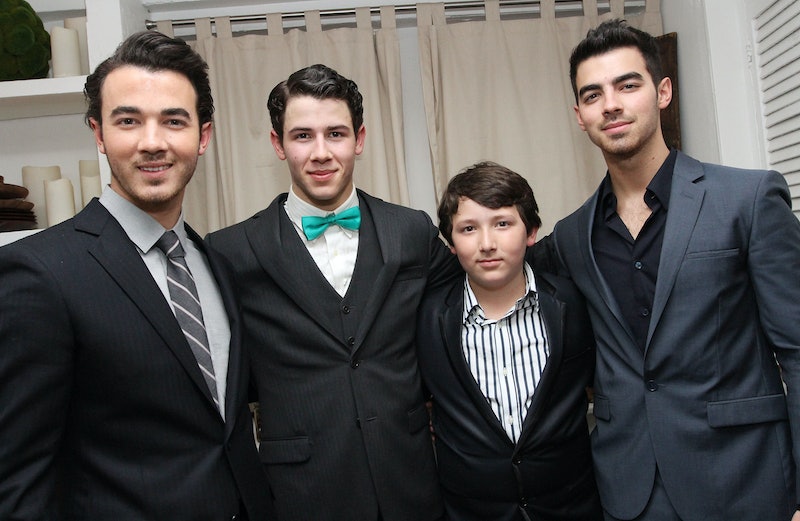 The Jonas brothers have reunited, and their number-one fan couldn't be more thrilled. And no, that's not a reference to the countless people who had JoBros posters on their wall growing up. Frankie Jonas reacted to the new Jonas brothers song, calling himself the trio's "biggest fan" in a new Instagram post that's equal parts funny and sweet.

Frankie's latest Instagram video shows him dancing to the Jonas Brothers' new song, "Sucker." The moves are totally silly, but his caption shows just how much he looks up to his three big brothers. Frankie wrote,

"The boys are back in town. We rest easy tonight knowing that the earthly balance is restored. So proud of y'all. I've been a JB Stan since I was born. No one can take my biggest fan tittle."

His comment about being a "JB Stan" is pretty funny, since he was pretty much born into loving his brothers' band, like it or not. Frankie appeared alongside his siblings on the Jonas TV series. The age difference between him and his elder brothers led fans to dub him the "Bonus Jonas." But at age 18 — he celebrated his birthday in September — Frankie Jonas is all grown up. And he's definitely not the band members' kid brother anymore.

Since the Jonas TV show ended in 2010, Frankie seems to have continued to pursue music and acting. Frankie appeared in two episodes of R.L. Stine's The Haunting Hour, and he was also a voice actor in The Reef 2: High Tide and Spooky Buddies. His most recent acting credit is 2013's Gutsy Frog, in which he played Frankie (the character name was just a coincidence).

Based on Frankie's Instagram, though, it looks like he's more focused on music than he is on acting. Frankie has posted photos of guitars, pictures of him playing guitar, and messages of support for artists he's worked with. And as People pointed out, Frankie has also performed with Noah Cyrus, although that was almost a decade ago, when they worked together on the movie Ponyo.

More recently, he also had a special role in his brothers' lives. Frankie was a groomsman in Nick's wedding, and it looks like he had a great time at the celebration, based on the photos he shared.

As for the new video, it looks like Frankie's siblings got a kick out of his dancing to "Sucker." Joe shared the video on Twitter, writing,

"The legend that is @FrankieJonas reminding everyone he kicks major major 🍑"

Some fans responded to Joe's tweet with questions about why Frankie wasn't in the "Sucker" video. "Always thought that if you guys come back @FrankieJonas would be part of it. But he is still part as the greatest fan," tweeted one fan. "I think this should have been your official music video," wrote another. Frankie may not have been in the actual video, but it looks like he had some fun making a clip of his own.

"Sucker" only came out at midnight on Friday, but fans are already loving the new music. And, apparently, there's no bigger fan than the trio's younger brother.