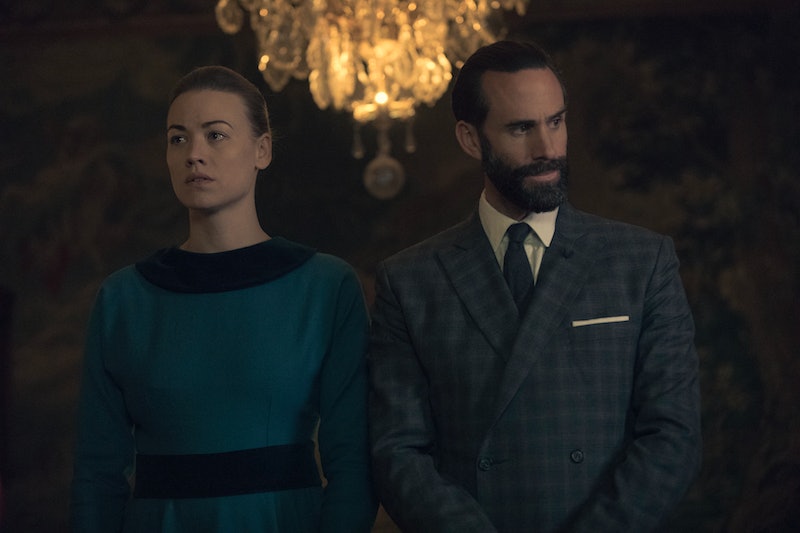 The Waterfords go into the New England countryside to meet with Mark Tuello, the American government official who keeps trying to offer Serena asylum in Hawaii and a tell-all book deal, in another attempt to negotiate for baby Nicole. It looks like she might finally be taking him up on that offer, though. Tuello led them into the woods for their meeting... so far that they actually crossed the border into Canada. When Fred steps out of the car, he is ambushed by American soldiers and read his charges, which include but are not limited to: violating human rights, kidnapping, rape, torture, and slavery. It's always cathartic to hear those horrors labeled for what they are and not normalized if not romanticized by those still in Gilead.

Serena has been increasingly difficult to read this season, but this appears to have been part of her plan all along. She did tell Fred that Tuello would need something in exchange for reuniting her and Nicole. She just didn't tell her husband that she was exchanging him in this negotiation. Serena doesn't just want out of the oppressive world she helped create. She doesn't just want to destroy what she created for herself and other women in Gilead. She wants Nicole, who she keeps insisting is her daughter, so her struggle is far from over.

It's difficult to determine exactly how much this will damage Gilead. Fred was important locally, but maybe less so nationally. The impact of his arrest may depend on what information he (and Serena) expose about the dystopian society. It should be enough for the United Nations to intervene and send peacekeeping troops into Gilead, right?! In Margaret Atwood's novel, it is implied that Gilead lasted multiple decades before it fell and the United States regained sovereignty. If this is in fact the beginning of the end on the Hulu series, it will be a departure from the source material.

This wasn't the only blow to Gilead's The other one was a little more literal. June killed Commander Winslow and a Marthas at Jezebel's covered it up for her because June is the one who saved her from the Colonies after Commander Lawrence's ethics experiment that may have secretly been a favor.

June also may have arranged for a plane to take the Lawrences and 52 children out of Gilead. At the end of the episode, Lawrence hands June a gun for her own protection. "They'll be coming for us," he says. If they survive this week's developments, they could be on track to do even more damage. It really was quite the Handmaid's Tale episode, and there still are two more to go before the end of the season.

More like this
Here's What Jeffrey Dahmer's Dad Has Said About His Other Son, David
By Grace Wehniainen
'Reservation Dogs' Season 3 May Finally Mend Bear & Willie Jack’s Relationship
By Gretchen Smail
Glenda Cleveland Died 2 Decades After Trying To Turn In Neighbor Jeffrey Dahmer
By Brad Witter
'Grey's Anatomy's New Intern Got Advice From Dr. Bailey Herself
By Grace Wehniainen
Get Even More From Bustle — Sign Up For The Newsletter