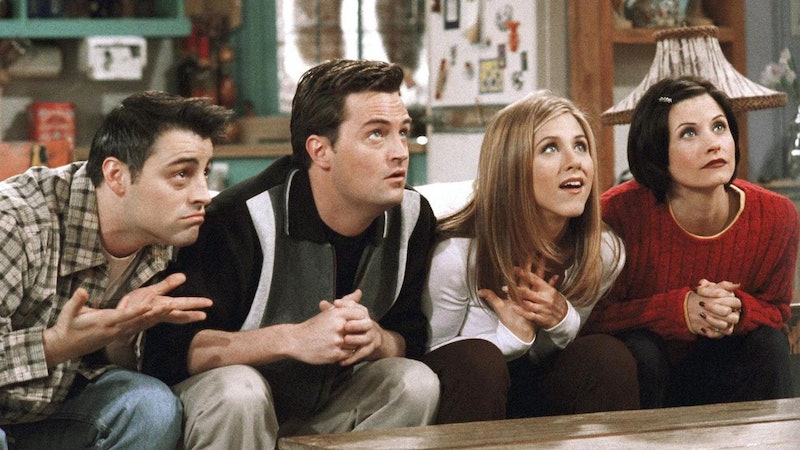 Rachel, Ross, Monica, Chandler, Phoebe, and Joey will be there for you, until well, they aren't anymore. Unfortunately, The One Where Friends Leaves Netflix could be coming, according to TVLine. But, while the must-see NBC classic might soon be gone from this particular streaming service, luckily, the good news is it won't be gone from streaming forever.

At the Television Critics Association winter press tour on Monday, Feb. 11, a potential Friends bombshell was dropped thanks to WarnerMedia Chief Creative Officer Kevin Reilly. While promoting WarnerMedia's new streaming network Reilly said that fans "can expect the crown jewels of Warner will ultimately end up on the new service.” Some of Warner Bros. most priceless gems include Big Bang Theory and Friends, which TVLine pointed out were used in the promotional materials for the network.

Now of course WarnerMedia's streaming service would want the studio's most famous shows. And it's really not all that weird that they'd want to be the only place that fans can see them, which puts into question Netflix's access to Friends. Reilly didn't definitively say whether Friends is leaving Netflix, but let's just say, it doesn't look good. “Sharing destination assets is not a good model," Reilly said. "My belief is they should be exclusive to the service.”

The WarnerMedia streaming service, which does not have a name as of yet, is set to debut later this year. There's also no word on how much the service will cost, though, some may think having unlimited access to Friends is priceless.

The new streaming service is also looking to offer access to CW shows such as The Flash, Arrow, and Riverdale, which are currently available on Netflix. CW's streaming deal with Netflix expires this summer, and at the TCA panel Reilly confirmed that “we’re very interested in putting that on our platform." So, yes, this could mean these shows will also be leaving your queue in the coming months for the WarnerMedia streaming service.

But, this new service isn't just planning on stealing all your faves from Netflix. WarnerMedia's streaming service plans to offer "access to HBO programming and the Warner Bros. library of theatrical films," according to TVLine. Which means any Warner Bros. films currently available on Netflix could vanish by the end of the year. The new site will also feature original programming, but those projects won't premiere until 2020.

For those who are wondering if this Friends streaming situation could be anymore confusing, perhaps it's worth looking back at that last time Friends almost left Netflix in the U.S. It wasn't all that long ago, just this past December, that fans were put on high alert that the show could be leaving Netflix, its streaming home since 2015.

Luckily, Netflix, with a little help from the Holiday Armadillo, gave every fan an early Christmas present with the announcement that Netflix will continue to stream Friends "throughout 2019." At the time, Ted Sarandos, Netflix's chief content officer, said the show's "departure is a rumor," but didn't offer any solace about Friends sticking around for longer than the year.

Maybe Netflix will be able to swoop in with a check to keep Friends, or maybe a lot of people are going to start subscribing to this new streaming service to get their fix. Maybe like Ross, though, we can hope that Netflix and Friends are just on a break.

More like this
Netflix Reveals First Look At Wednesday In The 'Addams Family' Spinoff Series
By Bustle Editors
A New 'And Just Like That' Table Read Pic Confirms A Key Character's Return
By Jack Irvin and Grace Wehniainen
Nicola Coughlan Shared A Lady Whistledown Excerpt From ‘Bridgerton’ Season 3
By Grace Wehniainen, Alyssa Lapid and Sam Ramsden
24 Years Ago, 'Friends' Dropped Its Most Underrated Ross & Rachel Episode
By Grace Wehniainen
Get Even More From Bustle — Sign Up For The Newsletter