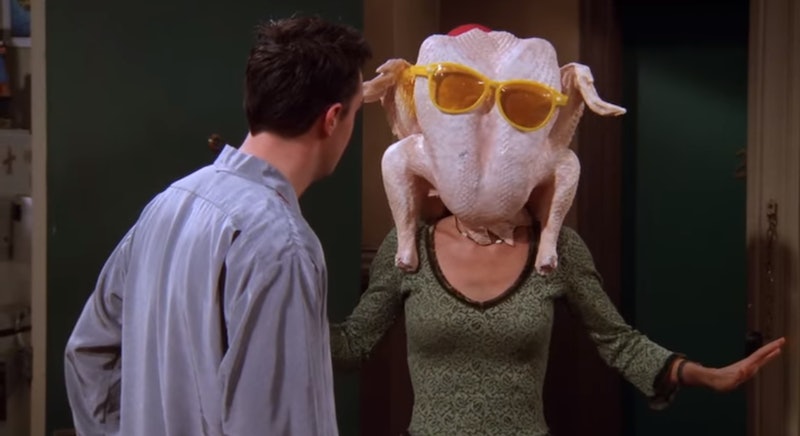 Friendsgiving is coming to a theater near you this November. In celebration of the show's 25th anniversary, eight Friends' Thanksgiving episodes will be shown in theaters across two days on Nov. 24 at 7 p.m. and Nov. 25 at 4 p.m. and 7 p.m. Fathom Events, which previously brought episodes to theaters in September, is behind the special Thanksgiving showings.

Over the course of 10 seasons, Friends served up a cornucopia of iconic Thanksgiving episodes. From the one where Chandler spends the holiday in a box to the one where Monica wears a turkey on her head, the show's Thanksgiving-themed outings are among its most famous. And for good reason; Ross, Rachel, and the rest of the gang helped popularize the idea of having a special Thanksgiving with your pals.

Fathom Events reported that the three-night Friends 25th: The One With The Anniversary celebration grossed an estimated $2.9M and attracted more than 230,000 fans to theaters nationwide. "Fans showed up in full force for our initial Friends screenings, so we know there is demand for more," said Fathom Events CEO Ray Nutt per the official press release. "We're excited to put eight classic episodes on the big screen for fans to celebrate with their friends, just in time for Thanksgiving."

Warner Bros. TV has been going all out for Friends' 25th anniversary this year. In addition to two separate theatrical events, there's also a Friends pop-up coming to Boston in November, the Central Perk couch has been touring the world, and Pottery Barn released a collection inspired by the show. Ross, Rachel, Joey, Chandler, Monica, and Phoebe haven't been on NBC since the series finale in 2004, but the bevvy of Friends celebrations in 2019 have proven that the Central Perk gang is still beloved by fans.