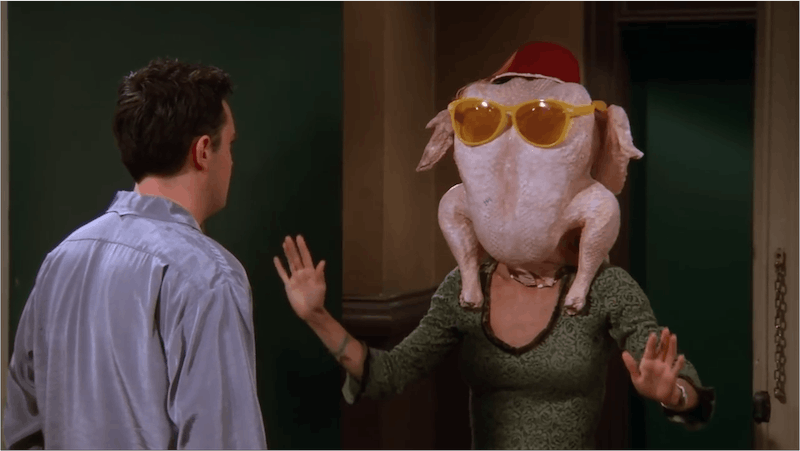 One of the great joys of adulthood is making your own new holiday traditions — and Pottery Barn’s new round of Friends merch is here to help you right along. The expansion of Pottery Barn's existing Friends line arrived at Pottery Barn’s website on Oct. 30 — and a number of the items within it are perfect for decking the halls. Because nothing says “Happy holidays!” like jamming a turkey on your head for the sole purpose of freaking out your best friend, am I right?

Pottery Barn’s Friends collection debuted in July of 2019 in honor of the show’s 25th anniversary. (The very first episode originally aired on Sept. 22, 1994.) Featuring a selection of décor and other home goods, as well as the infamous Apothecary table, the collection allowed longtime Friends fans to enjoy their morning coffee in a Central Perk mug, welcome visitors to their homes with a punny doormat, and adorn their couches with a purple throw pillow designed to look like the front door to Monica’s apartment.

“Friends is one of the most beloved sitcoms of all time, and we are excited to celebrate the show’s 25th anniversary with this spirited Friends-inspired collection for the home,” said Pottery Barn president Marta Benson in a press release at the time of the collection’s arrival. “The Pottery Barn assortment is a nod to the enduring popularity of the show, its cast of characters and nostalgic references, and it gives Friends fans yet another way to enjoy, relive and share their favorite moments.”

And now, as of Oct. 30, a whole bunch of new items have joined the line — including several perfectly timed for the holiday season. You can now get yourself, for example, a mug emblazoned with the iconic fez-wearing, bespectacled turkey head — an image which first made its way in front of our eyeballs in the fifth season episode “The One With All The Thanksgivings,” which aired on Nov. 19, 1998. Or, if Thanksgiving isn’t really your thing, why not spring for something adorned with Ross’ Holiday Armadillo? Santa’s Tex-Mex friend made its debut during the seventh season episode appropriately titled “The One With The Holiday Armadillo,” which aired on Dec. 14, 2000 — and although it may never have achieved quite the same level of fame as the turkey head, it’s still a much-beloved classic. And now you can hang it on your wall, because why not?

Not all of the new offerings are holiday-related, though; a number of the new prints and mugs available now pay tribute to other fan-favorite moments from the show, including lyrics from the iconic “Smelly Cat” song and the infamous “They don’t know that we know they know we know” line. (In case you need a refresher, “Smelly Cat” made its initial debut in the second season episode “The One With The Baby On The Bus,” which originally aired on Nov. 2, 1995; it then made subsequent appearances throughout the remainder of the show’s run. Meanwhile, the “They don’t know…” line appeared in “The One Where Everybody Finds Out,” which originally aired on Feb. 11, 1999 during the fifth season.)

You can even frame your front door’s peephole just like Monica did now; a recreation of the gold frame Monica hung on the inside of her front door has been added to the collection, as well. The peephole itself obviously isn’t included; you’ll also have to paint your door purple if you want to get the full Monica look. But, I mean, hey, you can always paint back over it if you get sick of the color, right?

I should probably also note here that the Apothecary table is on sale right now. It’s still not cheap — it’s $824 for a limited time as of this writing, down from its regular price of $1,099 — but, I mean, that’s still $275 less than usual, so, hey, if you have the disposable income on hand, go for it. Just, y’know, maybe don’t try to convince your roommate that it’s a flea market find; that… usually doesn’t end well.

Check out the full Pottery Barn X Friends collection here. I can’t guarantee it’ll always be there for you, but at least we’ll always have our memories.

More like this
23 Super Sweet Things To Write In A Valentine's Day Card
By Karen Belz and Lexi Inks
Ashamed Of Your Screen Time Stats? Here's How To Change That
By Alexis Morillo
Learning To Love, Not Judge, The Lunchbox Wives Of TikTok
By Esther Zuckerman
I Spent 2 Years Trying TikTok’s Dating Advice
By Kailynn Johnson
Get Even More From Bustle — Sign Up For The Newsletter
From hair trends to relationship advice, our daily newsletter has everything you need to sound like a person who’s on TikTok, even if you aren’t.