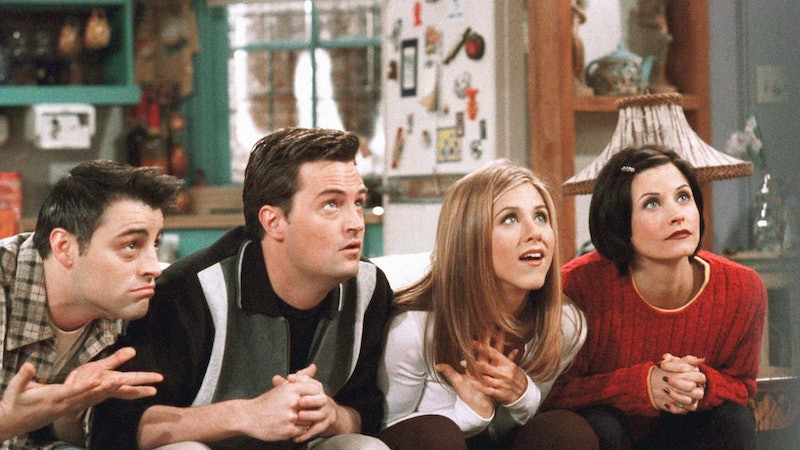 Your weekly Friends marathon is about to get an upgrade — to the big screen. In honor of the iconic sitcom's 25th anniversary, Friends episodes are coming to theaters, in order to finally give Rachel, Ross, Monica, Phoebe, Chandler, and Joey the silver screen treatment that they have always deserved.

According to Entertainment Weekly, 12 episodes of the show will be shown over three nights in the fall — Sept. 23, Sept. 28, and Oct. 2 — with four remastered episodes along with exclusive interviews and never-before-seen content airing each evening. "The cultural impact that Friends continues to have, 25 years after its premiere, is astounding," Warner Bros. Television Group President & Chief Marketing Officer Lisa Gregorian said in a statement.

She continued, "It is so amazing to know that the series is still bringing people of all ages together. We could not be more excited to deliver these digitally remastered episodes to theaters — for the first time ever! — so that together, in a shared experience, our loyal fans can enjoy some of their favorite Friends scenes in a new way." Fans can buy tickets to the Friends 25th: The One With The Anniversary event starting Aug. 16. Could we be any more excited? (No. No, we can't.)

Bringing Friends to the big screen isn't the only way that fans will be able to celebrate the show's upcoming milestone anniversary. In late July, E! News revealed that a Friends-themed pop up event will open in New York City to allow fans to live out their dreams of being part of the gang. The experience, which will run from Sep. 7 through Oct. 6., will feature individual rooms dedicated to each character, along with props and costumes from the show. Of course, the centerpiece of the whole experience will be the gang's hangout, Central Perk, which will allow fans to sit on the same couches and drink coffee just like their favorite characters.

That's not all: the pop up will allow fans to do everything, from posing with a (hopefully fake) turkey on their head, a la Monica, kicking back in Chandler and Joey's recliners, to recreating the famed opening credits sequence in front of a set of fountains. And yes, there will be a gift shop with all kinds of exclusive Friends merch, to proclaim your fandom to the world.

In early August, LEGO announced that it was creating a Friends-themed set, which will allow fans to recreate their favorite scenes from the show in their own home. "The one with LEGO bricks," the brand teased on Twitter, alongside a winking emoji, adding that the set is "coming soon," but refraining from sharing its exact release date. The LEGO set joins Pottery Barn's own Friends collection, Coffee Bean & Tea Leaf's line of Central Perk coffee and tea and a line of Friends goods and homewares from Hot Topic.

All of those exciting anniversary events should help fans deal with the fact that Friends is leaving Netflix in 2020. On July 9, WarnerMedia broke the hearts of millions of fans when they announced that the show will be moved from Netflix to the new streaming platform, HBO Max. "We're sorry to see Friends go to Warner's streaming service at the beginning of 2020 (in the US)," Netflix wrote on Twitter shortly after the news broke. "Thanks for the memories, gang."

While fans will have to bid farewell to being able to stream episodes of their favorite show on Netflix starting in 2020, at least they can give the gang the farewell they deserve in theaters. Hopefully, they'll also be able to buy coffee along with their popcorn.