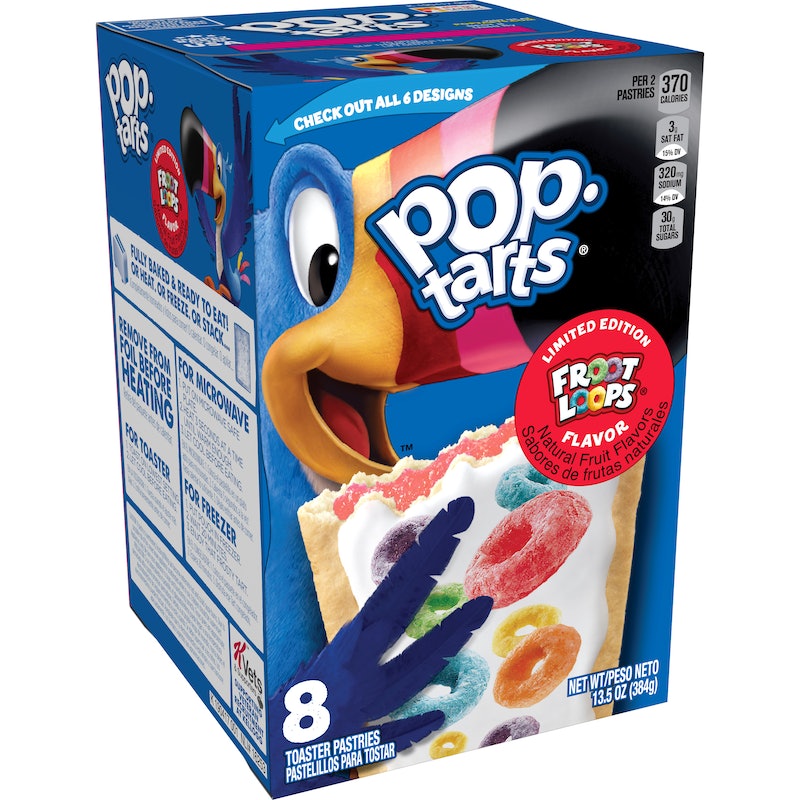 Well, it's taken decades, but we may very well have solved the greatest crisis of childhood from the '90s — which is, of course, whether you want to have Froot Loops or Pop-Tarts for breakfast. While you could ostensibly dream big and have both, now you can dream even bigger, because Froot Loops Pop-Tarts are reportedly on the way in January 2020. What a year it is going to be for both your toaster and your little '90s heart.

According to @candyhunting, a popular food Instagram account, the Froot Loops Pop-Tarts were announced at the 2019 National Association of Convenience Stores (NACS) annual trade show, which is being held in Atlanta from Oct. 1 through Oct. 4. Bustle reached out to Kellogg's, and the company confirmed with a statement: "Starting January 2020, two beloved Kellogg brands are combining for a first-ever mash up. Introducing new Froot Loops Pop-Tarts, a tasty, frooty treat with all the deliciousness you’d expect from these two favorites." (The hybrid was also confirmed in a post on the top trends displayed at the event by Food Business News.)

The flavor is limited edition, and although we know very little else about it, we do know that we may very well have @candyhunting to thank for its existence: "I posted a mockup of the product earlier this year and urged Kellogg's to make it happen," the Instagrammer wrote. "It's happening." Here's a photo that @candyhunting snagged at the NACS annual trade show of the upcoming treat.

And, because there's nothing more delicious than a receipt, here's the photo @candyhunting posted of a Froot Loops Pop-Tarts mockup way back in on April 3 of this year.

"Wishful Wednesday! A time to reflect on products that don't exist but really should. Today we have Froot Loops Pop-Tarts. Why this potentially delicious combination doesn't exist is beyond me," @canyhunting wrote in April. "Both Froot Loops and Pop-Tarts are made by Kellogg's, so they have no issue with branding. Hey @kelloggsus, these would be a hit!"

As @candyhunting pointed out, both of these brands are owned by Kellogg's, which put them in a prime position to combine forces. But while we're all jumping on this combo bandwagon, is it too early to start requesting a Frosted Flakes Pop-Tarts combo? Or would that be flying too close to the dessert sun?

As far as other Pop-Tarts flavors, this has certainly been a decent year for anyone with a sweet tooth and a toaster. In June 2019, Pop-Tarts released two cupcake-inspired flavors: Frosted Chocolate Cupcake flavor was brand new, and the Frosted Confetti Cupcake flavor made a triumphant return. Additionally, 2019 saw the return of Pop-Tarts cereal, which came in Frosted Strawberry and Frosted Brown Sugar Cinnamon. And you better believe that there's legit Pop-Tart filling in every single bite.

As for the anticipated release of the Froot Loops Pop-Tarts — while they're reportedly coming in 2020, we still don't have a firm release month for them. Bustle reached out to Kellogg's for more information, and will update this post upon hearing back. In the meantime, keep your eyes peeled for more collabs coming out of the NACS show, which reportedly include a Reese’s peanut butter-flavored cupcake, Oreo iced coffee, and Fanta Snack Packs. What a delicious time to be alive.