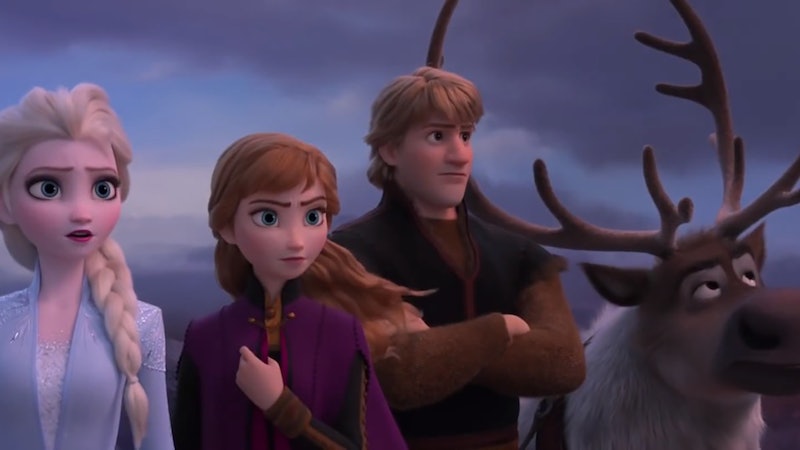 If there's one sure way to make millennials want something, it's to brand it well and make it delicious. Well, this time they've definitely done it — with new Frozen II cookie dough and vanilla morsels. Nestlé Toll House, the company that knows everything there is to know about cookies in both baked and dough form, has just announced the release of two delicious-looking Frozen II products.

The Nestle Toll House Disney's Frozen 2 Morsels are ready to be added into any cookie, brownie, or baked good — giving it a slightly Frozen feel with its icy color scheme. "Add a magical twist to your sweet treats!" the description on their website explains. "Bake these blue & white swirled vanilla morsels into cookies, brownies, or top pancakes and cupcakes to bring swirly fun to your creation! Made with REAL vanilla!"

But to me, the real winner is the Nestle Toll House Disney's Frozen II Sugar Cookie Dough — just because the real winner is always cookie dough. The sugar cookie dough is "topped with snowflake sprinkles," which is simply delightful, and it's also so easy to bake. I've been thankful to Nestle Toll House for years for making it easy for culinary idiots and lazy people like me to have freshly baked cookies without turning the kitchen into a disaster zone — or really expending any energy whatsoever. If I can do it, anyone can.

Plus, sugar cookies with a Frozen II twist have the perfect crisp feel as the weather starts to get colder, so it's time to channel your inner Elsa and sing "Let It Go" while eating an entire tray of cookies. If that's not a scene in the new movie, I'm rioting.

To say that people are excited about Frozen II would be a huge understatement. The original Frozen was a larger-than-life hit and people have been counting down the days until they can join Elsa and Anna (and Olaf!) again.

Apparently the new film will show a lot about the sisters' relationship and how it has evolved. “[Elsa and Anna] have had time to bond as a family,” Director of Story, Mark Smith, previously told Bustle. “So much of their young lives they lived apart, so they have a lot of catching up to do. Coming into this film, they are closer than they ever were.”

While a lot of people were hoping that Elsa would get a girlfriend in the second movie — especially thanks to a new female character in the trailer — it looks like Elsa will be flying solo in Frozen II, according to more recent reports. The Frozen II trailer shows Elsa venturing away from her kingdom to ensure its safety — and discovering some things about herself and her past along the way. The focus will be more on personal journeys and family relationships than Elsa's love life — because she's got some pretty big fish to fry.

With Frozen II set to be release on Nov. 22, fans can start to get really excited about the new movie. There are plenty ways to get yourself hyped for the new movie, like dressing as Elsa for Halloween, but I would say that devouring a bunch of sugar cookies or throwing blue and white swirled vanilla chips on everything you eat is a pretty good place to start. So thank you, Nestlé Toll Hous,e for making my baked good and Frozen crossover dreams come true. Today is a good day.