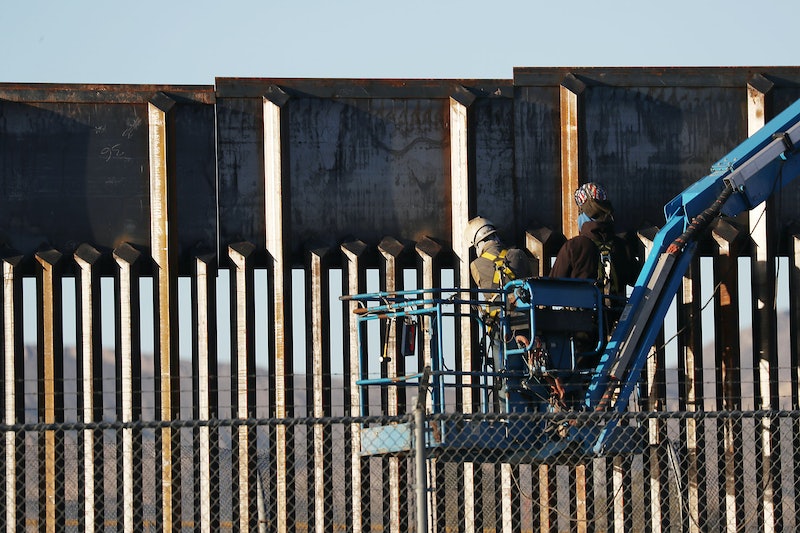 How President Donald Trump would fund his border wall has been a central question throughout his presidency, but he seems to have found an answer by declaring a national emergency back in February. The Department of Defense announced in a press release Monday night that Trump will get $1 billion for border wall construction. The money will come from Pentagon funds originally allocated elsewhere.

The $1 billion will specifically pay for the Army Corps of Engineers to build 57 miles of fencing around the sections of the El Paso and Yuma areas of the border, as well as additional road and other border improvements, according to CNN. The Pentagon's statement said that it's transferring the funds because the new construction will help “block drug-smuggling corridors across international boundaries of the United States in support of counter-narcotic activities of Federal law enforcement agencies."

Congressional Democrats have already expressed their disapproval of the move, according to The Washington Post. Ten Democratic senators on subcommittees related to military affairs sent a letter to acting Secretary of Defense Patrick M. Shanahan and Secretary of Homeland Security Kirstjen Nielsen, in which they argued that the Pentagon's decision not to get congressional approval would end up hurting the readiness of the American armed forces.

"We have serious concerns that the Department has allowed political interference and pet projects to come ahead of many near-term, critical readiness issues facing our military," the letter read. “The $1 billion reprogramming that the Department is implementing without congressional approval constitutes a dollar-for-dollar theft from other readiness needs of our Armed Forces.”

Trump made the national emergency declaration regarding border wall funding because he wasn't able to convince Congress to fund the wall, so any money that goes toward the wall will come from other military projects. As The New York Times reported, pushing off some of these projects would directly effect the lives of U.S. service members. These projects include a new water treatment facility at the Camp LeJeune Marine base in North Carolina, which would replace one that Hurricane Florence damaged in 2018.

“I hate to make it so nonchalant; a building or two may fall down before they get repaired,” John Henley, a defense contractor working at Camp LeJeune, told The New York Times.

This first $1 billion will come from counterdrug funds, according to CNN, which is what Trump said would happen when he declared a national emergency. As of right now, it looks like a fairly sure thing that this money will actually go toward the wall; on Tuesday the House of Representatives will vote on whether or not to override Trump's veto of Congress' resolution ending the national emergency, as BuzzFeed News reports, but the vote is expected to fail.

But Shanahan will testify in front of the House Armed Services Committee, so congressional Democrats will have at least one opportunity to question him about the decision to reallocate the funds.

"We look forward to hearing how he intends to pilfer the military construction accounts, circumvent the intended nature of the law, while simultaneously abusing the trust of the American people,” said Rep. Adam Smith (D- Washington), according to BuzzFeed.

More like this
Buckingham Palace Shuts Down Rumour About King Charles III's Coronation
By Sophie McEvoy and Sam Ramsden
Romance Authors Are Mobilizing For Reproductive Rights
By Natalia Perez-Gonzalez
New Coins Unveiled As King Charles III's Reign Gets Underway
By Sam Ramsden
Everything To Know About Daxxify, The Newest FDA-Approved Skin-Jectable
By Olivia Rose Ferreiro
Get Even More From Bustle — Sign Up For The Newsletter