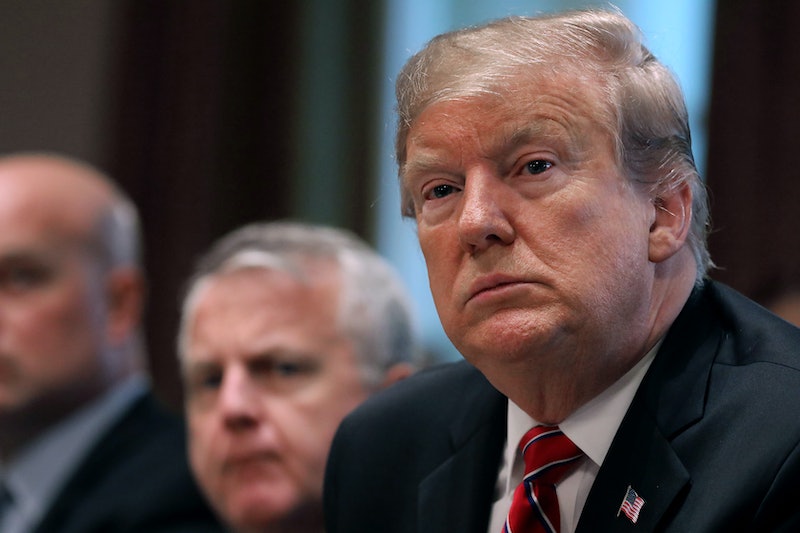 The White House announced Thursday that President Trump will declare a national emergency at the southern border. The president made the decision after Congress repeatedly refused his requests for $5 billion in funding to begin construction on a U.S.-Mexico border wall.

Update: Trump declared a national emergency to build the wall on Friday morning. "I’m going to be signing a national emergency," he said at a press conference in the Rose Garden. "And it's been signed many times before...there's rarely been a problem. They sign it, nobody cares."

Earlier: "President Trump will sign the government funding bill, and as he has stated before, he will also take other executive action — including a national emergency — to ensure we stop the national security and humanitarian crisis at the border," White House Press Secretary Sarah Huckabee Sanders said in a statement.

Experts say that there is no national crisis at the border, and in response to the White House's announcement, Speaker of the House Nancy Pelosi denied that there is a national emergency.

"It's important to note that when the president declares this emergency, first of all, it's not an emergency, what's happening at the border," Pelosi told reporters. She also confirmed that filing a legal challenge to any national emergency declaration "is an option."

It was Senate Majority Leader Mitch McConnell who first broke the news on Thursday, as Congress was debating a bill that would provide a fraction of the border wall funding Trump requested. From the Senate floor, McConnell announced Trump had informed him that he would both support the bill in question if it passed and "issue a national emergency declaration at the same time."

As it became clear that Congressional Democrats would not be approving $5 billion in border wall funding, Trump began floating the idea of declaring a national emergency. Proponents of the idea claimed that this step would give him the authority to circumvent Congress's spending authority and jump-start construction on a wall unilaterally.

Critics, including many Republicans, argued against the move on the grounds that it might not work, would likely get tied up in numerous court challenges, and would set a precedent for future Democratic president to use a national emergency declaration to enact unilateral changes to, say, climate change or gun control policy.

The funding bill Congress was debating on Thursday provides $1.375 billion in funding for physical barriers, but not concrete walls, on the border. Democrats are expected to support it, but until Thursday, it was unclear whether or not Trump would sign it, as he'd previously said he was "not happy" with the compromise legislation.

Now, the White House has confirmed that Trump will sign that bill if it passes. But it's unclear how the policies in that bill, namely the $1.375 billion in border fencing, will be affected by a national emergency declaration, if at all.

The White House hasn't said precisely what action Trump will take regarding the wall after issuing the emergency declaration. However, some have speculated that he may invoke Title 10, subsection § 2808 (a) of the U.S. Code, which says that during a national emergency, the "Secretary of Defense, without regard to any other provision of law, may undertake military construction projects, and may authorize Secretaries of the military departments to undertake military construction projects, that are necessary to support such use of the armed forces."

It's worth noting that neither the $5 billion Trump is requesting nor the $1.375 billion in the most recent funding bill would sufficient to construct a U.S.-Mexico border wall. In 2017, the Department of Homeland Security projected that building a wall would cost $21.6 billion. In January 2018, Trump himself requested $25 billion in wall funds, while McConnell has suggested that it will cost between $12 and $15 billion to build a wall.

In the weeks leading up to Thursday's announcement, some Senate Republicans suggested that they might oppose Trump using a national emergency declaration to clear up funding for a border wall. McConnell said Thursday that he supported the decision.

As many people on Twitter noted, the statement that Sanders released on Thursday, in which she confirmed that Trump will declare a national emergency, appeared to have been composed using the iPhone's Notes app.