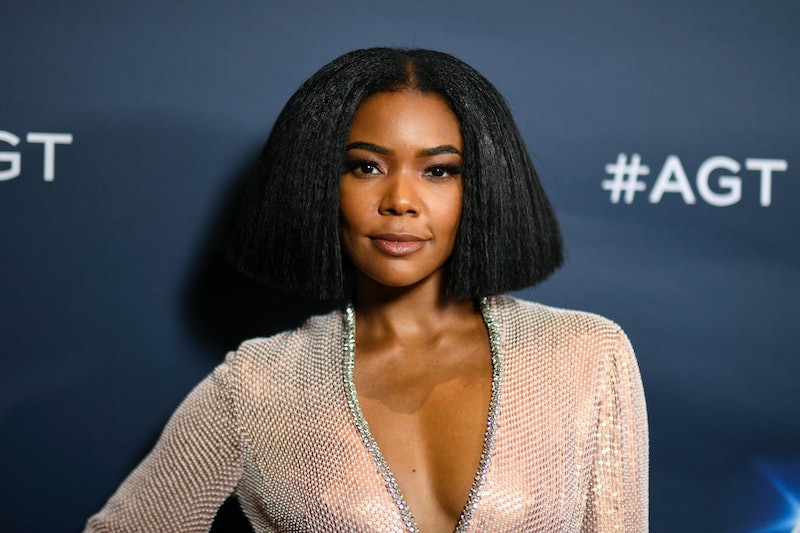 Love is love in the Wade family. Gabrielle Union defended Dwyane Wade's photo with Zion, 12, and 11-month-old daughter Kaavia James, following social media criticism over Wade's caption, which read "My Girls." One Twitter user uploaded a screenshot of the family picture, which the former NBA star first shared on his Instagram Story earlier in the week, asking, "What y'all think about this?"

Union was among those to weigh in, tweeting on Oct. 15: "Looks like love to me 🤷🏾‍♀️ I truly hope that everyone gets the love, support and hugs they deserve." The actor also joked that Kaavia (aka Kaav, whose lips are pursed in the photo) "ain't with the dumb sh*t," before signing off with "peace and blessings" for her followers.

Union, who married Wade in 2014, is also stepmother to the basketball pro's 17-year-old son Zaire and 5-year-old Xavier, and, as a family, they've always publicly supported Zion. Earlier this year, Union and Wade faced similar backlash after attending at April's Miami Beach Pride. As seen in photos posted by Union and Wade on social media at the time, Zion was surrounded by loved ones, including Union, Zaire, and Kaavia. Wade was in Toronto playing for the Miami Heat at the time, but he shared snaps from the LGBTQ+ festival anyway.

"We support each other with Pride," the NBA star captioned a shot of Union and Zion, who was holding a rainbow heart. "Wish I was there to see you smile kid!" he wrote in an additional post, while claiming in another that Zion had a cheering section. In his own IG Story posts, Zaire also sent messages of support to Zion with photo captions including, "love you lil bro no matter what" and "gotcha back kid."

As Wade explained to Variety in June, however, he would prefer to keep the specifics about how Zion identifies private "because it's Zion's story to tell." Even so, he did share that family "should support each other" in general, and asserted his believe that it's his job as a father to be behind his kids no matter what.

Prior to the Miami Pride outing, Zion walked the runway in Wade's Miami fashion show, "A Night on the Runwade" in March. As noted by Madame Noire, Union screamed in excitement as Zion twirled on the stage. Later, Wade shared the clip of Zion's modeling gig to his IG Story with the caption, "Killing sh*t."

Though neither Union nor Wade has ever spoken in detail about Zion, they have expressed their support in other ways. In September, the actor announced that the family had created their own Pride shirts and were donating "$50k and 50% of the proceeds of sales" to GLSEN, writing that, in the Wade family, they believe "inclusion and equality are two essential pillars needed to move towards growth and progressive thinking and action in our society."

And if supporting inclusion and equality means occasionally having to shut down some haters, then so be it.

More like this
"Lavender Haze" Star Laith Ashley Breaks Down Filming With Taylor Swift
By Jake Viswanath
Jameela Jamil Defends Sam Smith After Trolls Body-Shamed Them
By Jake Viswanath
Ozzie’s Coming Out Scene With Kitty On 'That ’90s Show' Has Twitter Sobbing
By Brad Witter
Kim Petras Just Made Grammy History
By Jake Viswanath
Get Even More From Bustle — Sign Up For The Newsletter
From hair trends to relationship advice, our daily newsletter has everything you need to sound like a person who’s on TikTok, even if you aren’t.