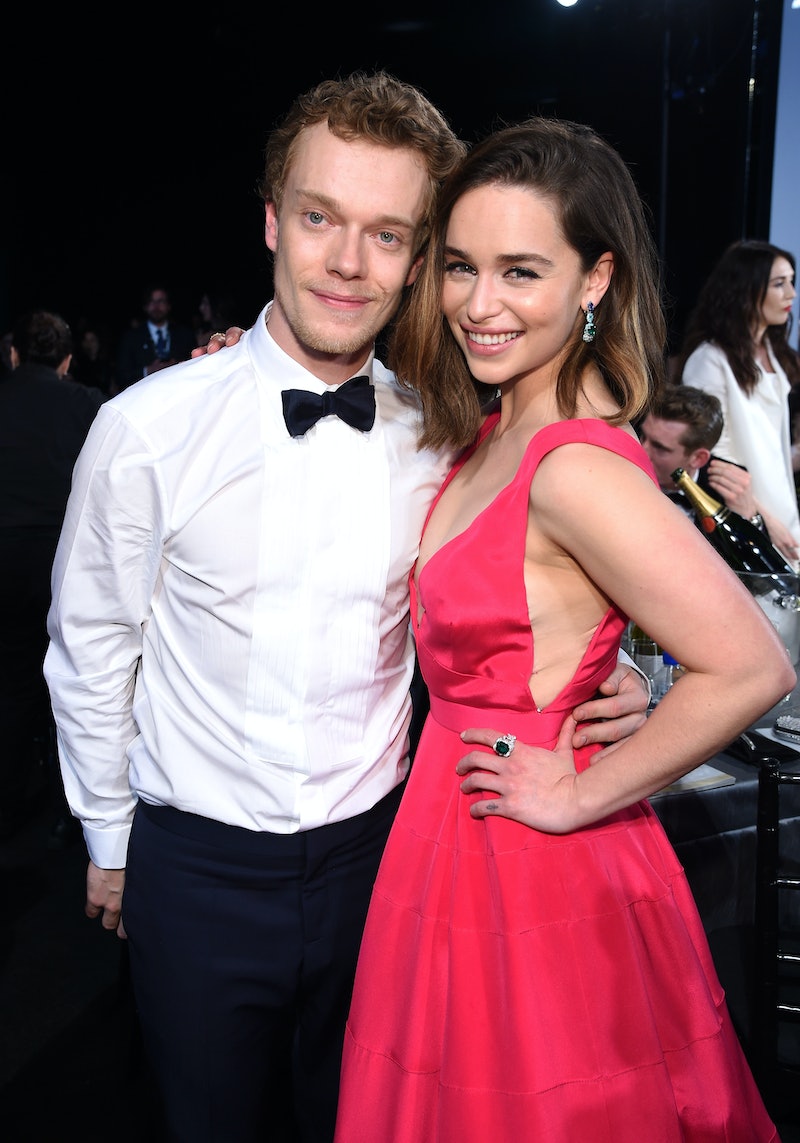 The stars of HBO hit Game of Thrones have lived some exciting lives on and offscreen. Several made appearances in the Harry Potter franchise, one is engaged to a Jonas Brother, and one apparently had a childhood encounter with the late Lady Diana. Alfie Allen greeted Princess Di with the cutest confession, per singer Lily Allen — his older sister! — who is preparing to release a memoir.

According to UK paper The Daily Mail, which has an excerpt of the singer's forthcoming My Thoughts Exactly, Lily and Alfie Allen met Princess Diana in London, in 1991 or 1992 (the reports are consistent) at the premiere of Hear My Song. The film was produced by the Allens' mother Alison Owen, per People, and Diana was in attendance. The siblings were extremely young, and what's cuter than small children presenting you with heartfelt gifts, right? So that's why the two were reportedly tasked with giving Lady Diana gifts as thank you.

Lily Allen was six and Alfie Allen was about five at the time, and here's how his big sister remembers the normal wardrobe malfunction that ensued:

"Diana the Princess of Wales came to the premiere. I was a flower girl and gave her a posy, Alfie had a box of handkerchiefs to give her but somehow he got his k— caught in his trouser zip moments before meeting her."

In non-British slang: The actor, then extremely young, got a sensitive body part caught in the zipper of his pants immediately before meeting Princess Di.

And then he told her about it.

As the pop star remembers it, she handed the royal her followers and gave a nice curtsy — but when it was her brother's turn, he was crying a little from his incident. Per People:

What an anecdote to have! While the article doesn't include how the royal family member responded, at least fans know that things turned out all right for Alfie Allen. He famously took over the lead role in Equus on the West End, once Harry Potter actor Daniel Radcliffe left, and that's a role that required full-frontal nudity. Plus, later on, as fans well know, he took on the role of Theon Greyjoy on Game of Thrones. Before he was castrated by Ramsay Snow (and later Bolton) in Season 3, Theon was known to be a bit of a cad. (In fact, said behavior is what encouraged his captor to castrate him in the first place).

So, evidently, notable stories about his, um, personal business, are something of a recurring theme in the actor's life. But hey, that's still probably a little better than being best known for the subject matter of 2007 hit "Alfie," right? Just saying.

While fans still can't be sure of what Lady Diana said in response to Allen's confession, it's safe to assume that it was helpful and kind. After all, he was a little kid, and obviously shocked by what had just happened; of course he was going to blurt it out. And she had young sons of her own — known today as William, Duke of Cambridge and Henry, Duke of Sussex — so it was probably nothing new for her. On the bright side for Alfie Allen, this is at least one thing that won't befall Theon on the next season of Game of Thrones.