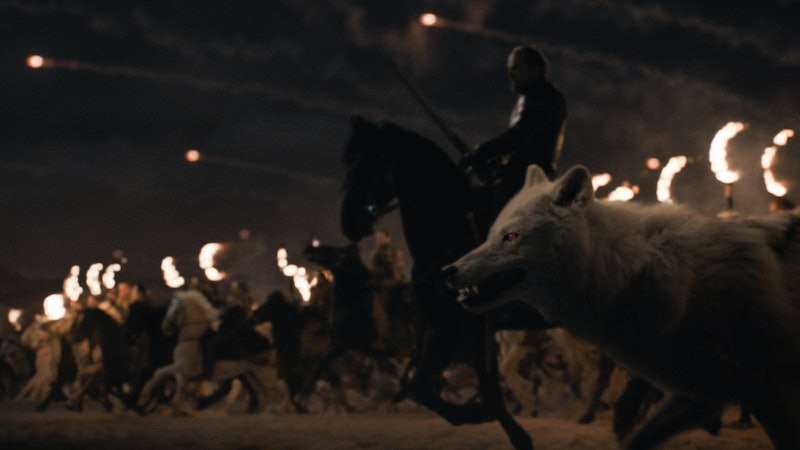 "The Long Night" is pure spectacle from start to finish, but it turns out it could have been even cooler. In a new podcast interview with IndieWire, the episode's director Miguel Sapochnik revealed there were preliminary plans for an army of direwolves to join the Battle of Winterfell. Sadly, the idea never got off the ground — given how expensive it is to render a single direwolf, an entire pack would surely have been a nightmare. Still, the thought of what might have been if the production team didn't have to consider pesky things like money and time will surely haunt fans.

During a two-hour conversation about his experience directing on Game of Thrones, Sapochnik said of the initial plan for the episode, "There were many things that happened, that people would have been so happy to have happen. Attack of Direwolves and crazy stuff. At some point you're like, '50 Direwolves attacking an undead dragon does not make a good movie.'" That last point is definitely debatable.

Despite the sheer amount of undead soldiers descending on Winterfell in "The Long Night," the episode has relatively low stakes in retrospect. The death toll in terms of the main characters is shockingly low, and despite being at the center of the conflict, Bran "Three-Eyed Raven" Stark has little to do for the duration of the battle. The introduction of the direwolves could have added a fun narrative throwback and made Bran useful at the same time.

Prior to the episode, fan theories circulated that Bran would use his abilities to warg into one of Daenerys' dragons or Nymeria, Arya's wild direwolf, who could then lead her pack into the battle to fight for the living. Instead, Bran peaces out early on to monitor the situation through the eyes of some ravens until Arya makes her way to the godswood and kills the Night King. All in all, it wasn't the best use of the future King of Westeros' powers.

It's important to note that Sapochnik doesn't reveal the circumstances that would lead to the direwolves joining the battle, so there's no way to know if their presence would have been thanks to Bran. Thanks to an already complex shoot, it doesn't sound like the idea made it very far. It certainly wasn't filmed. Another idea that was left on the cutting room floor? The Night King showing off his ice spear moves.

It seems in the early stages of planning, series creators D.B. Weiss and David Benioff wanted the Night King to get his own battle scene. Now, he does get to pull off that killer re-animating the already dead undead trick, but there could have been more badassery before Arya took him down. Sapochnik explained,

"There was an extended battle sequence where you saw the Night King fight. Very long. There was a whole bunch of stuff that was going to happen. But when we got there, not to shooting but in the process of prep, you start to prioritize what's important, and this is a micro-version of what we're just talking about. At the end of an 80-minute battle, do I really care if the Night King's got some fancy moves with his spear? Do I really give a sh*t about that? What I care about is this moment which for me I really enjoyed doing and watching where Theon, Bran, and the Night King stand in this surreal, fairy tale-ish kind of landscape ... That's got more punch to me than now the Night King does some fancy staff moves."

Again, that's a matter of opinion. Given how easily the Night King went down after eight seasons of building up his legend, a few more ice spear throws would have been nice.

Ultimately, the final cut of "The Long Night" is pretty good, but there's nothing that can't be improved by a pack of direwolves taking down an undead dragon. Or seeing the Night King being the big bad he was built up to be. The list of things that could have happened on Game of Thrones just keeps getting longer, and it's hard not to ponder what might have been.