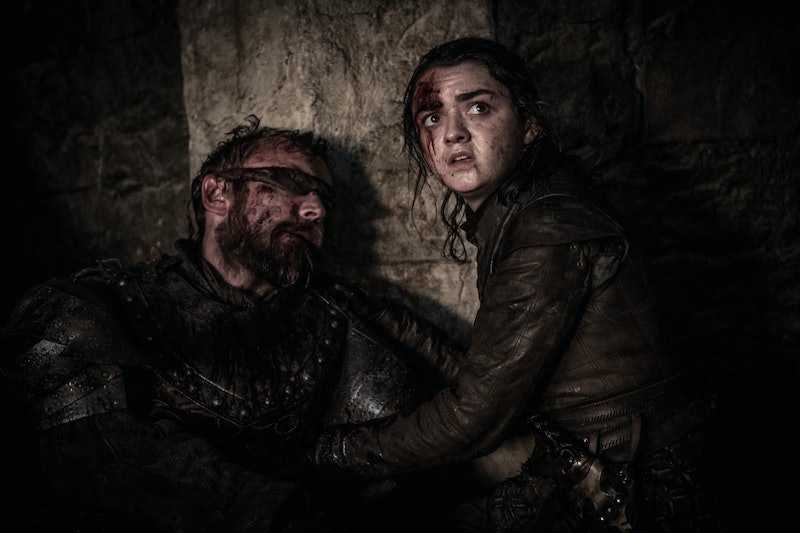 Remember right before the Game of Thrones episode "The Long Night" aired on April 28, everyone was preparing for the worst? People preparing their goodbyes to fan-faves like Brienne, Jorah, and the people in the crypts in anticipation of the long awaited Season 8 battle episode. But in the end, the amount of characters that survived, even under unthinkable circumstances, made it a lackluster episode when it came to deaths (but Arya of course made it worth while in the end). Well, it turns out that The Battle Of Winterfell death toll could have been way higher according to the episode's director.

Speaking on IndieWire's Filmmaker Toolkit podcast in June, director Miguel Sapochnik shared what he had hoped would happen in the now infamous Battle of Winterfell. "I wanted to kill everyone,” said Sapochnik, as a true GoT creative would say. "I wanted to kill Jorah in the horse charge at the beginning. I was up for killing absolutely everyone. I wanted it to be ruthless, so that in the first 10 minutes, you say, ‘All bets are off; anyone could die.’" That is, of course, how GoT has always positioned itself since Season 1. No one, not even main characters — and certainly not main characters that are pregnant — are safe. But with this last season, it's like the showrunners and writers were saving all the big deaths for the very last minute, but in doing so strayed away from this defining characteristic of the show.

According to Sapochnik, his desire for more blood shed put him at odds with Game of Thrones showrunners David Benioff and D.B. Weiss. "And David and Dan didn’t want to. There was a lot of back-and-forth on that," he told Indiewire. In the end, fans know exactly who won that fight, as most of the show's main characters survived the battle against the Night King unscathed.

That said, Sapochnik succeeded in killing Ser Jorah, but at the end of the episode instead of the first 10 minutes. And there were other significant deaths, too, like Melisandre, Beric Dondarrion, Theon Greyjoy, Lyanna Mormont, and of course the Night King. But at the same time, it just felt like they played it safe.

Sapochnik also directed other heavy hitters in the series, like the episodes "Battle of The Bastards" and "The Winds of Winter," the last two episodes in Season 6. And, interestingly enough, he did get his massive death toll when he directed "The Bells," the Season 8 episode in which Dany burned King's Landing to the ground, killing most of the people in the city. Make no mistake, Season 8 of Game of Thrones include a lot of death, just not of main characters, at least not in a satisfying way (looking at you, Cersei Lannister).

Regardless, Sapochnik doesn't really regret his direction in any way, and he knows at the end of the day, the script wasn't his to write, and that includes making decisions about who lives and who dies. "I think a key thing is, like, it’s not my show, right? I didn’t come up with the show and make it," he said. "I am a hired director to go and do that. They have let me in and let me be involved, and I’ve really loved doing that. But final cut is not mine. Final cut is theirs; it’s their choice."