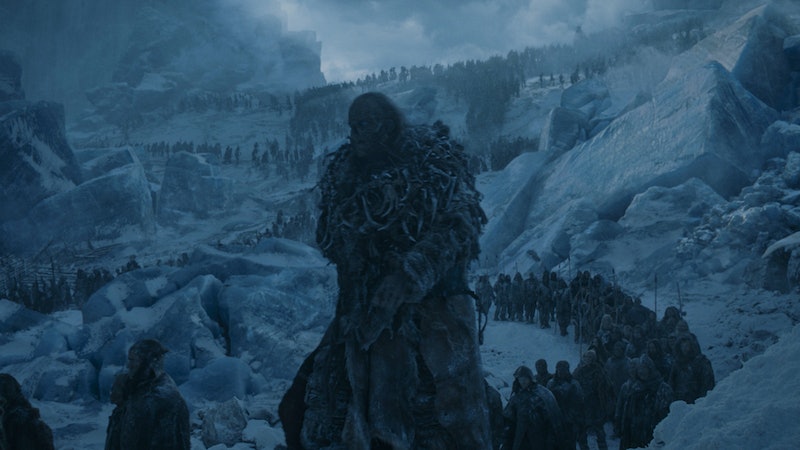 If any character has ever known what's up on Game of Thrones, that character is Old Nan. Through her bedtime story told to Bran in Season 1, she talked about The Long Night, the White Walkers, and now it seems she predicted ice spiders coming to Game of Thrones Season 8, too. OK, so it hasn't been confirmed that any monstrous, undead arachnids will appear in the final season. But George R.R. Martin did tweet the cover art for the 2020 A Song of Ice and Fire calendar, and it puts the icy monsters front and center.

Martin captioned the terrifying image: "Here's an official sneak peak of John Howe's cover art of our 2020 SoI&F calendar featuring the legendary ice spiders which haunt old Nan's creepiest bedtime stories." The choice to put the ice spiders on the cover should have fans raising their eyebrows since, so far, they've been assumed to be fictional both in the book series and on the show.

Now that the Wall has fallen anything is possible. Season 7 brought fans an undead polar bear, and with the Night King's army pushing farther South, they may very well bring a few creatures that were assumed to be mythical along with them. And even if spiders of any size scare you, there's no denying that giant ones would be useful in sneak attacks — or if the need to scale castle walls comes into play.

Even though they've only been referenced once on the show, it would still make sense for ice spiders to make their Westeros debut in Season 8. Previously, the White Walkers were thought to be a myth too, and everyone knows how that turned out. The tale that Old Nan told Bran in Season 1 has been pretty spot on so far, so there's no reason that the "packs of pale spiders big as hounds" bit shouldn't come true, especially during a time when Westeros is once again facing an unforgiving winter.

Season 8 is the show's final chance to get as weird and scary as it wants, and hopefully, the writers will take advantage of the final six episodes to give viewers a few visual surprises. An ice dragon is cool and all, but it will be a bit disappointing if the Night King's army doesn't include a few beasts that fans have never seen before, as well. Hey, if the guy can have chains strong enough to pull a dragon out of its watery grave, then he should also have a few giant spiders on hand to terrorize Jon Snow and company, right?

Even if Season 8 doesn't include ice spiders, that doesn't mean they'll never appear in the world of Westeros. The prequel series, which Martin is tentatively calling The Long Night, would be a great place to introduce the arachnids. While not a whole lot is known about the prequel just yet, HBO has revealed the series' synopsis, which reads:

"The series chronicles the world’s descent from the golden Age of Heroes into its darkest hour. From the horrifying secrets of Westeros’s history to the true origin of the White Walkers, the mysteries of the East to the Starks of legend, only one thing is for sure: it’s not the story we think we know."

If that's not the perfect place for ice spiders, then nowhere is — except for Season 8. Because, come on, the world deserves the chance to see Samwell Tarly facing down a hound-sized, undead spider with his Valyrian steel sword. Make it happen, HBO.