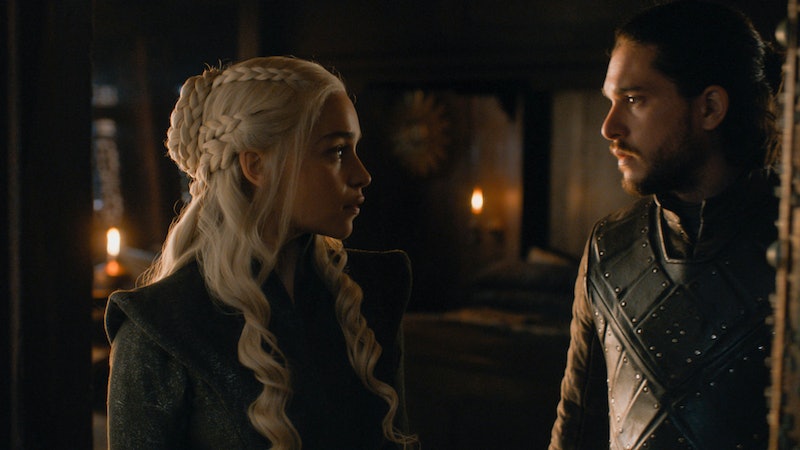 The ice is coming for Westeros, but so is the fire. HBO's new Game of Thrones Season 8 teaser is a short, but welcome reminder of what's to come in the show's final season. Yes, the Night King and his army pose a major threat, but the promo also suggests that fans shouldn't forget about Cersei.

Without showing a single frame of new footage from the actual show, HBO manages to serve up a thematic teaser that brings together fire and ice in an unexpected way. The promo begins by showing the icy chill of winter spreading across the North via the map of Westeros that's located in Dragonstone. Tellingly, the ice overtakes not only the direwolf that signifies House Stark, but also the dragon that symbolizes House Targaryen. Since Daenerys aligned herself with Jon Snow and the people of the North in hopes of stopping the Night King at the end of Season 7, this imagery is particularly powerful. But the teaser doesn't end there.

There's fire coming from the South, and it engulfs the lion that represents House Lannister. The only lion left in the South is Cersei, the reigning Queen of Westeros, who refused to send any part of King's Landing's army North to help stop the Night King. Her words to Jaime made it clear that she believes the threat of the White Walkers won't make it to her door, and if she's lucky, they'll destroy Daenerys and Jon's campaign while they're ravaging everything else.

However, ice and fire meet in the middle of the battlefield in this cryptic look at Season 8, and the collision brings with it a new wall that's poised to divide Westeros in half. It's hard not to read in to the striking imagery, especially when it appears to be hinting that Cersei is just as much of a threat in the final season as the Night King.

Until HBO offers up a full trailer, all fans can do is speculate about what these latest hints mean for the final season. But having something new to speculate over is more than enough for the good people of Twitter — especially since the April premiere is still nearly four full months away. To be fair, the premium channel doesn't exactly need to drum up excitement for Game of Thrones, so even 38 seconds of video that doesn't feature a single character from the show feels like a gift.

And it's one that the Twitter-verse is cherishing if the majority of the reactions are any indication. This unexpected present is an especially good one considering just how many hints it packs into such a short amount of time. Just because Jon Snow's not fighting the Night King doesn't mean this collision of fire and ice doesn't have plenty to say.

HBO is taking their time doling out information about the final season — there's not even an official premiere date yet — but every morsel is worth analyzing. For instance, have fans been wrong about Daenerys representing the fire in the title of the book series that inspired the show? Is Cersei actually the fire? What does it all mean?

Those answers will come soon enough, but for now, just enjoy having a new teaser to theorize over while you countdown to spring.