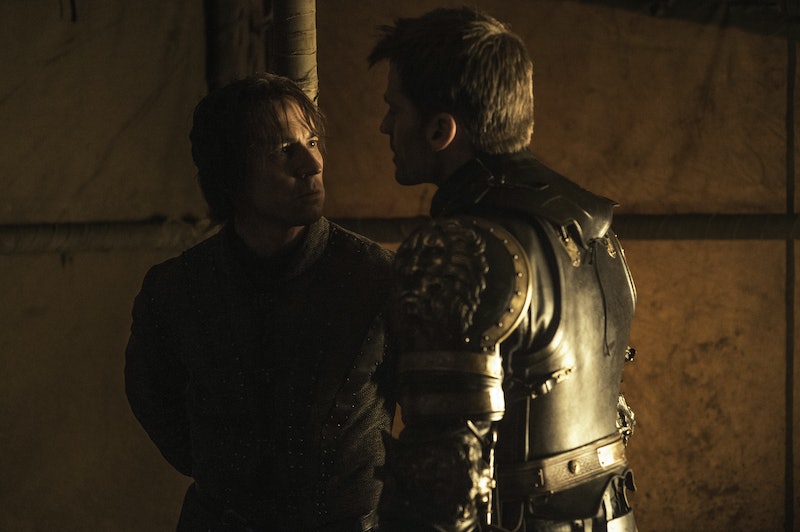 Sorry, House Tully fans, but Game of Thrones Season 8 may not include Edmure Tully. Given the sheer amount of characters that have passed through Westeros, it only makes sense that not everyone will have a satisfying conclusion. According to a new Digital Spy interview with Tobias Menzies, Catelyn Stark's brother is likely to be a character whose story will remain open-ended.

Menzies, who recurred as Edmure in Seasons 3 and 6, told Digital Spy that he has no idea what fate has in store for his character. He explained,

"The honest answer is, I have no idea. He's obviously somewhere in a prison, he's still around alive somewhere. They're pretty stingy with their information and I've not heard anything from them. I feel like they have so many stories to tie up, whether that's a story they'll want to go back to, I don't know."

Filming of the final six episodes of Game of Thrones is currently underway, so if Menzies hasn't received a call from the producers yet, that probably means he's not going to. Ellie Kendrick, who played Meera, is facing a similar situation, according to Metro. In Nov. she told the paper of her potential involvement in Season 8, "I wait for the phone to ring and then I find out, but it hasn't rung so I don't know. I'll find out whether I am or not at some point, but for now I haven’t been notified so I'm yet to discover."

While it's frustrating to know that not every character is going to receive a satisfying conclusion, it may be better for the show in the long run. With just six episodes left, Game of Thrones is better off spending its time resolving the stories of Jon Snow, Daenerys Targaryen, Arya Stark, and Cersei Lannister than revisiting relatively minor players like Edmure and Meera.

Viewers have seen what happens when the show ends up with more characters to service than it has time — see the Sand Snakes — and it's not pretty. Given how little time is left in the series, the fate of Edmure may be better off remaining a mystery. Then again, just because Menzies doesn't appear to be returning for the final season, that doesn't necessarily mean there won't be a mention of his character.

Edmure was last seen being forced to help the Lannisters take Riverrun from his uncle, the Blackfish, in Season 6. He was presumably returned to the Freys as a prisoner after the successful siege, but since Arya murdered all of the male Freys, it's unclear what exactly became of Edmure after his niece got her revenge for the Red Wedding. Since the White Walkers are now marching into Westeros, viewers may receive an update about the remaining Freys and Edmure as the undead army moves farther south.

Whether or not an Edmure update is part of the plan for Season 8, it's unlikely that too many fans will be upset about the character's open-ended story. As brilliant of an actor as Menzies is, he was never given much to do as Catelyn's brother. The prospect of not seeing Meera again is far more disappointing, especially since she received such an unceremonious dismissal from Bran.

The good news is that Menzies and Kendrick have thriving careers beyond Game of Thrones. Menzies is currently starring in AMC's new horror series The Terror, and he has a role in the upcoming TV adaptation of King Lear. Meanwhile, Kendrick has been cast in the BBC and Masterpiece series Press, according to IMDb.

Game of Thrones Season 8 may not have room for Edmure and Meera, but at least the actors are staying busy while their former costars prepare for their final battle back in Westeros.