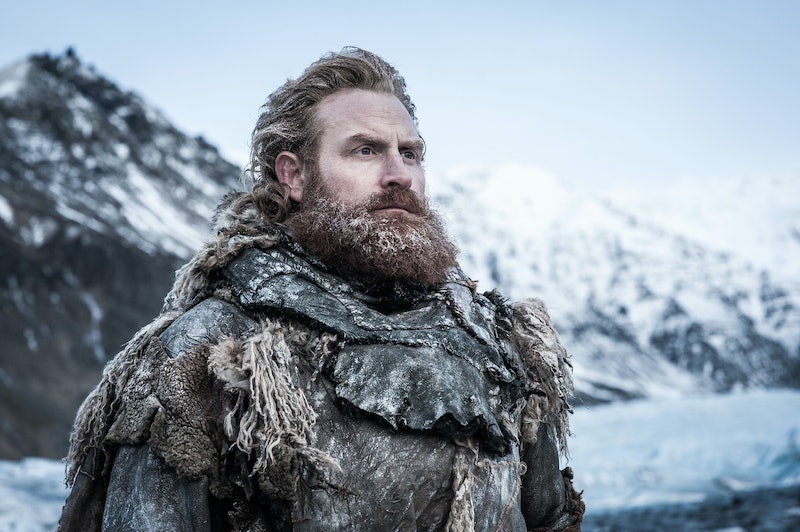 One of the big question marks at the end of Game of Thrones Season 7 was how in the world Tormund and Beric Dondarrion could possibly survive the collapse of the Wall. Fans will have to wait until the Season 8 premiere on April 14 for the answer to that question, but rest assured, the men are alive — for now. And while he didn't share much in the way of spoilers, in a new interview with Entertainment Weekly, Kristofer Hivju did reveal how Game of Thrones Season 8 will vindicate Tormund and the Wildlings.

It's no secret that the people of Westeros are dismissive of the Free Folk. They've long denied the possibility that there's still magic in the realm or that the White Walkers could be more than a scary bedtime story. With the Night King's army marching on the Seven Kingdoms, no one can deny that the Wildlings were right all along, and that's going to give Tormund a sense of validation for him and his people.

Hivju explained to EW what his character is feeling as the season begins. "He wants closure," the actor told the publication. "All the Free Folk grew up with the horror stories of the White Walkers, like that story Nan told Bran in Season 1 with the ice spiders — except having seen them. This has been the terror of their worst nightmare as long as they’ve existed. Tormund has confronted them many times. This is the nightmare moment where you have to face centuries of bad dreams."

If any character can face the White Walkers head on, it's Tormund — a man who has proven on more than one occasion that he doesn't believe in half measures.

For now, Hivju just seems pleased that fans finally know he'll have a role to play in the final season. It remains unclear just how big that role will be, or even what it will entail, but the Season 8 trailer did confirm that Tormund and Beric live through the Wall's destruction. Now the actor is just eager to see how viewers will respond to Tormund living to fight another day. He shared with EW that his hopes for a positive response are The Hound levels of high.

"I sat in a bar when I was shooting The Fate of the Furious and I watched an episode of Thrones with diehard fans, and it was like seeing a sporting event," the actor said. "I didn't understand the impact of the show until watching it with other people. It was the episode where [Rory McCann's character, the Hound, who was presumed dead for a time] came back, and there was this roar. I'm going for that."

Since he's a fan favorite and one of the few characters with a healthy sense of humor, there's no doubt that the fandom will be happy to have Tormund around for what's sure to be a bleak final season. And even though it would be nice to know whether or not he'll make it to Winterfell in time to reunite with Jon Snow and Brienne before they face the Night King, the idea that Tormund and the Free Folk are being proven right is satisfying all on its on. (Even though it's not exactly good news for Westeros.)