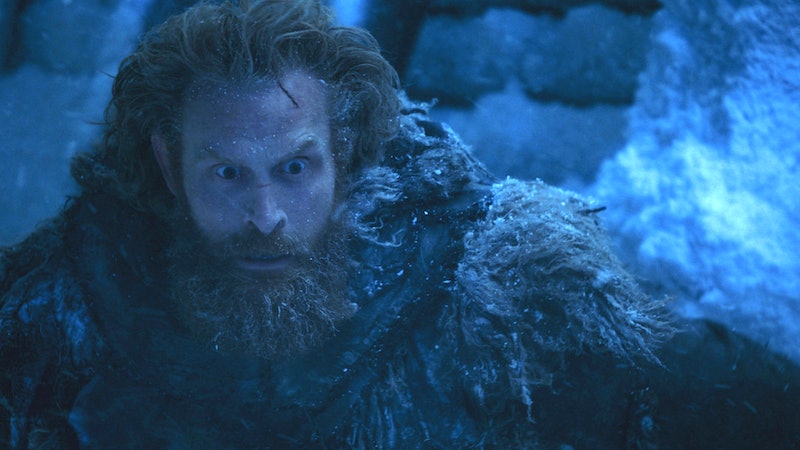 During the final moments of the Game of Thrones Season 7 finale, something was destroyed: our emotions. That's because Tormund might be dead on Game of Thrones, because he was on the Wall when the Night King rode an undead Viserion into battle and lit that Wall up like firecrackers on the Fourth of July. However, there are some clues that Tormund survived Viserion's attack that fans can cling onto during this trying time. Sure, it seems pretty cut and dry that no man could face down a dragon and live, but, hey, we've seen people do it before. Who's to say Tormund can't do it, too?

Dry your tears, Thrones fans. Optimism is the name of the game now that we're down to a handful of core characters that are so important that there probably won't be any more Robb Stark moments. Good things happened in the finale: Littlefinger is dead, Arya and Sansa are stronger than ever, and Jon and Dany finally had their incestuous sex scene. Game of Thrones Season 8 will likely be full of more good things mixed in with all the bad, and here are a few clues that one of those good things will be Tormund's miraculous survival.

As INSIDER's Kim Renfro noticed, there was a section of the wall that didn't fall, and that could have been the section that Tormund and Beric ran to. (Although, Winter Is Coming said that the portion that Tormund was on did fall. But you can choose to believe Renfro.)

2. Jaime Lannister Just Faked Us Out, Too

Remember when "The Spoils of War" ended with Jaime falling into the water after being tackled by a soldier before a dragon could turn him into charred meat and we all thought he was dead? Well, he was alive, and so Tormund is probably alive, too.

3. Fans Want Him & Brienne Of Tarth To Hook Up

Fans are really, really invested in seeing Tormund and Brienne of Tarth get together. There are even some fans who think Tormund is a better match for Brienne than Jaime is. Considering the Game of Thrones showrunners didn't let a little thing like incest stop fan favorite couple Jon Snow and Daenerys Targaeryn from getting together, Tormund probably won't die before he and Brienne become a thing.

If you don't see a body, then they're not really dead. Isn't that a rule? Well, it should be a rule.

As TIME pointed out, the official synopsis for "The Dragon and the Wolf" reads, "Pieces of the Wall begin to collapse, as Tormund and his wildings rush to safety." He rushed to safety, everyone. We can relax.

6. He Was With Beric

Beric has already died six times. It none of them took. And, as he told Jon Snow early in Season 7, he believes he's been brought back for a greater purpose. There's nothing great about being killed on the Wall by an undead dragon. And because Tormund was with Beric, who surely has a greater role to play in the series, then neither of them can be dead now.

Take these clues and let them comfort you in the cold, cold days to come. Not only is the Night King marching on Westeros, but Tormund may have been his first casualty.