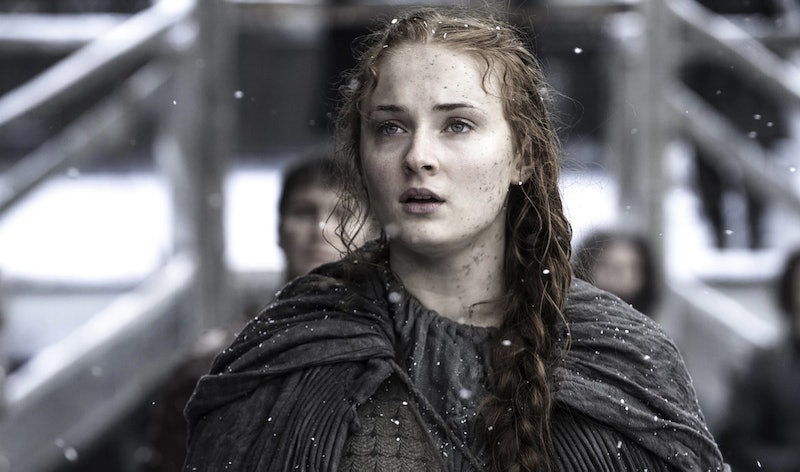 If you stumbled upon a filming location sign that read “FACE OF ANGELS” within the last several months, then you won the game… of Thrones. While filming Season 8, Game of Thrones went by a codename so any mortal who walked by the set would not know Game of Thrones Season 8 was filming right there. And that codename, as actor Sophie Turner revealed in a recent interview with Digital Spy, was "Face of Angels." The actor who plays Sansa Stark added, “It's a random one!”

“Face of Angels,” you say? Is this codename really random? Is it? Or is it a clue about the final season of Game of Thrones? Could it be a reference to some big twist that happens in Season 8? Do… do the White Walkers morph into angels? Does Viserion morph out of his ice dragon state and into an angel dragon state? Do the Faceless Men morph into Faceless Angels? Or is it really random, just as Turner said? And how long until we get answers??? *Checks calendar.* Ugh, 2019 is so far away.

Of course, Game of Thrones is not the first production to use a codename instead of its actual title while filming. It is a thing that happens all of the time in the film and TV industry. But GoT’s quest to keep its cloak of secrecy drawn tight doesn't begin and end with a fake production title. Turner also told Digital Spy that every member of the GoT cast was assigned a codename "so that no one knew who was really going to be on set."

Wow, what’s next? Scripts that self-destruct after 24 hours— oh, wait. As Elite Daily reported earlier this year, Nikolaj Coster-Waldau did say the Season 8 scripts would disappear the second they were done shooting. During an interview at Cannes, the Thrones star said,

“They’re very very strict. It’s reached a crazy level this year. We actually get the scripts, and then when we’ve shot the scene — and we only have it digitally — and then when you’ve done the scene, it just vanishes. It’s like Mission: Impossible. 'This will self-destruct.’”

And no, the scripts weren't on some shared Google Doc. In a recent interview with Metro, GoT actor Joe Dempsie said the Season 8 script was only available via some "special app." Dempsie explained,

"Your filming dates are on a need to know basis. You don’t get hard copies of scripts anymore. They are all on this special app. Which are triple locked. The level of security has upped massively."

As far as protecting one of the biggest TV shows of all time's secrets goes, it looks like you really can't be too careful. As The Morning Call reported last fall, HBO confirmed GoT would shoot “multiple versions” of the show's ending "so that there’s no real definitive answer until the end."

Game of Thrones has always gone to great lengths to conceal what happens on upcoming seasons. For example, when it came time to film Season 6 — aka the season after Jon Snow was stabbed in the stomach and left to die — the name "Jon Snow" did not show up on any script. The reason: keeping Jon Snow's return as under wraps as possible. As Entertainment Weekly reported in 2016, Kit Harington's character was called “LC,” which was short for "Lord Commander."

Aaaand who else is picturing Lauren Conrad on Game of Thrones? Let the snow fall down, and wake my dreams, let it wash away my Face of Angels.