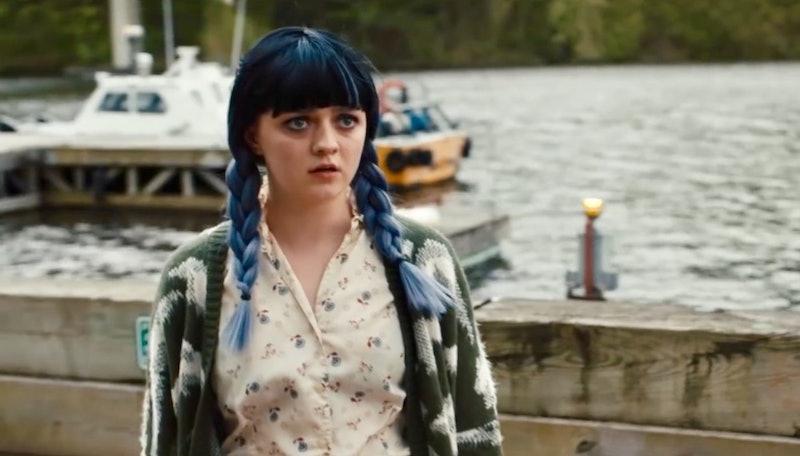 As is the case for Arya Stark in Game of Thrones, the trailer for Maisie Williams' new movie, Then Came You shows her new character waking up each day not knowing if it's her last. But that's where the similarities between this coming-of-age dramedy — which also stars Asa Butterfield and Nina Dobrev — and the HBO juggernaut end.

In the preview for the film — premiering in select theaters and on demand nationwide on Feb. 1 — Williams plays terminally ill Skye (in this case, a girl does have a name) who's written a "to die list." ("It's like a bucket list but not as lame," says the colorful-haired Skye, in the actor's native British accent.)

Here's the official Then Came You synopsis (courtesy of Deadline):

"Skye (Williams) is a spunky teenager with a terminal illness who befriends Calvin (Butterfield), a 19-year old hypochondriac who is afraid of his own shadow. Calvin helps Skye carry out her eccentric bucket list of things to do before she dies. In the process, he learns to confront and conquer his own fears, including falling in love with the beautiful but seemingly untouchable Izzy (Dobrev)."

As evidenced by the Then Came You trailer, the movie is sure to give you all the feels. While some scenes look like they'll definitely elicit laughter, there also seems to be just as many to tug at the heart strings.

The film's preview begins with Butterfield's Calvin intently reading a testicular cancer brochure, and while we see the character undergoing medical tests, you can also hear a doctor in a voiceover telling Calvin that nothing is wrong with him and his "health issues aren't physical." To quickly lighten the mood, however, the trailer next shows him reaching down in his jeans to do a self-check in the waiting room — and a mother covering her daughter's eyes. Caught offguard, Calvin tells the horrified mom, "I thought I felt something."

OK, so maybe Calvin is kind of a hypochondriac. And it only gets more complicated when we see the seemingly healthy young man in a support group for the terminally ill. Enter the meeting's latecomer, Skye. ("I'll be late for my own funeral, she says.") Her jokey disposition is present through most of the clip, though it could possibly (likely?) be a coverup for her fear of dying. (And as a text card reads in the trailer, "She's running out of time.")

Anyway, back to that "to die list." After Calvin decides to help her tick off her wishes, Skye can't seem to hide her excitement. Cue a montage of the pair's hijinks, including: dressing as a hot dog and chicken, sliding down a fireman pole (and, later, getting behind the wheel of a firetruck), wearing Halloween costumes to a party where no one else was dressed up, driving a garbage truck, creating graffiti, fencing in a park, and attempting to outrun the police. After an elderly store owner comically tazes Calvin, however, they end up in jail in side-by-side cells.

Then comes the parts where you may need a tissue (or several). "It's so unfair, I should have my whole life ahead of me," Williams' character tells Calvin from atop a diving board.

Adds Calvin to Skye in the trailer: "You terrify me, you excite me, and when you're not around, I miss you."

Whether or not their relationship remains platonic through the film's end, there is one complicating matter: Calvin's major crush on Dobrev's flight attendant Izzy, who eventually introduces herself to a fumbling, awkward Calvin in a particularly endearing moment. "You think she's too cool for me?" Calvin, who appears to also be an airport employee, asks Skye.

Not afraid to tell it like it is, Skye responds, "She's too everything for you."

In that same vein, the trailer also ends with a laugh. When a shirtless, swimsuit-clad Calvin attempts to try his hand at diving, Skye calls out his, er, package. "Oh my god, you're erect!" she jokes, causing him to, again, awkwardly cling to the diving board.

Then Came You is, of course, just one of several upcoming non-GoT projects for Williams, who is set to star as Wolfsbane in Marvel’s X-Men: The New Mutants next year. Per The Hollywood Reporter, her character is “a girl struggling to reconcile her religious beliefs with her power to turn into a wolf.”

But all eyes will surely be tuned to HBO when Williams' Arya returns to Winterfell one last time for Game of Thrones' final season premiering in April. "Season one to eight, that’s what I wanted," she said in Elle UK's October issue. "I was in the first episode and I want to be in the last."

Will her characters Skye and/or Arya survive? Fans will have to watch Then Came You in February and then Game of Thrones beginning in April to find out.