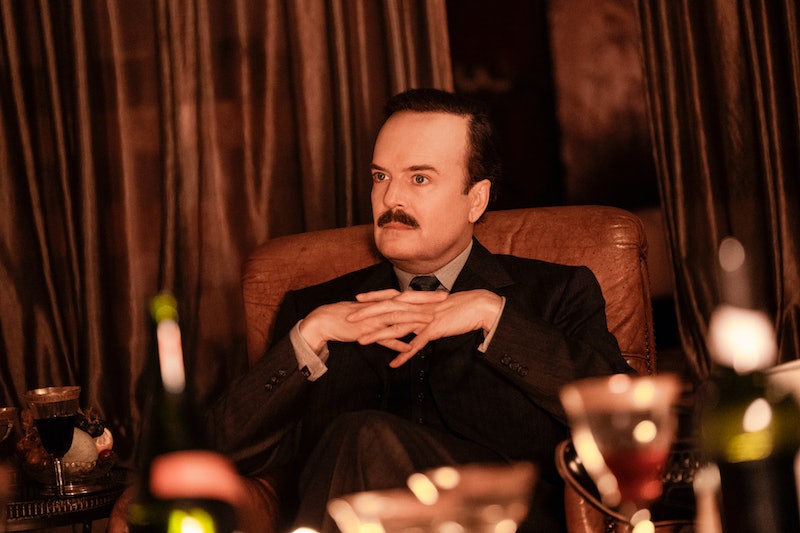 There are plenty of mysteries to be concerned about while watching TNT's miniseries I Am the Night, but perhaps you've been too distracted by George Hodel's house to fully process this complex and twisted tale. Fauna Hodel came face-to-face with her grandfather's fascinating home in Episode 2. But as Jay and Fauna dig deeper into George's past, viewers will discover that the home is full of sinister secrets. And while the show is a fictional take on true events, the Sowden House on I Am the Night is a very real place.

Per the official website for the Sowden House, Lloyd Wright (son of architect Frank Lloyd Wright) built the house in 1926 for his friend, photographer John Sowden. The Los Angeles-based home located at 5121 Franklin Avenue is inspired by the Mayan pyramids and as Architectural Digest reported, it's also known as the "Jaws house." Beyond the unique facade, the mansion was designed as a rectangle with all four wings looking into the central courtyard. There were major renovations to the interior of the building in the early 2000s, but the house still maintains its original allure. Through the Sowden House website, you can go on a 3D tour of the property or check out the gallery photos.

The Sowden House has had many owners over the years, but Hodel may be the most notorious resident. As Curbed reported, the famed gynecologist bought the home in 1945. His children and his ex-wife Dorothy Huston Hodel also moved in, and Hodel's son Steve wrote on his blog that the family lived there from 1945 to 1950. According to Curbed, the home would be the scene of many parties hosted by Hodel for his friends like surrealist artist Man Ray and director John Huston (Dorothy's former husband).

During the time that the family lived there, Fauna's mother, Tamar Hodel, alleged her father had sexually abused her. George denied the accusation, but the case went to trial where he was acquitted. Still, his son Steve, a former Los Angeles detective, has continuously claimed his father committed other crimes at the house. As he wrote in his book Black Dahlia Avenger, Steve believes his father murdered Elizabeth Short, aka the Black Dahlia, at their family home. (According to The Guardian, George was a suspect in the 1947 case, but was never charged with anything).

As The Hollywood Reporter noted, I Am the Night was given permission to film on location at the Sowden House. The current owners are husband and wife Dan Goldfarb and Jenny Landers, who purchased the home in 2017. They use the space not only as their home, but to host entertainment and charitable events, too. "This house has this crazy history and we wanted to utilize it in a positive way and share it with the community," Landers told THR. Besides I Am the Night, Sowden House may look familiar because, as the The Cannifornian reported, it has been used in The Aviator, America's Next Top Model, and the XX's "I Dare You" music video.

At the Los Angeles premiere of I Am the Night, Variety spoke to the cast and crew about filming at the actual Sowden House. "It has a very, very heavy energy there. During filming I felt physically ill a lot of the time," said India Eisley, who plays Fauna. "It's just so isolated, it feels like a mausoleum. You could imagine someone screaming in there and not being heard."

Patty Jenkins, who directed and executive-produced for the series, personally knew the real Fauna, and was grateful that they were able to film at the house. But she agreed with Eisley that there was something unsettling about the location. "That house is one in a million. It's unbelievable. It's also such a huge character in the story. I felt so lucky that the people who live there are so lovely and made it possible for us," Jenkins said. "But I did feel nauseous a lot when I was there, and odd. I was thinking, 'Maybe this is how I sense hauntings.' I definitely didn't feel well."

Meanwhile, Jefferson Mays, who portrays George, said that filming there allowed him to get a better feel for his character. "This sounds so sick to say, but I felt oddly at peace and comfortable," Mays told Variety. "I learned so much about the man's character by seeing that place, which is truly a monstrous place. It's based on a Mayan temple. There are no windows. There's this great, gaping, toothed maw of an entranceway, and it's utterly dark. You go in and you're sort of sucked up this esophagus of an entrance, a lightless hallway scourged into the central courtyard, and all the rooms are arranged around the courtyard like cells. I felt like I was in a penitentiary, one of those 18th century panopticons. It's the house of a control freak, and it's a super villain's lair."

Again, Hodel wasn't tried or committed for any murders, so his connection to the Black Dahlia is pure speculation. But TNT's miniseries is certainly suggesting that his character was involved in the murder, and thanks to the Sowden House, I Am the Night has the real-life home of Hodel to set the eerie tone.