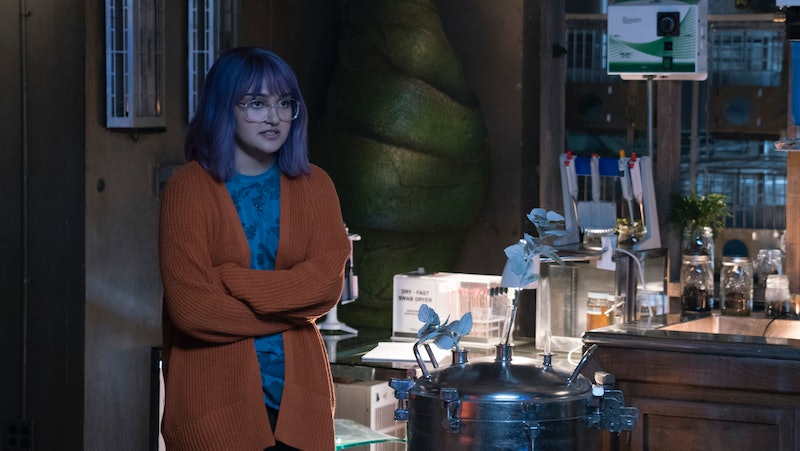 The kids are not alright in The Runaways Season 2. They've escaped their parents, but there's a long road ahead — particularly for Gert Yorkes, who has to learn how to manage her own mental health quickly and in increasingly stressful environments. As part of a roundtable interview at New York Comic-Con, actor Ariel Barer discussed Gert's anxiety in Runaways Season 2 and how it contributes to her journey as a hero and a feminist.

"I think it was very important to handle [her anxiety] with respect and for it to not take away from her as a superhero," says Barer, "and I think it's really wonderful that it's explored in a way that lets her be a strong person and shows that there is strength in having these mental illnesses and these roadblocks, but being able to overcome and use it."

In Season 2, Gert is struggling without her medications that, like the rest of her possessions, are stuck at home with her villainous parents. The group can scavenge for food and find shelter, but anxiety medication is just as important and a little more difficult to come by while on the run. There's also, you know, the dinosaur who shares a psychic link with her and is affected by her metal state. This is a supernatural world, but it's important that Runaways does not treat Gert's anxiety disorder as a disability or just a quirky personality trait befitting a Manic Pixie Dream Girl.

"I think it is an important thing to show a strong character who is not defined by this mental illness and isn't weakened by it," Barer says, "but doesn't deny it and it's a part of her."

This aspect of Gert's character wasn't a part of the original comics, but Barer says it's a welcome update; she appreciates the fact that the show can address Gert's struggles openly and help continue to destigmatize mental illness. That's especially important given that Runaways is aimed at younger audiences. According to John Hopkins Review, instances of depression and anxiety in young people have risen considerably in the last ten years. And our culture is slowly learning treat the topic as less taboo. Though more teens are reporting depression and anxiety, Psychology Today noted that youth suicide rates have declined since the '90s, likely due to anti-depressants and lifting stigmas surrounding mental health treatment because more and more teens are clinically depressed and experiencing anxiety.

"It makes everything a little harder," Gert tells Chase in the second episode of the new season — whether that means psychically controlling a dinosaur, being there for Molly when she's hurting, or kissing the boy she wants to kiss. Being forced into an intense living situation forces some intense conversations between Gert and Chase that may or may not lead to some majorly 'shippy moments.

"I think that's a great dynamic because it's them learning to be vulnerable in new ways," Barer says. "He wants to be this protector and be this masculine figure for her, but he also understands where she's coming from and he isn't so glued to the idea." They're ebbing and flowing, she says. Self care sometimes means asking for help, and opening up to loved ones is an important step.

Humanizing superheroes by showing that they also suffer from mental illness is something that Marvel has done well in the past — Iron Man 3 was a very real look at PTSD, and Logan explored dementia. Gert's arc on Runaways is not just a commitment to that kind of character-based storytelling, it's vital representation of what it means to be a young person struggling with anxiety in 2018.