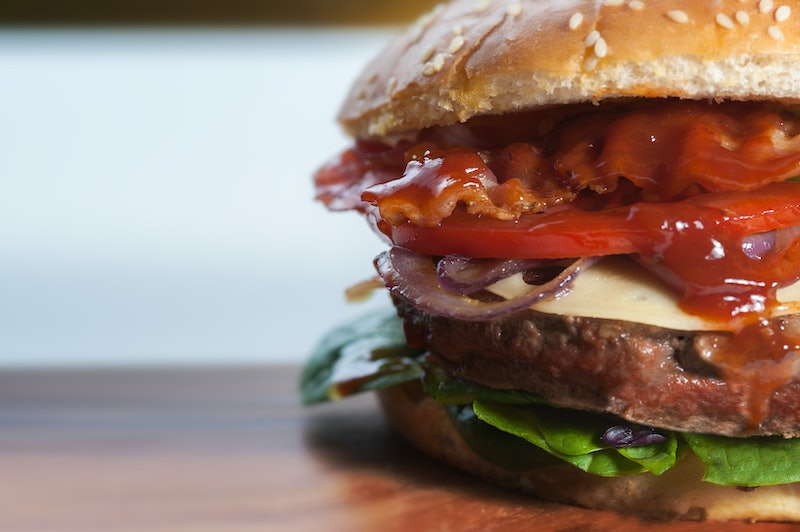 And today in things that will likely ruin summer completely, we have this: According to science, getting bitten by a lone star tick might cause you to become allergic to red meat — which, uh, really puts a damper on all those backyard barbecue plans you might have had this season. What’s more, many reports are currently saying that lone star tick bites are on the rise: According to Wired, new “hot spots” include Duluth, Minnesota; Hanover, New Hampshire; and the eastern tip of Long Island — not, hitherto, areas where the lone star tick typically thrived. Awesome.

According to the delightfully/horrifyingly named CDC page “Geographic distribution of ticks that bite humans,” the lone star tick is usually found in the southeastern and eastern areas of the United States; basically, if you live anywhere from the middle of Texas, Oklahoma, Kansas, or Nebraska all the way over to the edge of the East Coast, you’re probably in lone star tick territory. It’s responsible for transmitting a range of illnesses that I cannot pronounce, including Ehrlichia chaffeensis, Ehrlichia ewingii, tularemia, and Southern Tick Associated Rash Illness (STARI). Although the CDC doesn’t mention it, a 2015 report from NPR notes that Rocky Mountain Spotted Fever might also fall under the lone star tick’s purview.

So, how exactly can a bite from this particular tick make you suddenly allergic to red meat? According to National Geographic, it all comes down to a particular sugar molecule that’s spread from lone star tick bites. The molecule is galactose alpha-1, 3-galactose, often referred to as Alpha-Gal (no, not that kind of Alpha-Gal) for short; it’s found in most mammalian cell membranes. If you’re bitten by a tick that’s carrying it, though, it could prompt your body’s immune system to totally reprogram itself. Vanderbilt University allergy and immunology fellow Cosby Stone explained it to Nat Geo as follows: “You’re walking through the woods, and that tick has had a meal of cow blood or mammal blood. The tick, carrying Alpha-Gal, bites you and activates your allergy immune system.” As a result, your body starts making Alpha-Gal antibodies — and evermore, your body will fight Alpha-Gal molecules whenever they’re introduced to your system, including when you eat red meat. (Red meat is full of Alpha-Gal.)

NOT IF YOU HAVE AN ALPHA-GAL ALLERGY, RON.

I do have a couple of pieces of good news for you, though: First, if you’re bitten by a lone star tick and exposed to Alpha-Gal, you might not necessarily develop an allergy; and second, contrary to popular belief, developing an Alpha-Gal allergy doesn’t mean you necessarily have to become a full-blown vegetarian if you don’t want to.

Regarding the first point, we haven’t yet figured out exactly why some people end up with Alpha-Gal allergies after getting bitten by lone star ticks; said Andrew Nickels, M.D., assistant professor of Medicine and Pediatrics and an allergist at Vanderbilt’s Asthma, Sinus and Allergy Program, “A susceptible human’s immune system then develops molecules called IgE that are specific to the alpha-gal allergen. Once this occurs, they are prone to have allergic reactions. No one knows why some people who are bitten are susceptible to developing IgE antibodies and why others are not.” But the fact remains that even if you’re bitten, you might be one of the lucky ones who doesn’t actually develop the allergy.

And regarding the second point, it’s specifically red meat that’s the problem — not all meat. (#NotAllMeat? #SorryNotSorry.) The Sydney Morning Herald reported back in 2013, beef, pork, and lamb might give you problems, but chicken and fish probably won’t.

That said, though, you’ll still want to make yourself familiar with the symptoms of Alpha-Gal allergies, particularly if you live in areas where the lone star tick is known to rear its ugly little head. If you develop the allergy, anaphylaxis might be experienced several hours (around three to six, according to most experts) after exposure to Alpha-Gal; your lips, eyes, tongue, and/or throat might swell; you’ll probably experience some respiratory issues or difficulty breathing; you might get hives; vomiting or diarrhea might occur, and your heart rate might go up while your blood pressure goes down.

Alas, there isn’t a treatment or cure for Alpha-Gal allergies; the best you can do is manage it through careful diet adjustments — eliminating red meat, cutting down on dairy, that kind of thing. EpiPens can be useful for addressing immediate allergic reactions, although if things are really bad, don’t hesitate to get yourself to a hospital for emergency care.

I don’t say all this just to freak you out; it is, however, worth being aware of, especially since there’s a ton that scientists still don’t know about lone star ticks, Alpha-Gal allergies, and a lot of other related issues. According to Wired, researchers are working hard at getting ahead of the whole thing; immunologists Thomas Platts-Mills, Scott Commins, and Jeff Wilson, for example, are “[checking] news headlines to log new cases of catastrophic hamburger aversion” and gathering as much data by phone from allergy clinics and academic centers across the entire United States in order to build a “red meat allergy incident map” so we can at least figure out what the geographical spread of the whole thing is.

But, y’know, pay attention: If you go for a walk in the woods, pick a tick off yourself, and later find that you’re having trouble breathing after eating a cheeseburger, you might want to get yourself checked out.