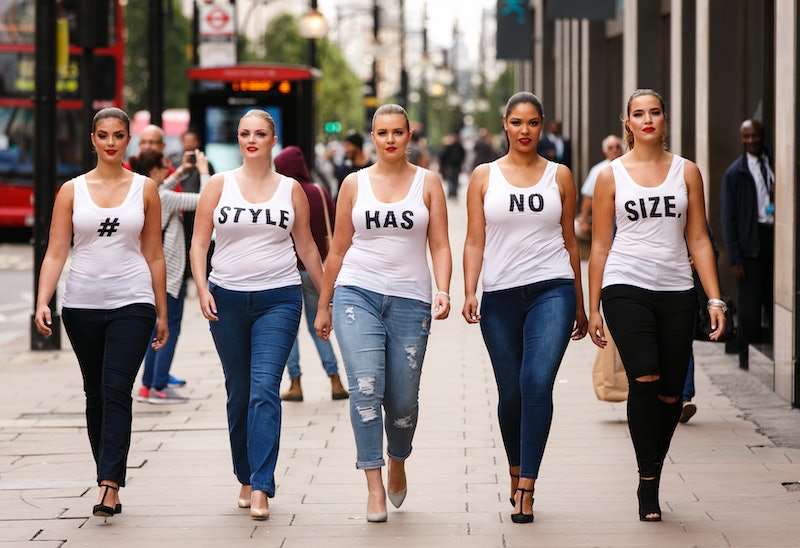 Digital retouching of women’s bodies is so commonplace in our society — from ads, to editorials, to TV — that Getty Images' recent decision to ban photos of digitally slimmed models is actually revolutionary. Despite growing support of diverse body type representation in mainstream media, we still see already-thin models digitally slimmed down all the time. Cara Delevingne was digitally slimmed down just last year for her role in Suicide Squad, despite the fact that she’s one of the most sought after models out there. And back in 2015, Victoria’s Secret digitally slimmed one of their models so enthusiastically that they essentially photoshopped off one of her buttcheeks. Yikes!

But, it should be noted that Getty’s body positive shift doesn’t appear to motivated from a strictly moral standpoint. Though Getty told the folks over at i-D that the company “has made a concerted effort to change the way women and other marginalized communities are represented in media and advertising" over the past few years, their email about the policy change tells a slightly different story. A new French law, coming into effect Oct. 1, discourages media from retouching photos in order to increase realistic representation of body shapes and sizes in France, and this move by Getty is in order to make sure the company is in compliance with the new law. Getty’s email announcing the ban also said, “Other changes made to models like a change of hair color, nose shape, retouching of skin or blemishes, etc., are outside the scope of this new law, and are therefore still acceptable.”

The law — which applies to print, online, posters, campaigns, and catalogs — requires all publications to include the words, "photographie retouchée" (or "retouched photograph") on all images that have been retouched. Retouched images have been linked to poor body image and self-esteem, and the potential for disordered eating as a result of those feelings. The new French law actually came as two separate efforts, with the first one being a move to ban all models from working unless they have a "healthy" BMI, and a doctor's note saying so — a move that has been criticized because of how it polices women's bodies.

Companies and publications that don’t cooperate with the new prong of France’s new law will be fined up to $44,000. French lawmakers are hoping this new legislation will help combat eating disorders among French youth, and it’s definitely a good start. As France's Minister of Social Affairs and Health, Marisol Touraine, put it when announcing the new regulation last year, "Exposing young people to normative and unrealistic images of bodies leads to a sense of self-depreciation and poor self-esteem that can impact health-related behavior.”

Luckily, Touraine’s is a view shared by more and more high fashion companies these days. Earlier this month, an agreement was made between James Scully — the casting director who famously called out Balenciaga's mistreatment of models last year — and rival fashion conglomerates LVMH and Kering that all size zero and underage models are henceforth banned from the runways of Gucci, Louis Vuitton, and Dior.

So while it’s definitely fair to say that Getty’s decision isn’t necessarily a total win for body positivity, there’s no question that it’s a super exciting step in the right direction. If one nation can create a law that successfully pushes an image company as massive as Getty to stop with the digitally slimmed down photos of women’s bodies, then it’s probably just a matter of time before more companies follow suit.

Here’s hoping banning these types of photos will eventually become so normal that no one even bothers to write about it. In the meantime, vive la France!

More like this
I Have Eyebrow Alopecia – & Microblading Gave Me My Confidence Back
By Jessica Morgan
Why You're Seeing Green Bandanas At Abortion Rights Protests
By Lexi Inks
Yes, You Can Buy Off-White’s New Beauty Range In The UK
By Tomi Otekunrin
How To Get Your Hands On Manolo Blahnik’s Latest Birkenstock Collab In The UK
By Vivian Iroanya and Rachel Mantock
Get Even More From Bustle — Sign Up For The Newsletter