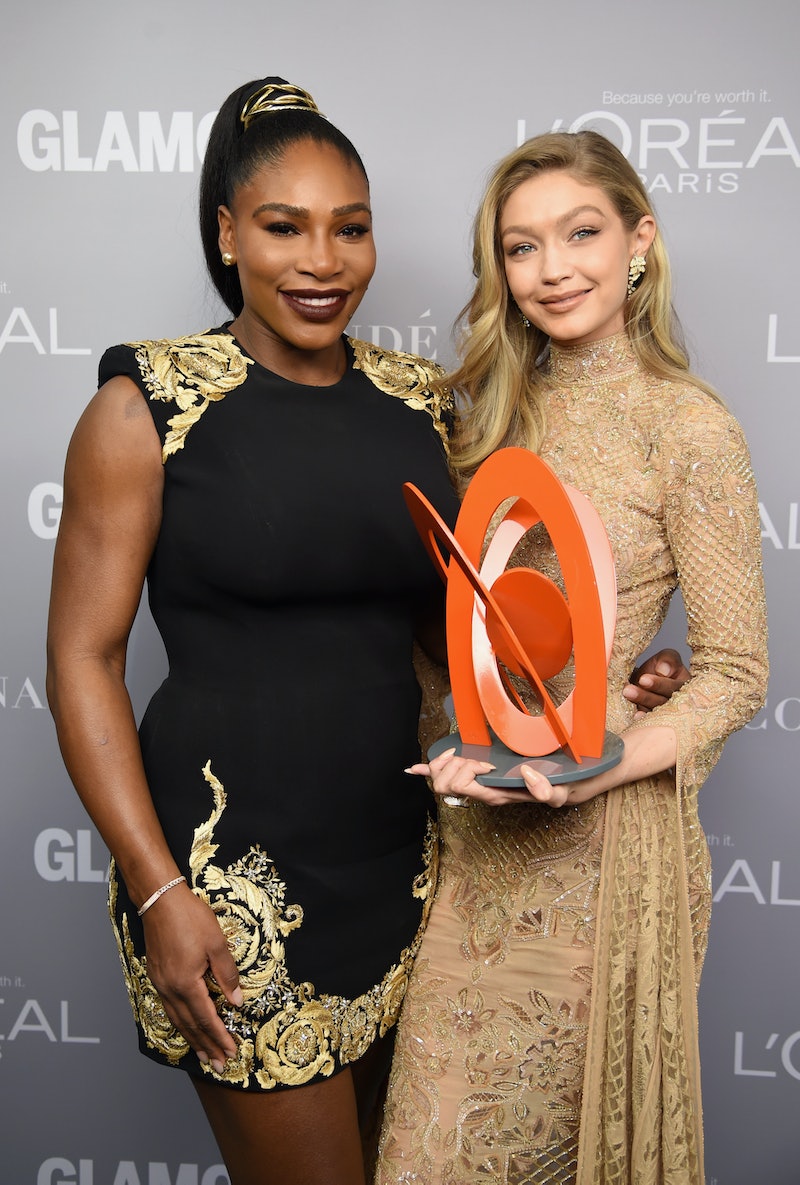 If you've been following along with the adventures of Gigi Hadid and Tyler Cameron, you would know that the two models are going pretty strong. The latest on the "TyGi" front featured Gigi Hadid and Tyler C. having dinner with Serena Williams, as E! News reported. And, yes, it is as random and awesome as it sounds.

Gigi and Tyler were, once again, living it up in New York City. This time, they had a tennis great by their side during their hangout. According to E! News, the former Bachelorette star, Gigi, Serena, fellow tennis player Caroline Wozniacki, and a couple of the supermodel's friends all went to La Esquina together to munch on a "laid back" Mexican meal. Based on their report, it sounds like it was a low-key dinner, in which all parties got to simply relax, eat tacos, and have fun. In other words, it was the perfect get-together

"They had a fun dinner," a source told the publication, "There [they] were there for about an hour. Everyone was in great spirits, laughing together and enjoying their dinner. It was very casual with everyone just hanging out and chatting." Going from group dates with Luke P. to grabbing dinner with a supermodel and the greatest tennis player of all-time? Yep, sounds like Tyler is definitely living his best life.

At first glance, this mash-up of personalities may seem a bit random. But, as Entertainment Tonight noted, Gigi and Serena have actually been friends for quite some time now. Back in November 2017, shortly after the tennis pro welcomed her daughter, Olympia, she presented the supermodel with an award at Glamour's Women of the Year event.

During the event, the athlete told her friend, "Gigi, you're one of the few people on this planet I would leave my baby for one night." Gigi had some equally kind words to say about Serena as she accepted the honor, saying, "Serena, I just want to say you have been such a beautiful light in my life for so many years, and I can't tell you how happy I am to call you my friend."

As for Gigi and Tyler's connection, it's well-known that the two models have been spotted hanging out on multiple occasions as of late. In addition to going on numerous hangouts in early August, the pair most recently took a big step in their rumored relationship when they took a trip upstate, as they were photographed in a Starbucks in Lake George, New York on Aug. 15, as Us Weekly reported.

In light of their many get-togethers, a source told E! News that Gigi and Tyler's connection is the real deal. "The connection is there for sure," the source previously told the publication. "She looks really happy and calm with Tyler around. It's like she is herself around him, no pretense of act." A separate insider offered some insight into how the Bachelorette contestant is feeling about their connection, "Tyler likes Gigi and definitely wants to keep seeing her. He wasn't sure if it would turn into something but they have are having a lot of fun and don't want it to end, that's for sure."

Between their many NYC get-togethers (with tennis champs, no less) to taking trips upstate, it sounds like Tyler and Gigi are well on their way to being one of Hollywood's hottest couples.