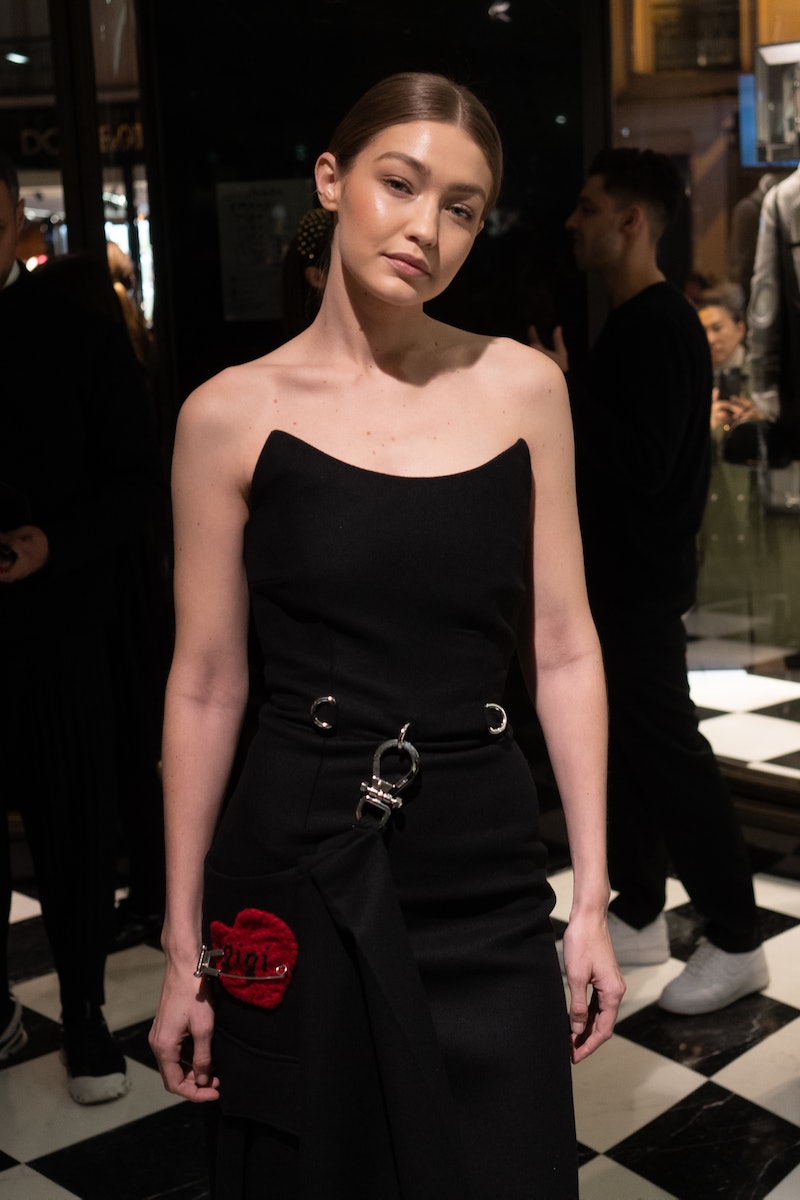 At just 23-years-old, Gigi Hadid is one of the biggest and most-widely recognized supermodels in the world. And while it may seem that she's living it up while gracing the runways of some of fashion's most prestigious design houses, it's important to remember that she feels the pressures of life, just like the rest of us. As part of Variety's recent Power of Women New York issue, Gigi Hadid discussed learning to be herself amidst fame and got super emotional, revealing that everything in her life is not always as glamorous as it seems.

Although Hadid's career and public image require her to appear perfect in front of cameras, her comments to Variety come as a lesson that many women can relate to when it comes to being true to oneself. Sharing that she's "learned a lot about" herself throughout her personal journey, Hadid explained,

"I’ve learned to be honest with myself and celebrate myself, protect myself, be assertive when I need to. I always want to be kind, but that doesn’t mean I need to let people take advantage of me. I’ve learned my connection with the Earth, going to places where I can be myself and not worry about being photographed. Although in moments I’ve resented it, I think that overall, I wouldn’t be as developed within myself without it."

Despite having former model, Yolanda Hadid, and real estate mogul, Mohamed Hadid as parents, being a young woman entering the modeling industry hasn't been a total cake walk for the runway superstar. Variety noted that Hadid teared-up during the Q&A while discussing some of the peaks and valleys she's faced over the years.

"I always wanted success for myself. I wanted to support myself. I wanted to get to a place where I could have creative freedom and start to have more power to shape my life," Hadid told Variety. "Fame is something that I deal with and learn about every day. I’ve had my ups and downs with it for sure, because overall, it’s definitely a learning process."

When asked why the subject brought her to tears, Hadid explained,

"It makes me emotional because at times, fame makes you feel out of control of your life. I think it’s tough. Obviously, people judge you. People can create a headline or an opinion about someone based on a small moment or a mistake... I think that I’ve always tried to learn and improve any time I’ve made a mistake or did something that I wasn’t proud of."

To that end, it seems that Hadid's drive to prove that she could do it on her own eventually began to take its toll.

"In the beginning of my career, I knew I came from privilege. And I knew that I needed to be here and prove myself. I think after saying 'yes' for so many years, it got to a point where I was a bit run down," she revealed.

Given Hadid's seemingly stellar work ethic (she's been basically been ubiquitous on runways, magazines, and commercials for the past few years) it certainly comes as no surprise that have been hectic for the runway model. She spoke openly about her issues handling work/life balance while chatting with Variety, sharing that things became extremely draining for her two years ago. She said,

"I could say, 'Let’s find a way I can feel whole every time I go to work.' We have created a space and way that I can schedule my work. And how we do that is that I have time to go to my farm and feel balanced."

While declining to answer a question about where her farm was located, as a means to protect her peace, the former Real Housewives' guest star explained, "I got to a place where I had to say, 'It’s okay to not be okay all the time, and it doesn’t make you less professional. It doesn’t make you a b*tch.'"

Finding herself amidst fame has, no doubt, been an emotional process for Hadid. However, it seems that she's finally managed to gain control of some aspects through being an authentic version of herself. She added, "The more opportunity that I have to meet people and share my genuine self or sit with them or talk to them, that gives me so much empowerment, because I feel like I can control that moment."

Although we may not be as famous, Gigi Hadid's comments about learning to be celebrate your authentic self are guidelines that many of us should definitely learn to live by.