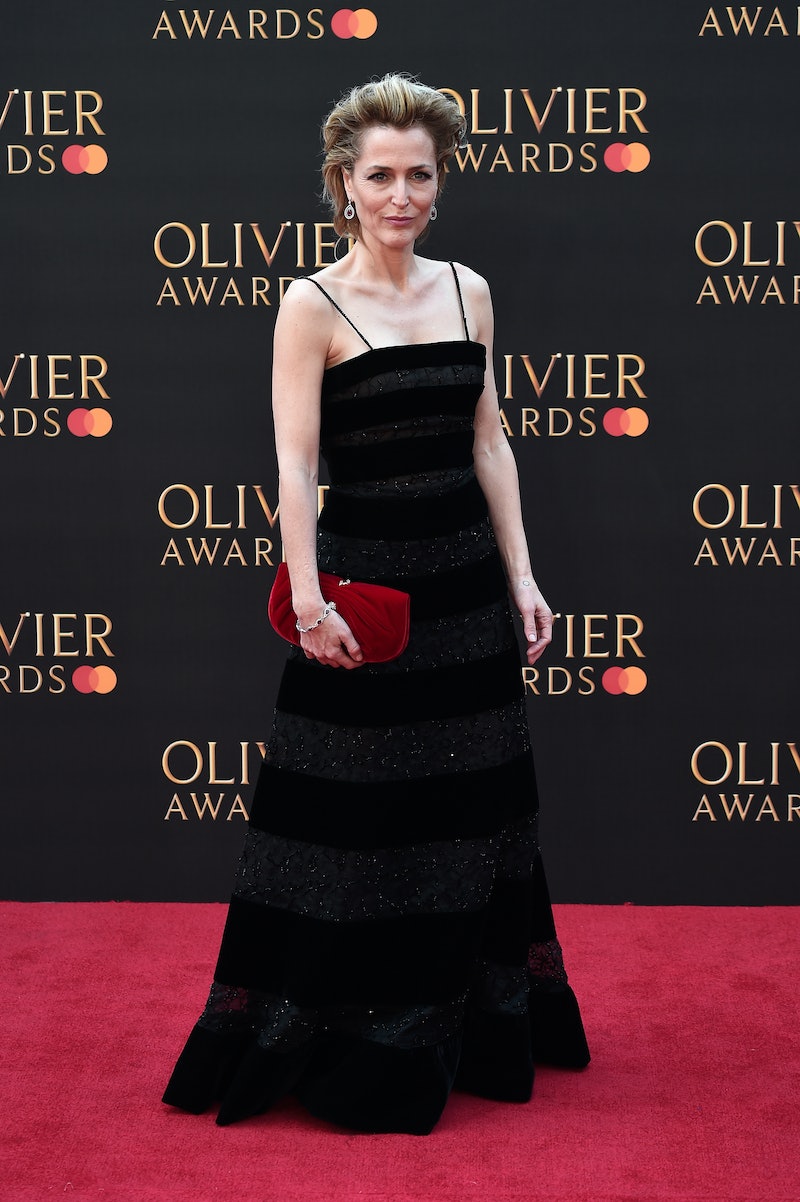 After months of speculation, it's official: Gillian Anderson will play Margaret Thatcher in The Crown Season 4, and she's just as excited about the news as the fans are. Anderson released a statement about joining The Crown that highlights why she's so excited to take on the role of such a divisive individual. Love her or hate her, the first female prime minister of the United Kingdom is sure to provide The X-Files actor with a meaty role, and no one knows that better than Anderson herself.

On Saturday, Sept. 7, Anderson's statement was shared by the official Twitter account for The Crown. "I am so excited to be joining the cast and crew of The Crown and to have the opportunity to portray such a complicated and controversial woman,” Anderson said. "Thatcher was undoubtedly formidable but I am relishing exploring beneath the surface and, dare I say, falling in love with the icon who, whether loved or despised, defined an era."

If there's any downside to this news, it's that fans won't see Anderson until Season 4. First up is Season 3 (premiering Sunday, Nov. 17 on Netflix), which will introduce Olivia Colman as Queen Elizabeth, Tobias Menzies as Prince Philip, and Helena Bonham Carter as Princess Margaret. Meanwhile, Season 4 is already in production, which means fans could see Anderson's Thatcher facing off with Colman's Queen Elizabeth as soon as 2020.

For now, much of Twitter is busy celebrating Anderson's casting, because while Thatcher is far from beloved, the woman who brought Dana Scully to life most definitely is. Twitter user and author @BethMorrey wrote, "OMFG it’s true and I’m just going to have to put myself in stasis until it drops." Another fan, @roisincaird added, "Very much looking forward to being able to use the line 'I haven't felt this sexually conflicted since they cast Gillian Anderson as Margaret Thatcher in The Crown'."

While some people are excited to see how Anderson tackles the controversial politician, others are conflicted to see the actor taking on the role at all. Thatcher served as Prime Minister from 1979 to 1990, and her policies led to high unemployment rates that the U.K. is still feeling the effects of generations later, per The Guardian. As a result, seeing her depicted in The Crown is causing some division among viewers.

However, since the show's aim is to chronicle as much of Queen Elizabeth's reign as possible it would be nearly impossible to not feature Thatcher in some way. As @purplecaz pointed out, "They needed someone with talent to play such a horrible and divisive person. Thatcher was nasty but she is part of our history, sadly. If done honestly, they will show what harm she actually did to the working classes & communities. I’m sure Gillian will do the part justice."

It's clear from her statement that Anderson is eager to bring new dimensions to a public figure that has sparked heated debates for decades. And no matter where you stand on Thatcher, there's no doubt Anderson is up to the task of bringing such a challenging individual to the small screen.