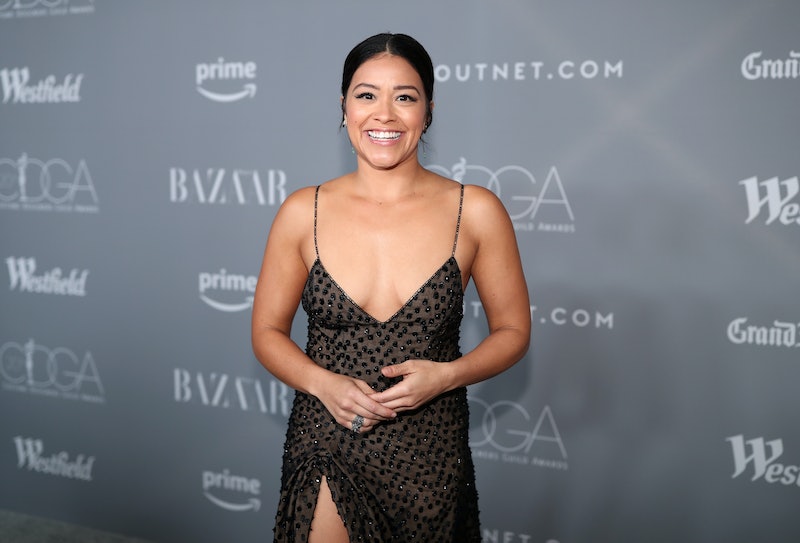 Fresh off the heels of the news that Gina Rodriguez will star in a Netflix rom-com, the actor has another exciting role in the works. Rodriguez will appear on Brooklyn Nine-Nine for an episode, and fans of the Fox sitcom will love the character she's reportedly playing.

It looks like Rodriguez will play a love interest for Stephanie Beatriz's character, Rosa, according to Entertainment Weekly. Rumors about the Jane the Virgin star's guest role started when Terry Crews posted a photo of himself, Beatriz, and Rodriguez outside the Brooklyn Nine-Nine set on Instagram. (The photo has since been deleted, but EW preserved it in a screenshot.)

By EW's account, Rodriguez will only guest star in one episode of the show, so it's safe to assume that any potential romance between her reported character and Rosa's wouldn't be a lasting one. Still, it will be refreshing to see Rosa's love life played out on screen more. Rosa has dated men in the past — remember when Nick Cannon played Holt's nephew? — and, in a recent episode, she came out as bisexual to her parents. But if Rodriguez is playing Rosa's girlfriend, it will be the first time Rosa's been in a same-sex relationship on screen. (Rosa told Charles she was dating a woman, but her girlfriend hasn't appeared on the show yet.)

The announcement comes amid an increased visibility for bisexual characters on TV. On Jane the Virgin, Rodriguez's character dated a bisexual man, Adam. And Jane's Petra is exploring her own budding bi-curiosity, too. In its first season, Grown-ish introduced a bisexual character in Nomi, and the show recently tackled a common bisexual double-standard head-on. There's also How to Get Away with Murder's Annalise Keating, who's had relationships with a woman as well as with men. Riverdale recently introduced an openly bisexual character in Toni Topaz. The Bold Type handled Kat's sexual journey — and her first same-sex relationship — with care. And Crazy Ex-Girlfriend's Darryl had an entire song dispelling myths about bisexuality.

Still, this handful of characters represents a small fraction of all of the figures on TV. A 2017 GLAAD report found that LGBTQ representation among TV characters was at a record high — but those characters still made up just 6.4 percent of characters on broadcast TV. There's definitely progress when it comes to representation, but there's still work to be done to ensure that it's permanent, not just a trend.

In terms of Rodriguez and Beatriz, though, this actually isn't the first time fans have wanted the two actors to play characters they could 'ship together. A viral tweet last August suggested the pair should play "gay superhero girlfriends," and the two of them tweeted that they were on board. So it's no surprise that fans were quick to share their excitement about the Brooklyn Nine-Nine news, too. Plenty of fans tweeted all-caps messages, because they just couldn't contain their excitement about the reports.

If fans' desire to see Beatriz and Rodriguez together on screen helped bring about the guest role, maybe it's not totally out of the question that Rodriguez could appear in more than one episode of the show. There's always a way for exes to reappear in later seasons of TV shows, even if they're not getting back together with their former flames.

Plus, based on fans' reaction to the yet unconfirmed casting news alone, it's safe to say people will want to see more of the Annihilation star on Brooklyn Nine-Nine. But, for now, at least, fans have this episode to look forward to when the show returns — and loads of people to celebrate with while they wait.