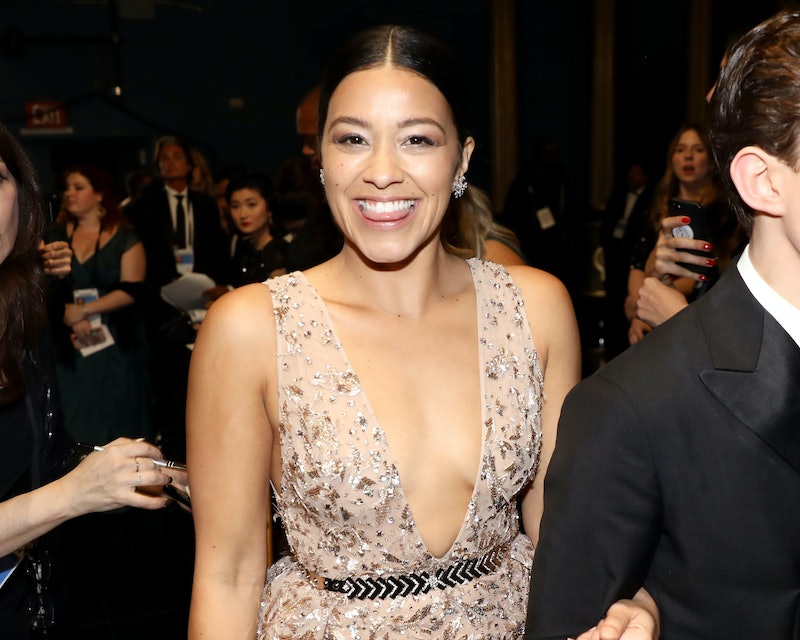 Now that the secret's out of the bag about Gina Rodriguez and Joe LoCicero's engagement, the Jane the Virgin actor hasn't shied away from posting photos of her ring on Instagram. In a sweet photo on Thurdsay night, Rodriguez showed off her engagement ring while wishing LoCicero a happy birthday.

"Happy Birthday to my King," Rodriguez captioned the photo, adding a heart emoji. In the picture, her fiancé is smiling at her, and her ring-clad hand is seen holding his. Rodriguez also shared a sweet surprise in her Instagram Story — Sprinkles Cupcakes sent the couple a set of red velvet cupcakes to congratulate them. The letters on the cupcakes spelled out "tie the knot," which is honestly too cute.

Rodriguez herself recently celebrated her 34th birthday, so it looks like the two of them aren't too far apart in their special days. Having birthdays right around the same time seems pretty nice, and it probably only makes their celebrations that much sweeter.

The Jane the Virgin star confirmed her engagement to multiple outlets, including Bustle, on Tuesday. Her statements came after speculation from fans about her relationship status, thanks to the diamond ring's appearance in Rodriguez's vacation photos from Mexico. Apparently, she and LoCicero have been engaged for a month — they just kept the happy news to themselves at first.

Rodriguez and LoCicero met on the set of Jane, when LoCicero guest-starred as a stripper. Rodriguez later explained on LIVE with Kelly and Ryan that she and LoCicero saw each other at the gym and reconnected after his Jane appearance, and the rest is history. The two of them are a total power couple, too — LoCicero recently shared a photo of Rodriguez supporting him at a Muay Thai event.

Mentioning her love life on Tuesday, Rodriguez told Bustle that one of her vacation photos, which featured a Frida Kahlo quote about surrealism in the caption, may have been a reference to her engagement. She shared the photo on Instagram on July 30, but fans now know that she and LoCicero were happily engaged a few weeks before that. But now that Rodriguez has officially confirmed the big news, it looks like she and LoCicero are celebrating their exciting future together.

In addition to the personal news, Rodriguez has plenty of reasons to be happy about her professional future, too. She just started work on the fifth season of Jane, and she's directing the season's first episode. Rodriguez also has Netflix's Carmen Sandiego on the way, along with the upcoming Netflix movie Someone Great. If that wasn't enough, Rodriguez will also star in the upcoming movie Miss Bala, a remake of a Mexican film about a woman who gets involved with drug trafficking. She's also continuing her work behind the camera beyond Jane and will direct an episode of the Charmed reboot.

It's clear that Rodriguez and LoCicero are super supportive of each other's professional endeavors — they're definitely couple goals. Hopefully, these two have some time in their busy schedules to relax in each other's company and enjoy their engagement, now that they're no longer keeping the news a secret.