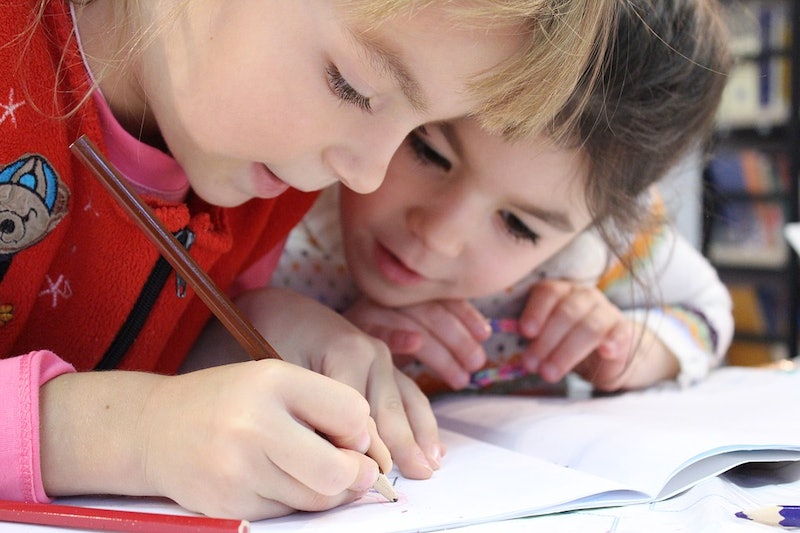 While gendered beliefs about intelligence have, obviously, been a longstanding problem, a new study reveals just how early children are conditioned to tie their intellect to their gender — apparently girls start believing boys are more intelligent as young as six years old. Lin Bian, a psychologist at the University of Illinois, conducted a series of studies with a group of 240 children, presenting different scenarios to them in order to suss out how gendered their beliefs were and gain some insight into when exactly some began to sway their thinking. The first study offered children 96 between the ages of five and seven a scenario:

The children were then shown pictures of four different adults and told to choose who among them was "this person" from the story. Two of the pictures were of women, and the other two of men, and in the group of five-year-olds, the tendency was to choose the person of their own gender to attribute to "really, really smart" and "faster and better than everyone else". The results among the six- and seven-year-olds, however, showed a distinct shift: while the boys were still as likely to attribute these good qualities to their own gender, by that age the girls were less likely to attribute them to their own gender, and tended to evenly split between choosing a man and a woman as the potential subject of the story.

While at first glance it may seem like a good thing that the girls were equally as likely to choose a man or a woman to associate with brilliance, that fact coupled with the fact that the boys were just as likely to choose men is indicative of a much larger issue. The shift that seems to happen between ages five and six in this scenario isn't a stable one, and as Bian points out, it has consequences throughout girls' education and their careers as women. Another of Bian's studies indicated that as early as six, the same age when the shift began, girls were more likely to avoid activities when they were told they were for "really, really smart" kids.

So where do these biases begin? Studies have shown, for instance, that academically, girls tend to outperform boys across the board. But according to another study of Bian's, which asked questions relating to both academic achievement and perception of brilliance, girls did not associate the two factors with each other; this seemed to indicate that although the girls were willing to take credit for their achievements in school, they still did not translate them into personal brilliance.

As the study points out, it is this kind of conditioned thinking that leads women to narrow their options in their educations and careers, explaining the deficit of women in fields associated with brilliance, like philosophy or STEM sciences. In the long-run, it not only negatively affects women, but everyone who could benefit from these fields of research, by depriving the world of the perspectives and potential discoveries of women who are discouraged from pursuing career paths before they can even see if they have a knack for them.

So how exactly do we go about solving these gendered beliefs? Do we try to foster an environment were boys are just as likely to attribute women to brilliance as men, or an environment where women stay as likely to attribute brilliance to themselves as men are? Bian's team has identified where the shift happens, but of course, the next step will be to fully understand how and why — and then get about the business of changing it.