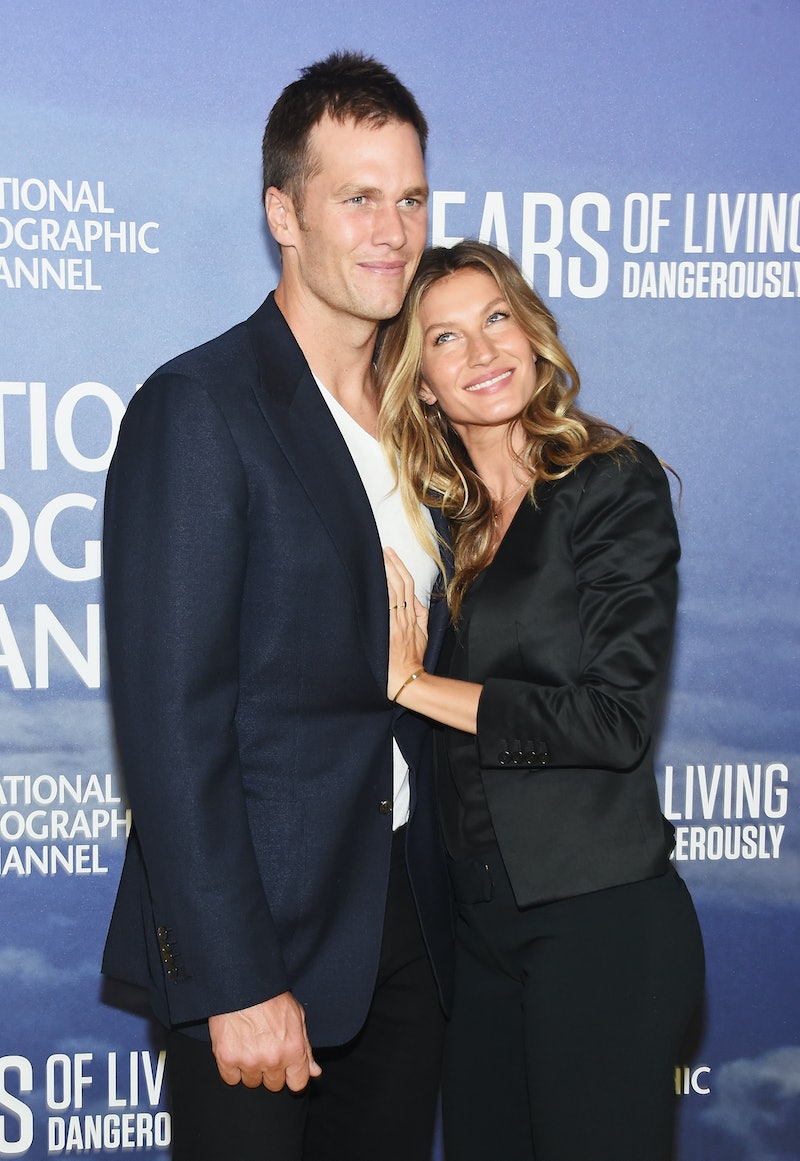 The New England Patriots have a lot of fans and cheerleaders, but one in particular stands out. On Saturday, Feb. 2, Gisele Bündchen shared a message for Tom Brady on Instagram ahead of Super Bowl LIII, and it was so supportive. Bündchen posted a picture posing with Brady on the Mercedes-Benz Stadium field in Atlanta, where the game will take place. She wrote: "I got your back" with a heart emoji. Brady and Bündchen have been together for over 10 years, and tied the knot in 2009, according to Us Weekly. The supermodel's loving message on Instagram shows that these two continue to encourage each other, and that even after all these years, they're still a power couple.

Bündchen's post did not go unnoticed by the quarterback, who responded with a loving message of his own. He wrote, "And I have yours!!!!" with several heart eyes emojis. Fans couldn't get enough of the adorable interaction, and chimed in with their own messages of encouragement. Former Project Runway host Heidi Klum commented with a simple heart emoji, while model Martha Hunt commented, "Go PATS!!!!!!!" with heart and prayer hand emojis. Lindsay Lohan also chimed in with a few prayer hand emojis in the comments, and there were plenty of other Patriots fans wishing the team a successful game as well.

The Bündchen-Brady family are great cheerleaders, and the supermodel's post is getting a head start on the game day support. Super Bowl LIII will have the Patriots facing off against the Los Angeles Rams on Sunday, and it's sure to be a tough game for both teams, as per CBS Sports. This is the third year in a row that the Patriots have made it to the Super Bowl. If the team wins, Brady will take home a record 5th Super Bowl MVP trophy. It's a high stakes game for the quarterback, and it seems that the whole family will be on site to root for him.

On Saturday, Brady shared a family photo of his own on Instagram. The football star has three kids — a son named Jack from a prior relationship with Bridget Moynahan, as well as his daughter named Vivian and son Benny, as per Athlon Sports. All of his kids appeared in the Instagram shot, which he captioned, "Family and Football #LFG" with two heart emojis. The post also included a sweet selfie that he took with Bündchen, and the two look so happy in the photo.

The kids have attended the Super Bowl several times over the years, and Brady's family will all be on site for the event, according to CBS Boston. On Sunday, Bündchen shared a photo of Vivian in a Patriots jersey. The caption read, "Let's go papai!!! Let's go pats!!!" with plenty of star emojis and blue hearts (blue is the team color). The model also shared a supportive message for the quarterback after the Patriots defeated the Chiefs in the playoffs. She wrote, "Great game my love, congratulations! So happy for you and your teammates! #gopats".

There's no way to know who will win the Super Bowl, and it's sure to be a tense evening for the Bündchen-Brady family. However, the longtime football star and his team will have major support from Bündchen and his kids, who will likely be cheering from the sidelines.