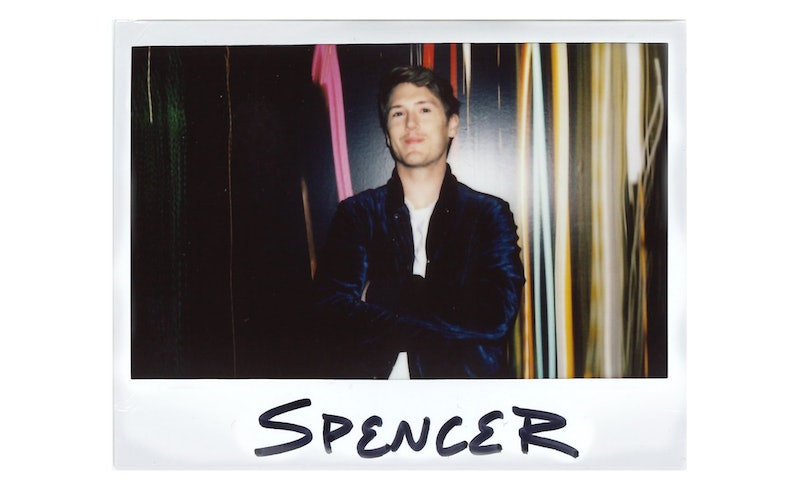 When celebrities hang out with Bustle editors, we want to give them the chance to leave their mark. Literally. So we hand them a pen, a piece of paper, a few questions, and ask them to get creative. The rest is up to them. This time, Glass star Spencer Treat Clark is leaving his mark in the Bustle Booth.

Even though he would be reprising his Unbreakable role as Joseph, the son of Bruce Willis's David Dunn, Spencer Treat Clark wasn't fully confident that he'd appear in Glass — even after director M. Night Shyamalan scheduled a call with him. "The cynic in me was like, 'He’s going to call and tell me that they’re recasting Joseph Dunn with Chris Hemsworth, or somebody [else] insanely famous," the actor laughs. But that wasn't the case, of course — Shyamalan asked if Clark would be up for playing the character again, and then the two caught up on the last 18 years of their lives.

Now 31 and a regular on Animal Kingdom, Clark was just 12-years-old when he first worked with the director, creating the role of Joseph, a normal young boy who starts to believe that his father is an actual superhero. Glass finds David and Joseph working together, both now adults, with the son serving as a sidekick/tech guru of sorts to his vigilante parent. Clark found his old scripts as he was preparing for Glass, the 2019 entry in a trilogy that also includes 2016's Split, and found some helpful notes that he made at the time. "There’s one that says, “Joseph loves his dad,'" he recalls. "And like, yeah, you kind of nailed it, kid!"

The 2000 movie, which pre-dates the current Marvel Cinematic Universe and DC Extended Universe by years, wasn't Clark's first acting job. He'd already appeared in features like Double Jeopardy and Arlington Road, and had a role in another huge film from the same year as Unbreakable: the Oscar-winning Gladiator. But the actor says that, at the time, acting was "just something that was fun" — something he did along with school, music, and hockey. It was later as an adult that he consciously made the decision to prioritize it, going to college in New York so he could continue working and then moving to LA, where he's been for over eight years. (That's where he learned to surf, as he does in character on Animal Kingdom, though, since he started late, Clark says, "I don’t think I’ll ever look particularly stylish.")

In recent years, he's played HYDRA villain Werner von Strucker on Agents of S.H.I.E.L.D., and guested on Mad Men and Criminal Minds, among other series, but Clark still hangs on fondly to memories of filming his first Shyamalan movie, including Samuel L. Jackson (Elijah Price) in his signature shades and beret enthusiastically introducing himself for the first time, and movie-dad Bruce Willis gifting him Led Zeppelin and Beatles CD box sets at wrap. Willis went out of his way to be kind to him, Clark says, remembering one night after a late shoot when Shyamalan had secured — from Steven Spielberg, natch — an original print of Jaws to screen for the cast and crew. When the older actor entered the room, Clark remembers, he came and sat right next to him. "Those guys are just so cool and so warm and they were so good to me then, and are so amazing now," he says of Jackson and Willis.

To be returning to the universe and the character made it special for the actor to revisit Unbreakable as a viewer, though Clark says that he feels completely detached watching the work he did when he was young. "I’m sure it’s riddled with all sorts of stuff that I would do differently," he says, "but it feels almost like a completely different person."

Next up, Clark has a "really cool, really fun" role in the second season of Netflix's Chilling Adventures of Sabrina... which, of course, he can't tell me anything else about. So while you wait on that reveal, check out what the actor had to say for himself in the Bustle Booth: